I'm pretty upset that I missed last month's Asian Food Fest because it's one of my favourite countries - Thailand! I've originally wanted to make some pad thai or green curry but somehow the plans didn't materialise. Hopefully there will be another Thailand theme some time soon!

When I saw the theme for Asian Food Fest this month is Western Asia, falafel came to my mind. Falafel is a deep-fried patty made from ground chickpeas, fava beans or a combination of both. It is a traditional Egyptian food and usually served in a pita or in a flatbread with salads, pickled vegetables, hot sauce and tahini-based sauce.

I first had falafel when I was in Thailand, in one of Bangkok's night market. X and I were looking for a snack and we gave falafel a shot even though we had no idea what it is. We only knew it was deep fried and well, most deep fried stuff are delicious, right? The falafel sandwich was so good and we kept guessing what those fried little balls were made of. We only found out later that it was made from ground chickpeas and/or fava beans and was a very popular street food throughout Middle East. We were really lucky to be able to eat it in Bangkok! I adapted my falafel recipe from 2 sources - Jamie Oliver's and The Shiksa Blog. I tried 2 methods of cooking, frying and baking. I noticed my falafel is still pretty loose and when I tried to fry one, the whole thing disintegrated into small bits, perhaps due to only ½ tablespoon of flour being used. More flour and/or some egg will be needed to bind them together to prevent the balls from falling apart during baking / frying - I've made the adjustment to the recipe below. I love the baked results - it's a lot healthier as it uses less oil and still pretty delicious!

Instead of serving in pita bread (as I can't find them in the supermarket), I served them in tortillas instead. Again, 2 versions! One tortilla was briefly warmed and rolled up with all the vegetables. The other tortilla is warmed until the edges start to become crispy and folded half to hold the fillings together. X and I both love the one that is folded half as the tortilla is crispier, though the one that is rolled up is easier to handle and eat. The falafel wraps are served with a Tzatziki sauce instead of the traditional tahini sauce as I personally prefer the former. Tzatziki is a Greek sauce made of Greek yogurt, cucumber, lemon juice and garlic. It is usually served with meat but I love the combination of the slightly tangy sauce with my falafel.

The next time I make this, I will add in fresh parsley to make its taste stronger! Afterall, falafel is high in protein and fiber. Chickpeas are also low in fat and contains almost no cholestrol! Such a healthy treat should be made more often, right? 😉

I am submitting this post to Asian Food Fest: West Asia, hosted by Shannon from Just As Delish. The roundup can be seen at Shannon's post here!

If you have noticed (and most probably seen it on my Instagram), there is a bottle of beer lurking behind the falafel photos, it's actually a bottle of Tiger Radler! Tiger Radler was launched on 28 November 2013, a new variant and product innovation combining Tiger Beer with natural lemon juice. Given Singapore's hot and humid weather almost all year round, this refreshing drink is always welcome! I love how the lemon taste is not too overpowering and there is a nice balance between the lemon and beer taste. It tasted like a refreshing fizzy lemonade, with alcohol as an added bonus 😉 X is pretty fond of the beer and he bought another bottle recently to eat with his steak!

Tiger Radler is available in both cans (300ml and 500ml) and bottles (300ml pint bottle and 633ml Quartz bottle) and available in all leading retailers - supermarkets and convenience stores; and even in restaurants, pubs and clubs.

Disclaimer: I was gifted with a bottle of Tiger Radler to review, no monetary gift was received. 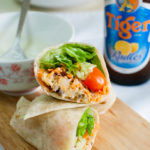 - Adapted from The Shiksa Blog and Jamie Oliver
Tried this recipe?Mention @foodiebaker or tag #foodiebaker! 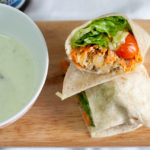