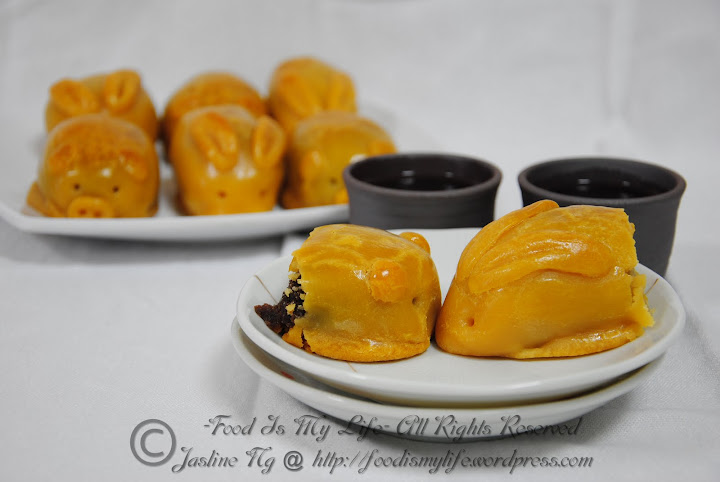 This is a story about a piggie meeting a bunny... not.

Today is the 15th day of the eighth month in the Chinese Lunar Calendar... so... Happy Mid-Autumn Festival! Also known as Lantern Festival or Mooncake Festival, it is a popular festival for the Chinese besides the Lunar Chinese New Year.

When I was younger, my brother and I would participate in Mid-Autumn Festival hosted by Community Centres. We would carry lanterns lit with candles and walk around the neighbourhood with all the other children, while our parents savour delicious traditional mooncakes and yum cha (drink Chinese tea).

Traditional mooncakes are baked and have a white lotus or red been filling. Most of the time there will be melon seeds inside for the extra crunch and a salted egg yolk to balance the sweetness of the mooncake.

Despite the many new flavours that has sprouted all over the years, I still like my traditional baked mooncakes. And one of my favourites are the piggy mooncakes. (: 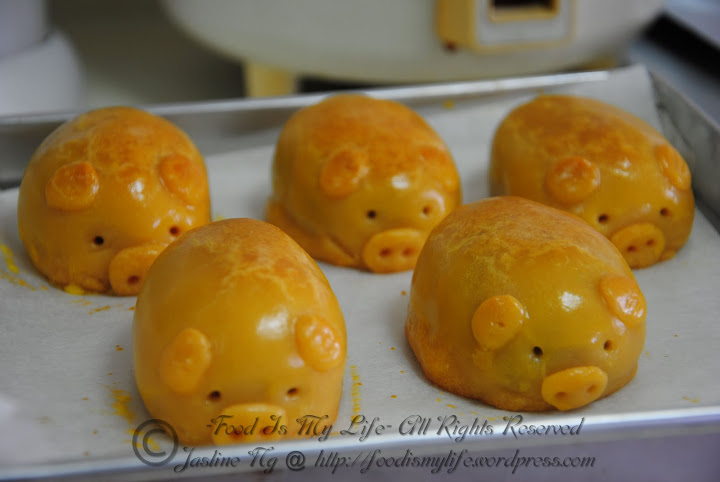 This year, instead of buying piggy mooncakes from bakeries, I decided to try making them for this year's Mid-Autumn Festival. I was worried that the mooncakes won't be nice, but they turned out better than I had expected! (:

I did lots of research before I make the mooncakes, and I finally settled on Anncoo's recipe, with several modifications on my side (: 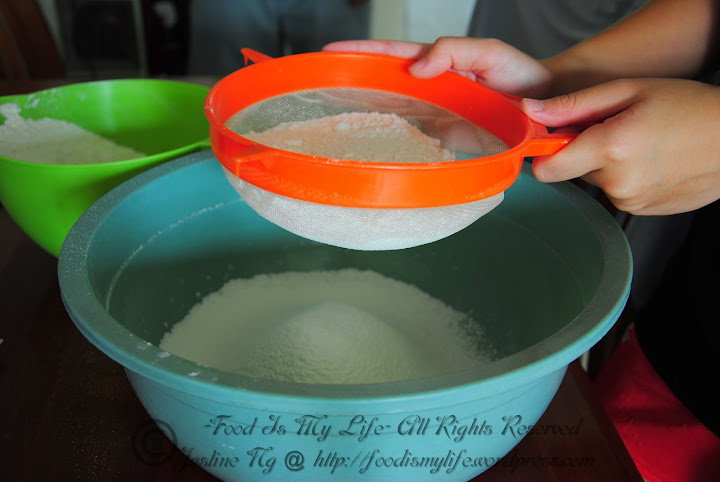 Sift the flour into a huge bowl. 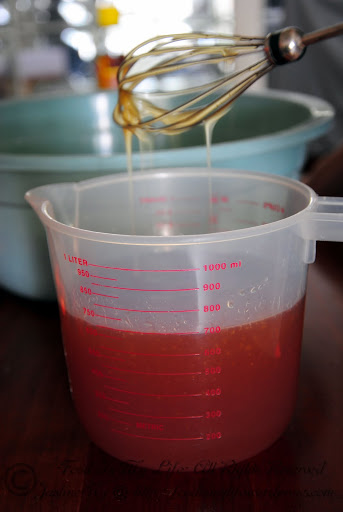 Lye water, aka kan sui, aka alkaline water, is an essential ingredient in the making of mooncakes. I have no idea how it affects the crust and whats-not, but I just know that I need it to make the mooncakes' crust.

It's not very expensive, about SGD$1.50 for a small bottle, and it can be found at bakeware stores and hypermarkets.

There will be two layers (the oil and the syrup layer) at first, and it'll seem impossible to mix them up, but be patient! (: 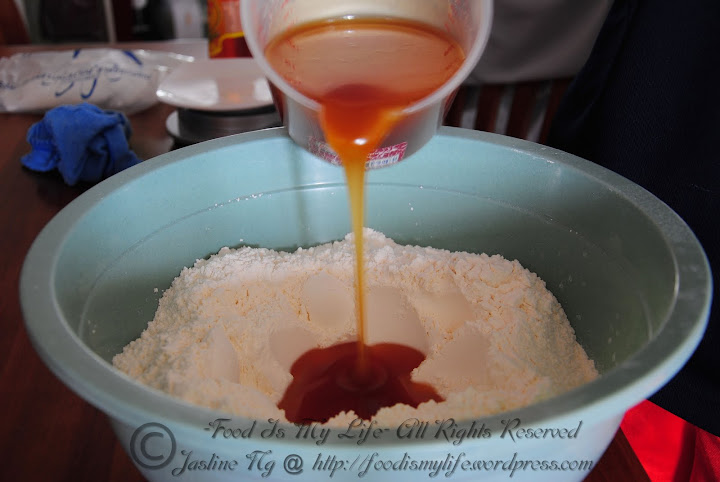 In goes the syrup mixture... 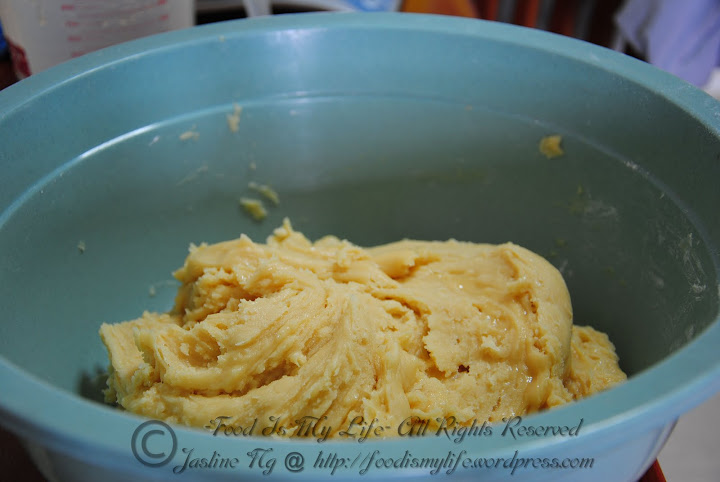 Mix the flour and syrup together until a soft dough forms. 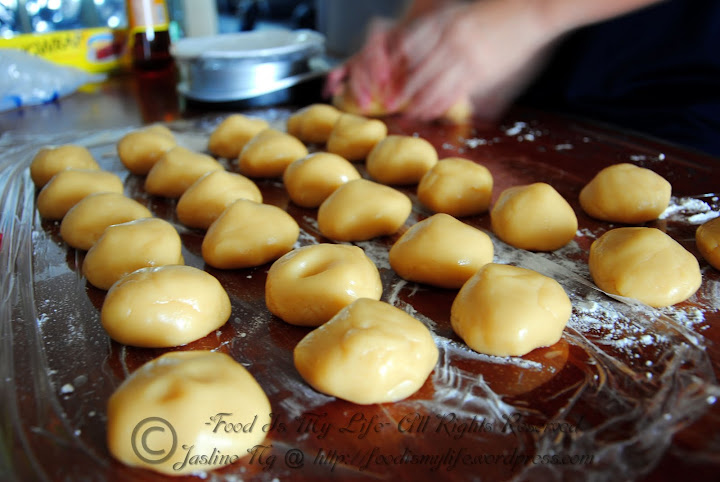 After resting, the dough is kneaded lightly and then divided... 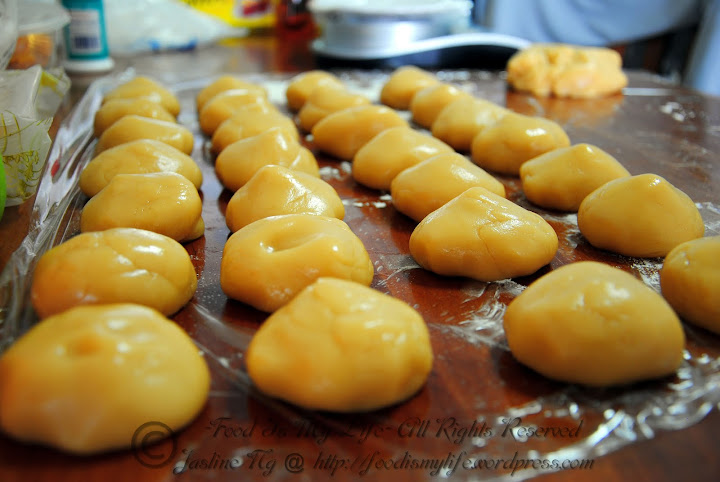 Precision and accuracy matters when making mooncakes, so it's better to weigh each portion to ensure you get evenly-sized mooncakes. 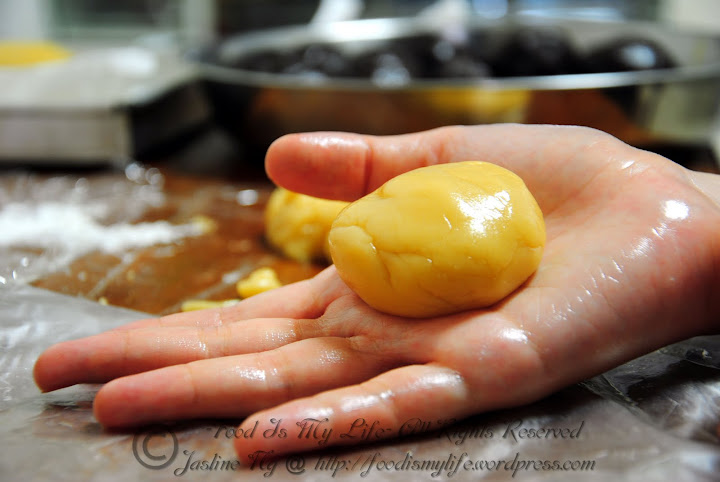 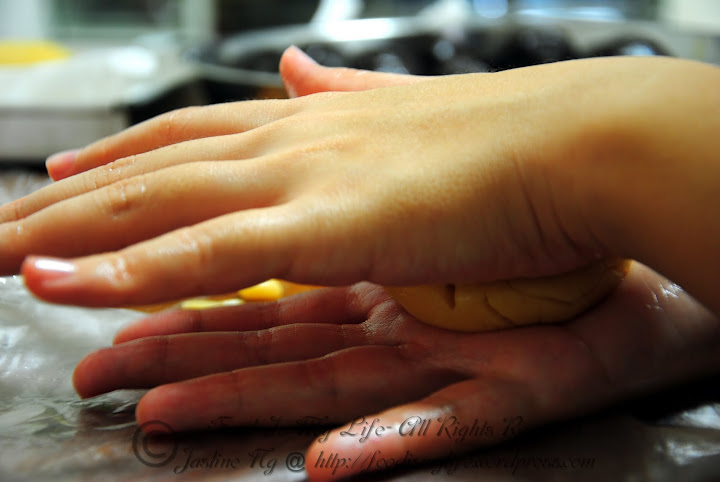 ... And flatten it slightly 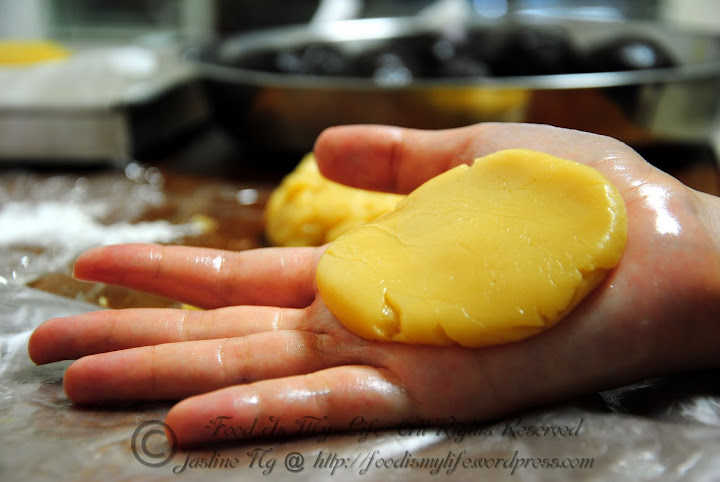 The sides of the dough should be thinner than the center. 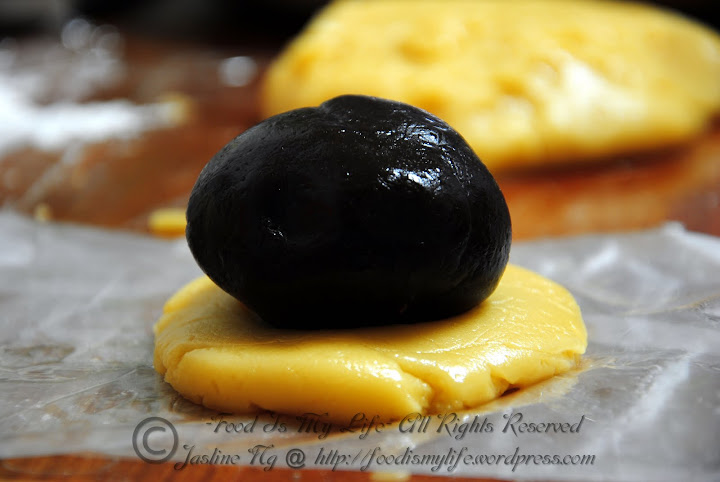 Place the ball of filling in the middle... 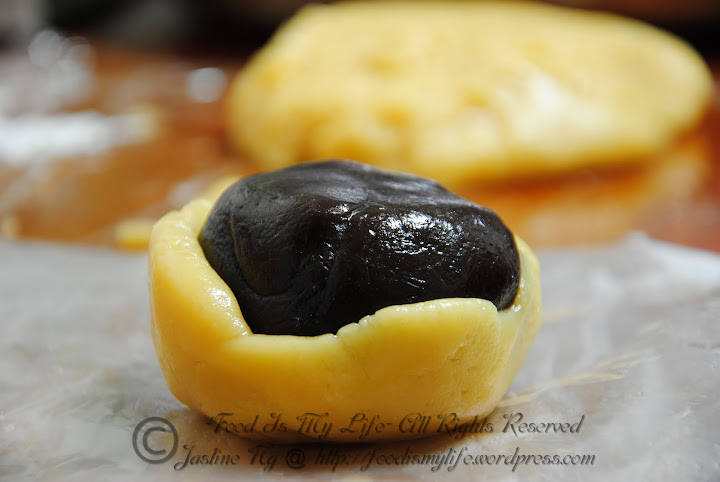 The white lotus paste is less oily, hence it's more manageable and easier to enclose it as compared to the red bean paste. Use your fingers to gently press the thick sides of the dough up to enclose the paste. It takes a little bit of practice (: 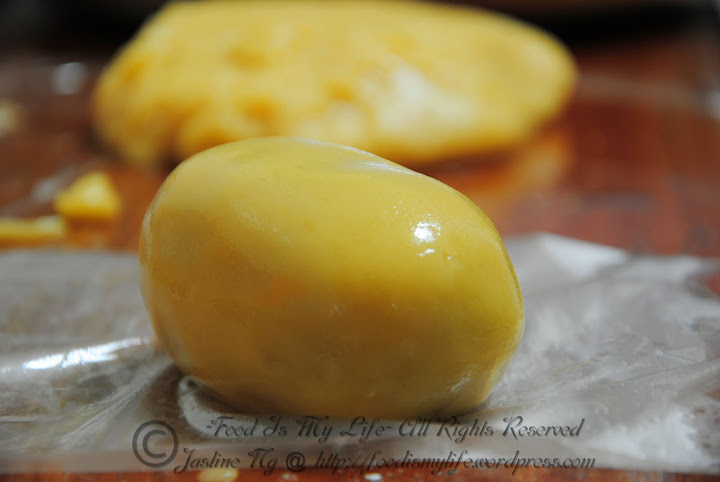 Time to shape the piggies! Roll into an egg / oval shape. 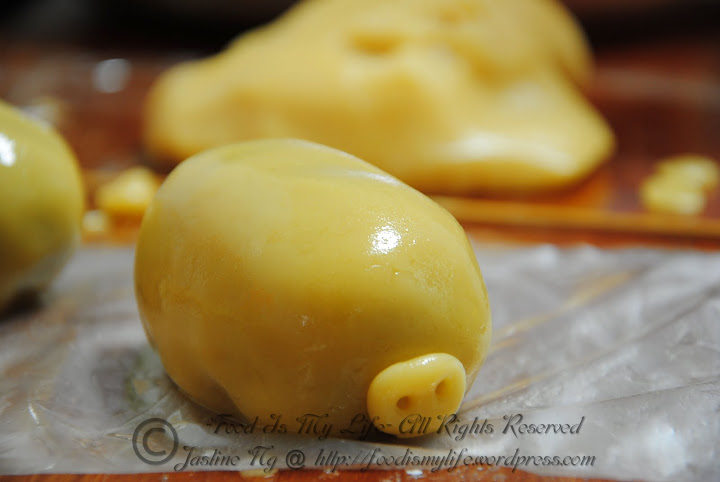 Use the extra dough and make the nose. 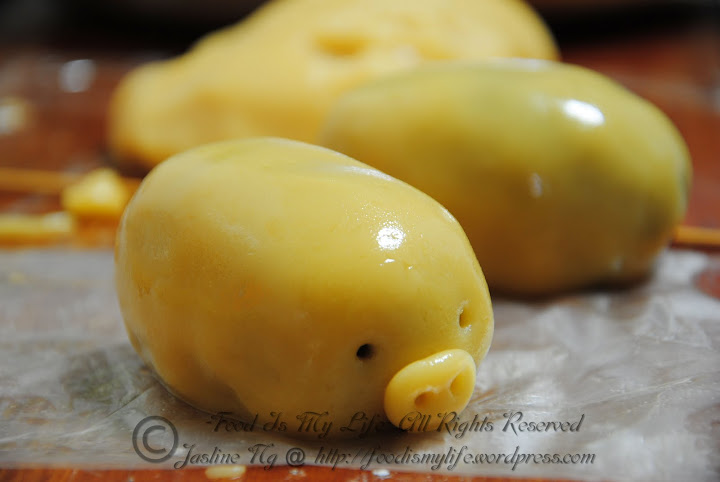 Poke the eyes with a satay stick. 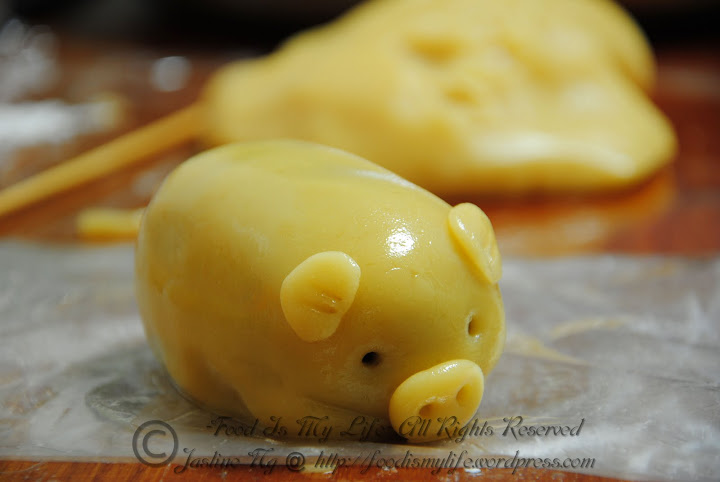 Two small dough for the ears... 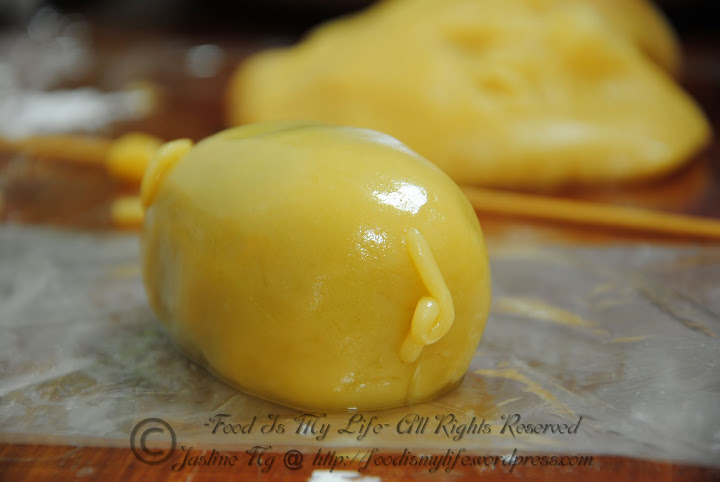 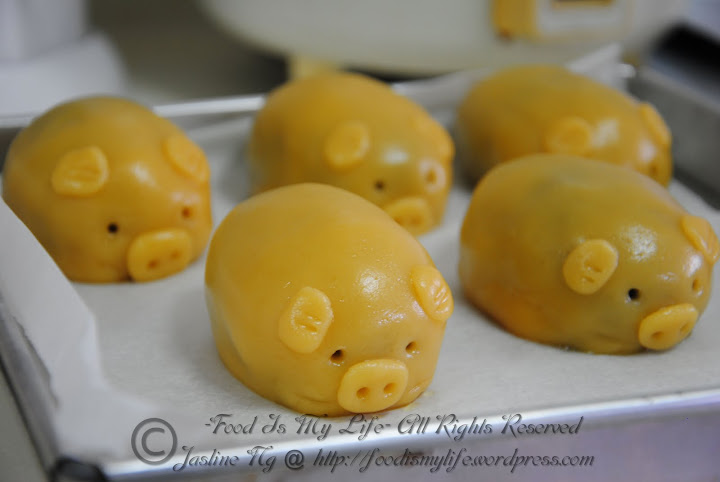 Ready to be baked!

And then I thought... why not make some rabbits? 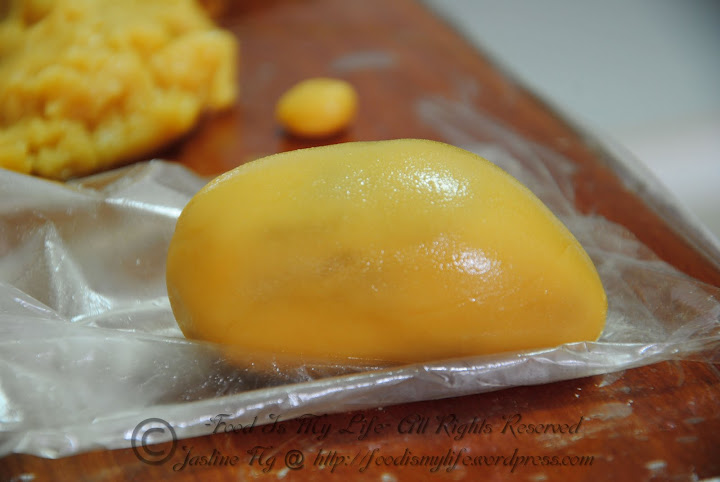 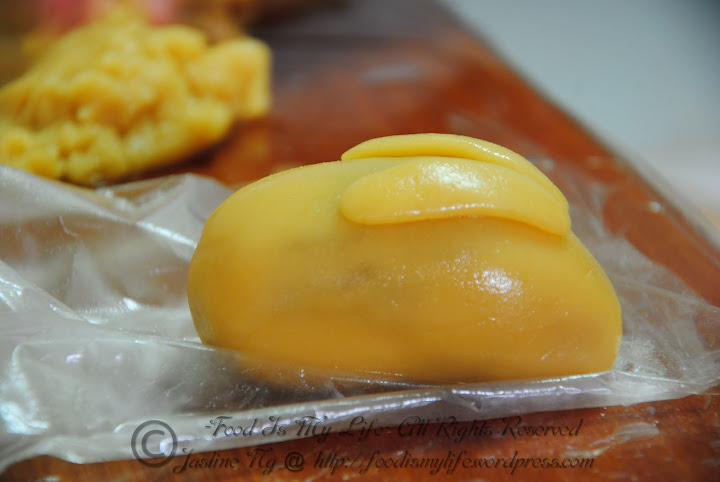 Two long pieces of dough for the ears... 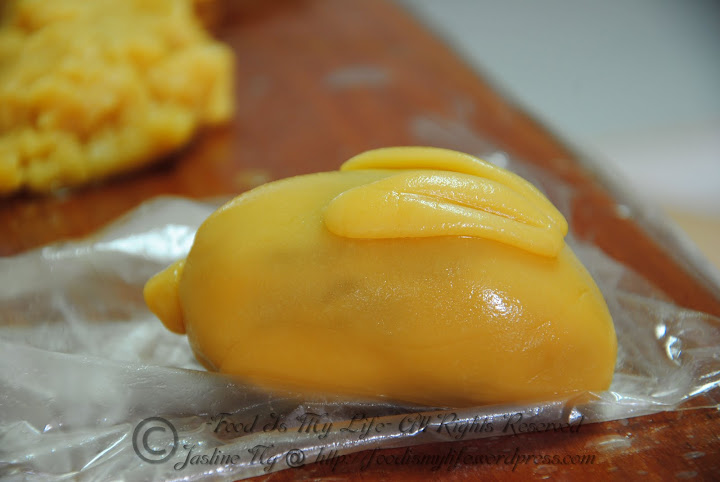 ... And one small dough for the not-so-fluffy tail. 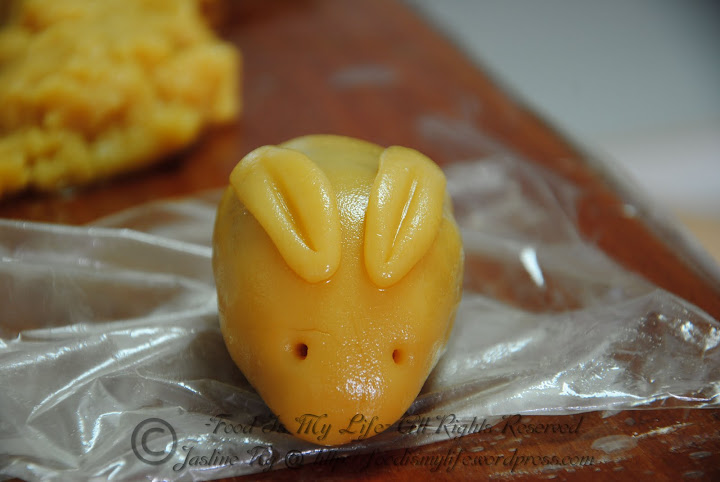 Poke the eyes with the satay stick and you get a bunny! 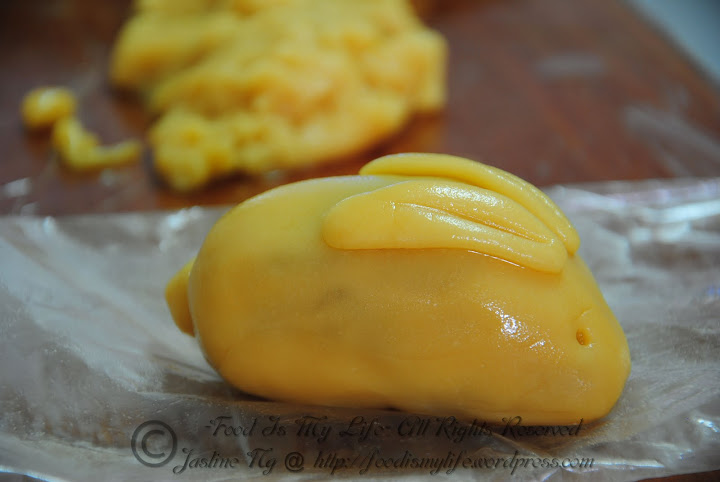 Ready to be baked too (: 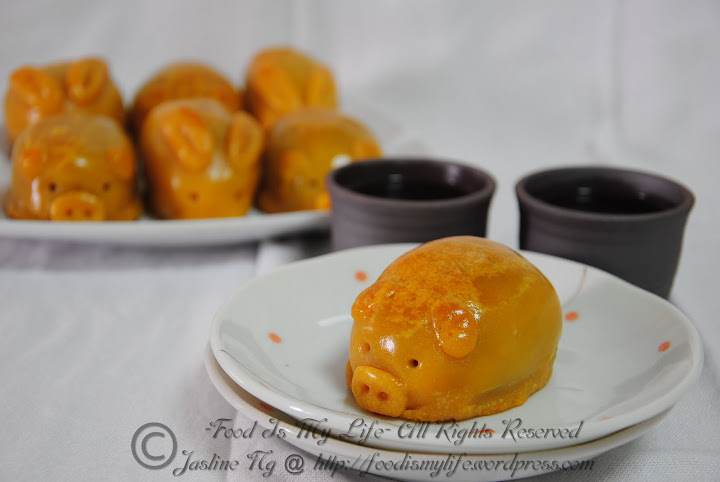 Kids will love them, adults will go ga-ga (I think!) 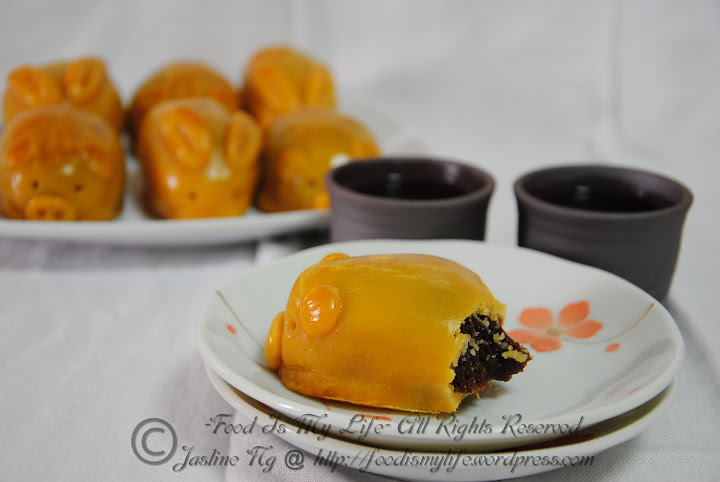 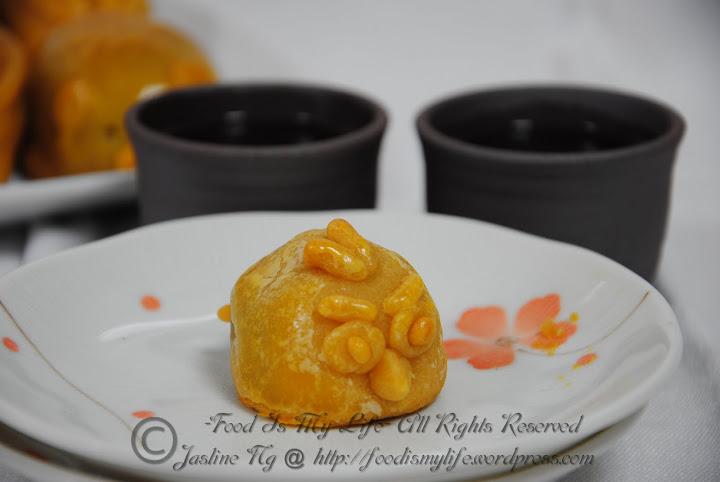 And as I was making the piggies... another animal crossed my mind...

Yes, an angry bird! (I made it with leftover dough and filling) 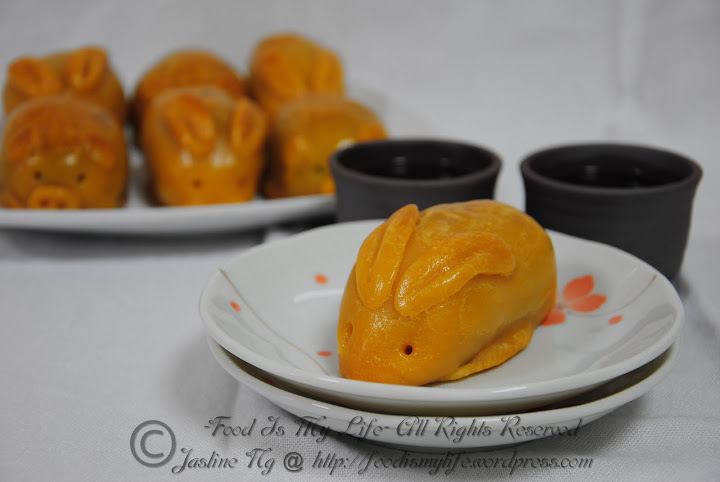 The cute rabbit which tastes so yummy inside! 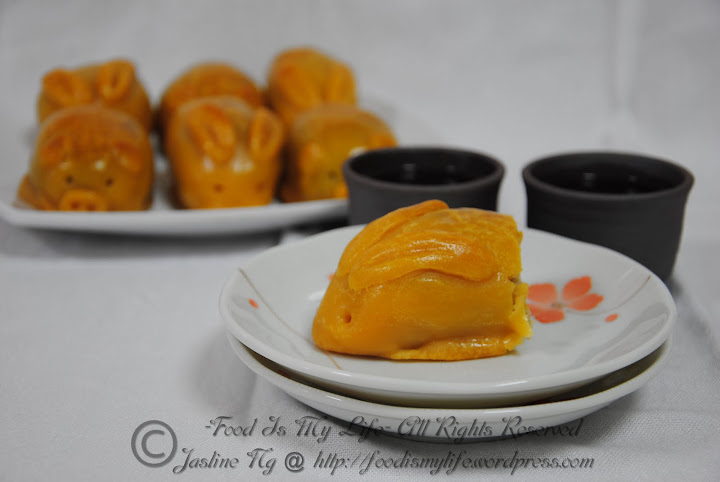 I am submitting this recipe to Aspiring Bakers #11: Mid-Autumn Treats (September 2011), hosted by Happy Home Baking.

Sift the all-purpose flour in a large bowl, making a well in the center.

Whisk the golden syrup, alkaline water and peanut oil together until sticky. It will take a while for the oil to mix with the syrup, be patient!

Pour the golden syrup mixture into the flour well and, using a rubber spatula, mix and form a soft dough. Cover and let rest for 30 minutes.

Meanwhile, divide the red bean and white lotus paste into 28 portions (71-72 grams each).

Lightly dust some flour on the table and knead the dough till smooth, don’t over-knead. Divide the dough into 50 grams each. The leftover dough will be used to shape the ears, noses, tails etc.

Using your hands, flatten the dough slightly - the sides should be thinner than the centre of the dough. Place one ball of filling in the middle and gently press the dough with your fingers to enclose the dough.

To make the PIGGIES:

Roll the dough into an egg / oval shape.

Pinch off a piece of dough. Roll into a ball and flatten slightly into an oval shape. Poke 2 holes using a satay stick to form the nose. Press the nose onto the dough.

Poke two eyes above the nose using a satay stick.

Pinch off two more pieces of dough, smaller than the previous one. Roll into a ball and flatten to form two ovals. Press onto the dough. Press two lines on each ear using a satay stick.

Pinch off an even smaller ball of dough. Roll into a strip and form the tail. Press it onto the back of the piggy.

To make the BUNNIES:

Roll the dough into an long, over shape. Flatten one end of the dough at a 45 degrees angle to form the bunny face.

Pinch off two pieces of dough. Roll into an oval and flatten them to form the ear. Press onto the dough and press a line on each ear using a satay stick.

Poke two eyes below the ears using a satay stick.

Pinch off a small piece of dough and press on the back of the bunny for the tail.

Preheat the oven to 180 degrees Celsius.

Combine the egg yolks and water to form the egg wash.

Brush the mooncakes with egg wash again. This time, brush the whole body, including the ears, noses and tails. Bake for 8 minutes. Remove from the oven, brush one last thin layer of egg wash, rotate the tray 180 degrees and bake for another 3 minutes. Place the tray on the wire rack to cool completely.

Store the mooncakes in an air-tight container for 1-2 days before serving. 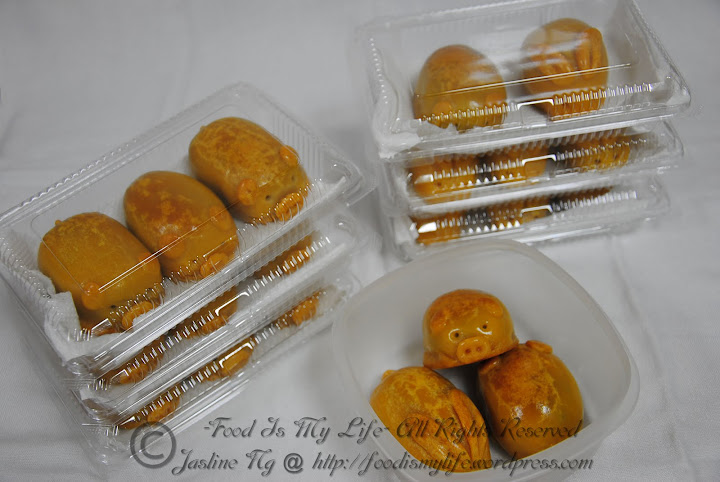 A very happy Mid-Autumn Festival to everyone! (: