So... I had some leftover canned pineapple rings after using some to cook a pineapple chicken dish (the recipe ain't very good so I'm not sharing it), and I've been wanting to make a foster for a really long time (been dying to set some pan on fire!), so I've decided to twist the popular Bananas Foster into a Pineapple version.

And it's really delicious and surprisingly easy too! I know - the scoop of ice cream is wayyyy over-sized...

In case you are a food history nut like me: Bananas Foster was created by Paul Blangé at the Brennan's Restaurant, and named after the owner's (Owen Brennan) friend, Richard Foster. It is a dessert made by first cooking butter, brown sugar and cinnamon together, then bananas are added, followed by rum. The alcohol is then ignited and served with ice cream.

The process of igniting alcohol is known as "flambé", which means flamed in French. This process infuses the dish with aroma and flavour and take off some harshness from the high-proof spirits. Rum, cognac, cointreau and other flavoured liqueurs with about 40% alcohol content are suitable to be flambé.

I found several pineapple versions, but none of them used canned pineapples and I wasn't really in the mood to cook the butter and brown sugar together, but I was totally in the mood to set.some.fire learn how to flambé, so I decided to create a not-so-authentic but still delicious version. Melt some butter in a small, non-stick saucepan. Place the pineapple rings in the melted butter and cook until both sides are starting to caramelize - the sides will browned and darken - don't leave the pineapples unattended! You might end up burning them without realizing, keep checking them frequently so you don't end up with slices of burnt pineapple.

Of course, you can use more pineapples - I definitely would in the future! In fact, I actually wanted to stack a lot of pineapple rings together and top with a scoop of ice cream, but since I only had 2 pineapple rings left, well, I have to save the pineapple tower for the next time. Once the pineapples have turned nice and slightly caramelize-y, pour in some of the syrup used to soak the pineapples in and bring it to a boil and reduce it a little. It's a really intense, sweet dessert, and definitely not for those watching their sugar intake, but... once in a while won't hurt, right? Take the pan off the heat and add in the rum.

Here's where the fun is coming!

But before that, if you are the first time doing it, stay very cool, calm and collected. You will probably get really excited, like me! Hover the pan over the fire, swirling the pan. Tilt the pan slightly forward towards the flame (but without the sauce pouring out) and the alcohol should catch fire almost immediately!

My eyes widened and my mouth opened into a big "O" as I watched the flames danced in front of me - then I realized I need to take a photo.

It wasn't as difficult as I thought it would be! Spoon the pineapple and the sauce out and serve with a scoop of ice cream - I didn't have vanilla so I used rum and raisin - double alcohol boost!

My sauce is pretty thin and not as dark in colour as compared to the sauce made using butter and brown sugar - but hey, this is a cheat so there's bound to be differences. Now that I have learned how to do a flambéing, I'm really looking forward to make the original Bananas Foster or the popular Crepes Suzette! 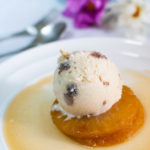