Everyone loves to celebrate Christmas with log cakes (aka yule logs), and I am no exception. Last year was my first attempt in making a log cake - a chocolate genoise with peanut butter buttercream frosting, covered with a layer of chocolate meringue buttercream, which looks like this: This year, I decided to bake a slightly different log cake - one that is less sinful but still has the appearance of a log cake. I happened to chance upon a very interesting recipe book, written by Junko. Junko creates these very pretty patterned swiss roll cakes, which I've linked at the bottom. I was amazed and totally inspired by her cakes, so I used Junko's idea and baked a "wooden" log cake. The white stripes are actually plain vanilla genoise. The brown parts - well I'm sure it's pretty obvious - are chocolate genoise. I'm pretty pleased with the appearance of the genoise, it turned out pretty not bad for my first attempt 😉 The genoise was made using the separation of egg yolks and egg whites method, which was a new method for me. Sadly, the genoise didn't turn out as soft as I would have wanted it to be, which is probably due to my lousy genoise making skills (will have to practise more!) I used a very simple filling - Varlhona dark chocolate mousse, which all my friends liked. Overall, I will have to make improvements on the texture of the cake, but it is definitely a cake that I will be making more often, as it's so much less sinful than normal log cakes! 😉

On to the step-by-step photos! Fill the genoise with the chocolate mousse, roll, and serve!

Happy baking and have a Merry Christmas to all of you! Happy holidays! 🙂 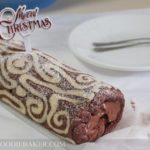 adapted from Junko's Swiss Rolls (see here for a review of the cookbook)
(The above link goes to a website where the blogger does a review of Junko's cookbook, the cookbook is in Japanese and no translation is available. I got mine when I was in Taiwan and it was a translated copy in Chinese. I've not seen an English copy around, if you know where to get it, do let me know!)
Tried this recipe?Mention @foodiebaker or tag #foodiebaker!