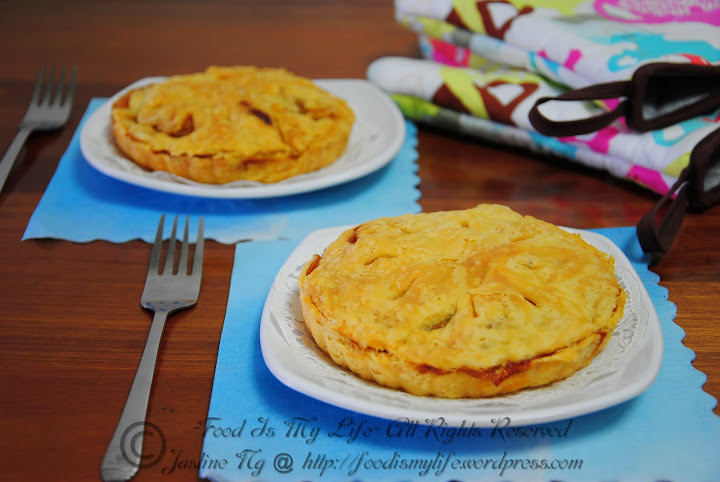 The exterior is perfectly golden-brown and is rich and buttery. It is so delicate and flaky that it threatens to give way any minute. The interior is sweet, caramel-y and oozing with deliciousness, with a hint of cinnamon that gives the extra kick. The exterior and interior combine to give a concoction that will make one yearn for more, licking one’s fingers to savour the goodness and will simply make one go, “Mmmmm…”

And yes, it’s an apple pie!

The thought of making a pie crust from scratch puts me off because it has always seemed so difficult and messy, but in conjunction with Aspiring Baker #10, I finally mustered enough courage to bake… a pie.

And indeed: it’s messy; it’s a little bit daunting; it’s slightly tedious; but the results are fantastic, and it was much more manageable than I had previously thought.

Which is obviously a good thing! Because besides baking an apple pie, I had ventured further and baked some juicy-licious blueberry tarts and oh-so-ever-awesome Nutella tarts. Will share the recipes soon!

So, without further ado, the baking process (: 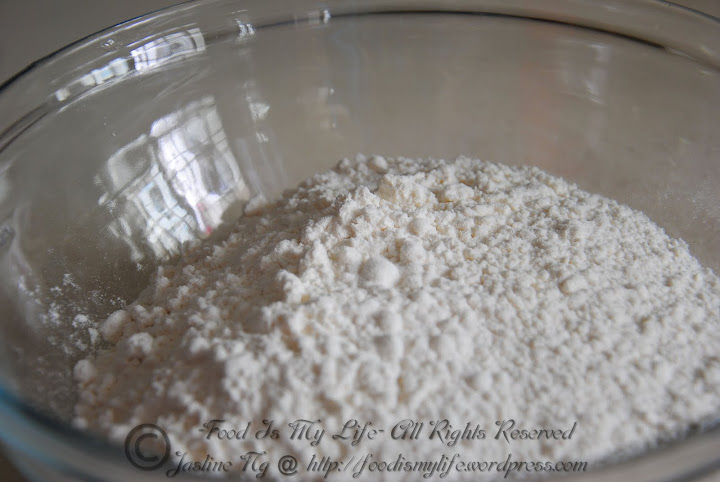 Start off with some plain flour and salt. Put it in a large mixing bowl. And by large, it means really large. Makes it easier for you to blend everything together without spilling flour all over.

The bowl you see here is not big enough at all (because in the later pictures, you will realize I’ve transferred the mixture to an even bigger mixing bowl… hehe.) 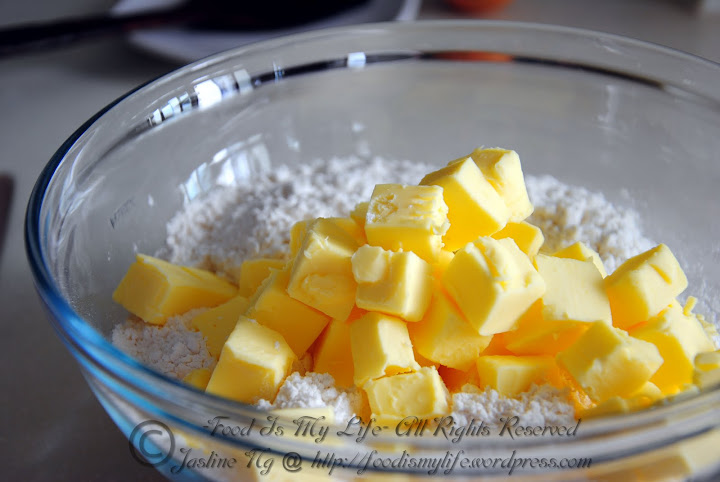 Cut up some extremely cold, best-quality unsalted butter into small cubes and add it into the flour. What I did is cut up the butter the night before and refrigerate the cubes until the next day.

The best butter should be use to ensure you have a rich and buttery crust. (: 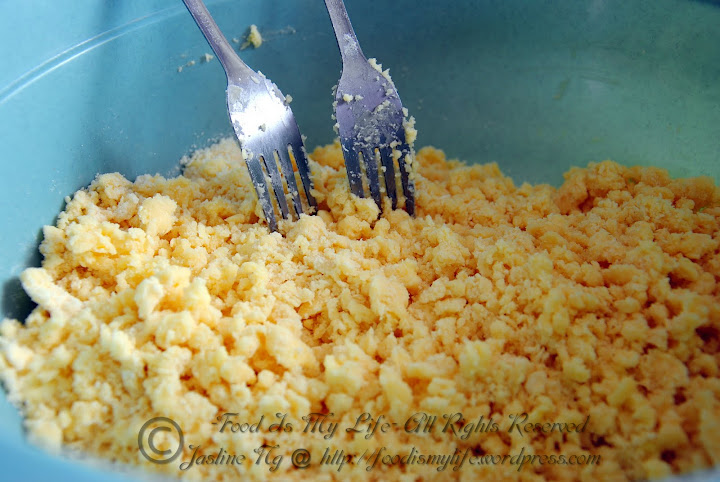 This takes time and it is the most tedious part in the crust-making, but the results are definitely worth it. Try to work the butter into the flour as fast as possible to prevent the butter from melting.

The end result: the flour mixture should look like damp sand and has only pea-sized flour/butter mixture. Nothing bigger than that. 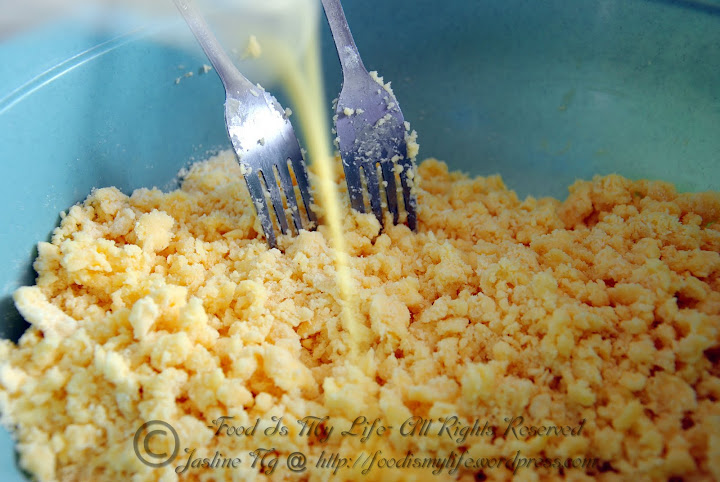 Mix an egg with some vinegar and ice-cold water and add it into the mixture. 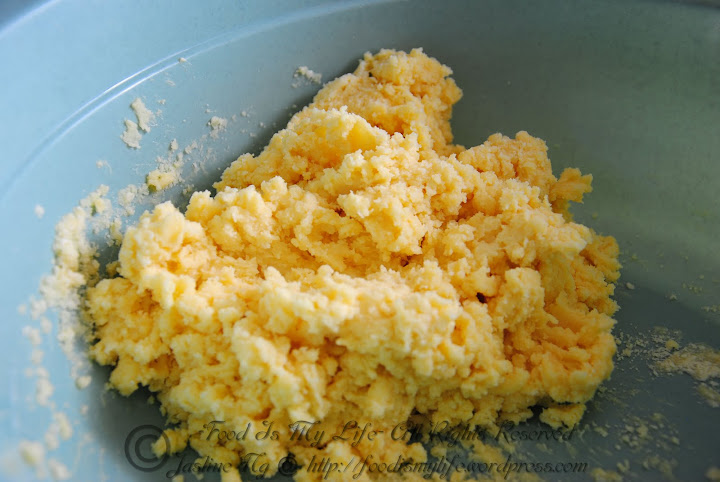 Stir gently until the mixture comes together and forms a dough. 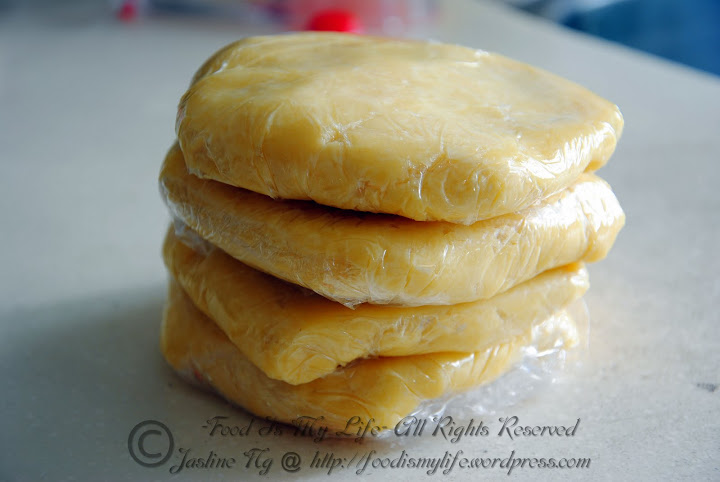 Divide the dough into 2 or 4 and refrigerate for at least 30 minutes. I divided into 4 because I’m only using 2 of them to make apple pie and the other 2 to make other tarts. 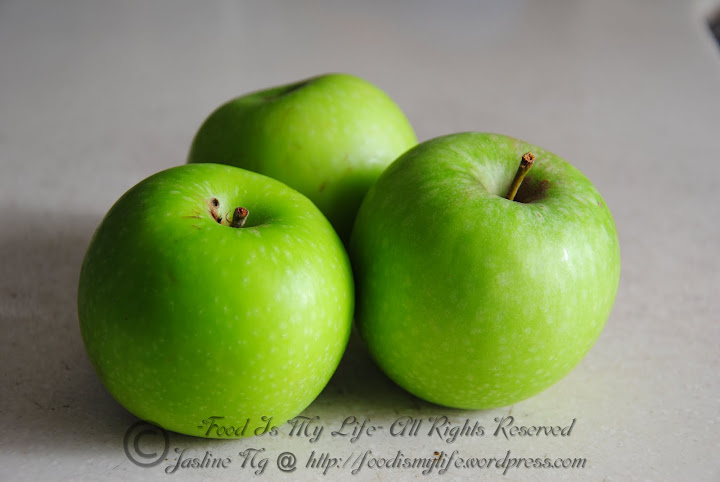 While refrigerating the pie, grab some tart eating apples. 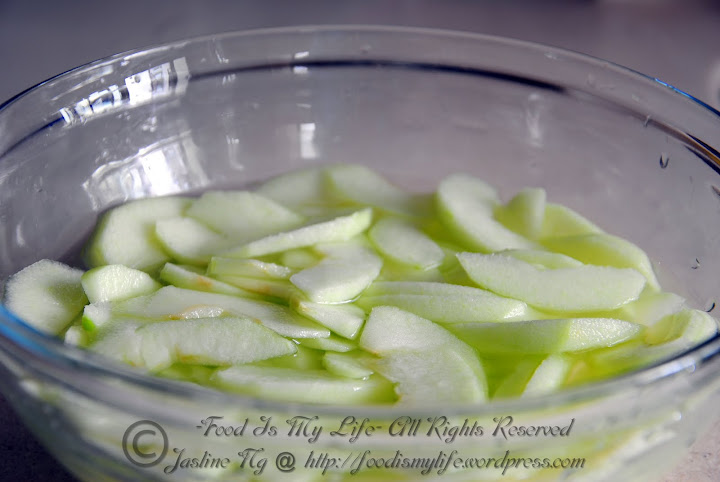 Peel, core and slice the apples thinly. Soak them in tap water. Add in the lemon juice to prevent the apple from turning brown. 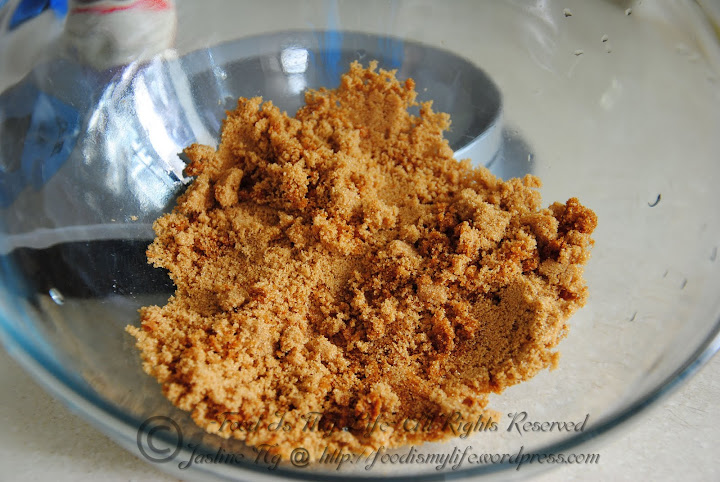 In a mixing bowl, add in brown sugar... 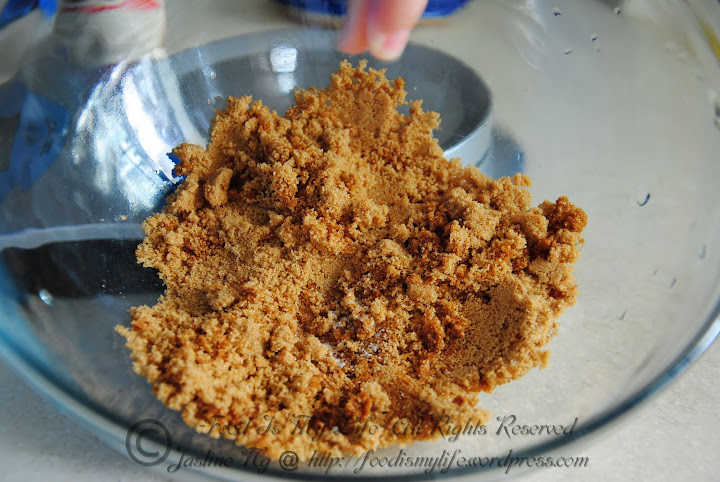 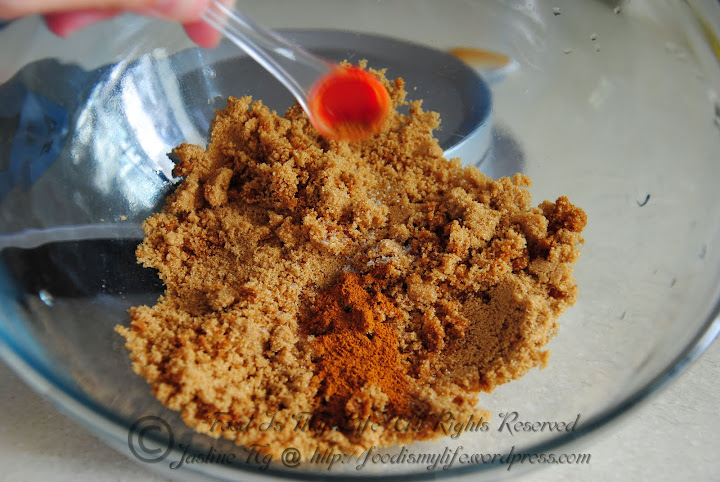 Cinnamon and nutmeg (if using)... 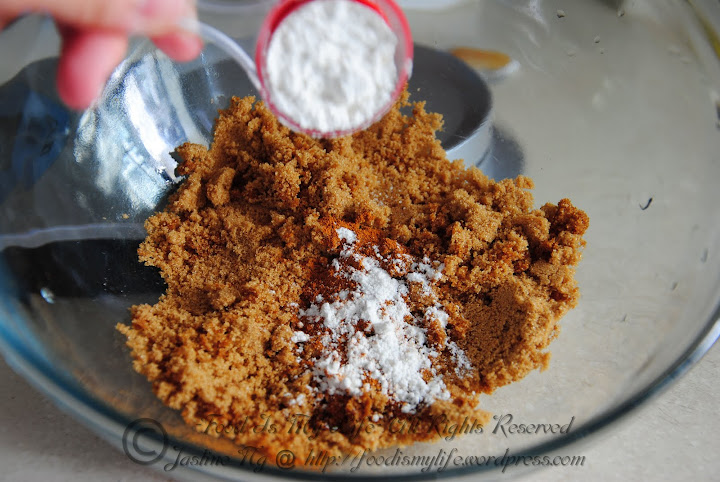 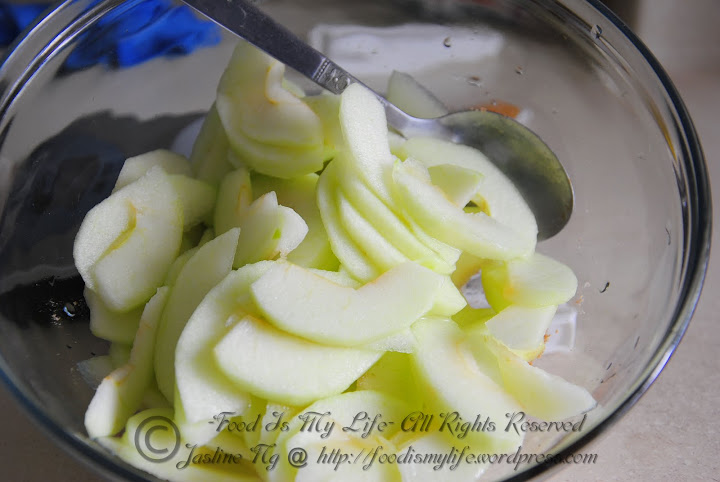 Mix the sugar mixture up. Drain the apples well and dump all the apples inside. 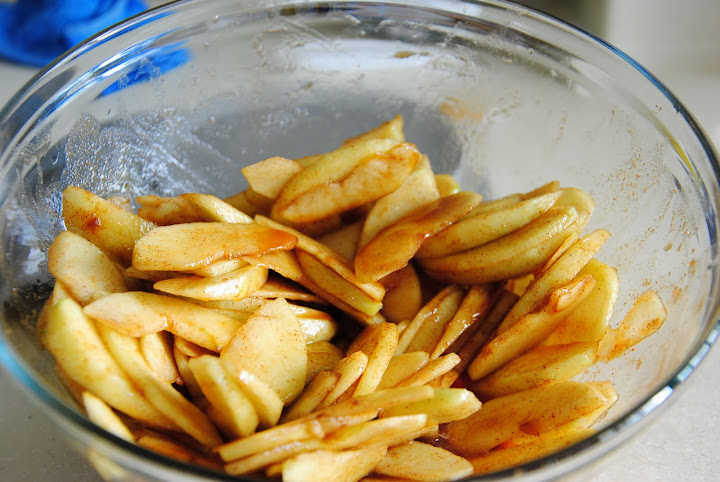 Stir until all the apples are coated with the delicious mixture.

They are so yummy that I can't help popping them into my mouth. 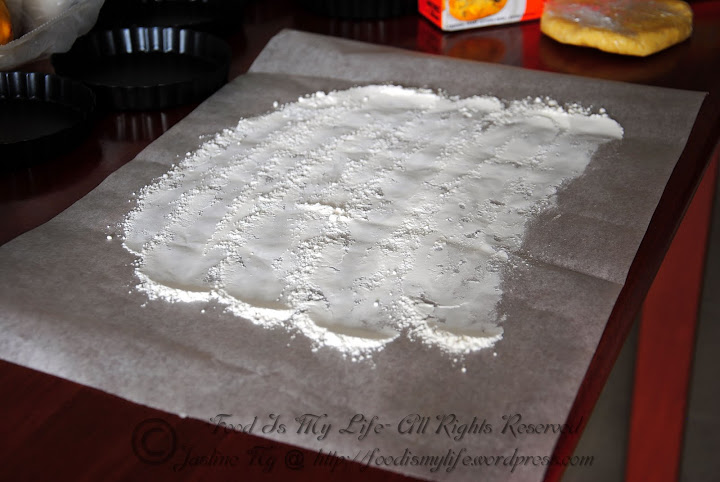 Prepare a parchment paper and sprinkle flour on it. I find that this way can help to prevent the dough from sticking onto the surface, and it'll be easier to clean up afterwards too (though I still made a mess after that...). 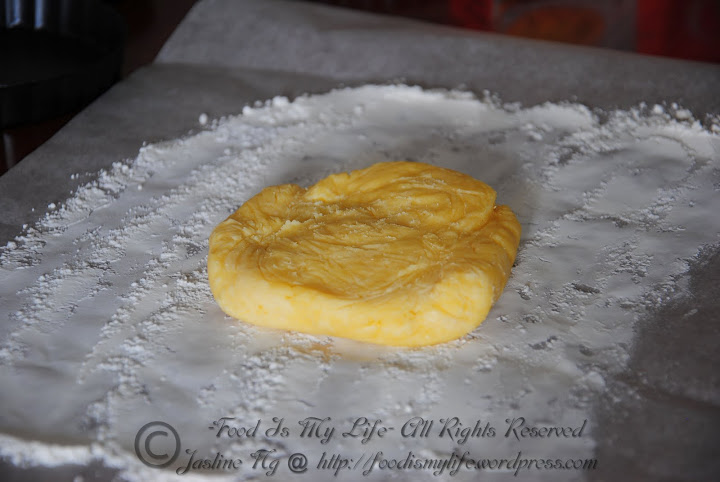 The dough goes on top the flour... 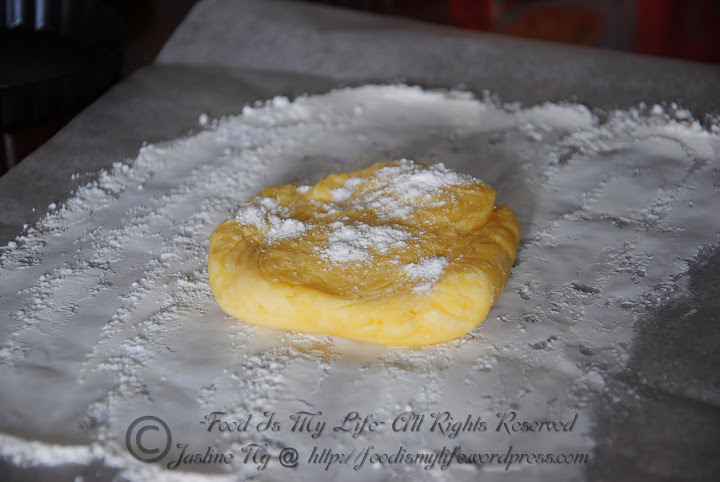 And more flour goes on top of the dough.

Roll it out until it's ⅛-inch thick, you can make it thicker if you want. 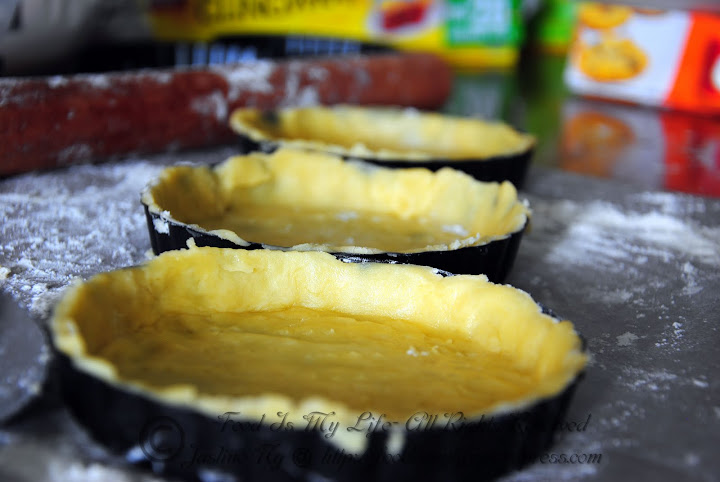 To make mini tarts, cut out rounds and position them into the tart pans, pressing them down using your knuckles. Patch up with the remaining dough if needed.

My dough at this stage look terribly ugly - I just can't patch it up properly, but it'll all be covered by apples later... so doesn't really matter I guess! 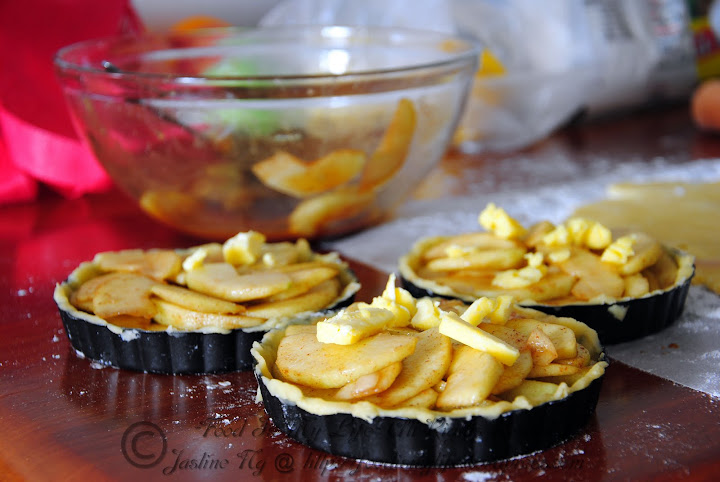 Line the tart pans with apples - the apples will shrink and soften during baking, so do pile more apples on top! Dot with some unsalted butter. 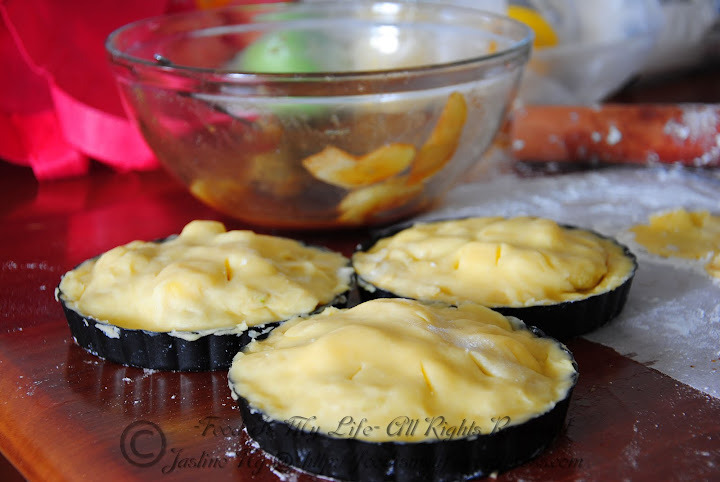 Roll out the other piece of dough, cut out rounds and put it on top of the tart pan. Press down to seal the edges.

Make some slits to allow the steam to escape during baking. 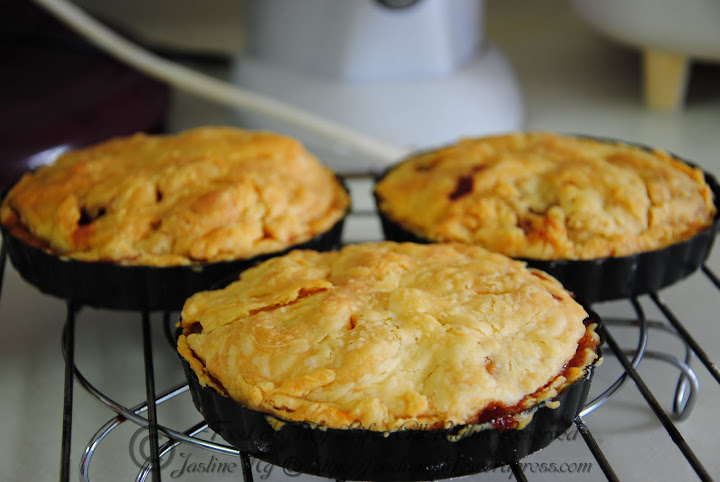 Bake, bake and bake away!

The apple sauce will bubble and drip all over, so remember to put a baking sheet below the rack to catch all the drippings, otherwise you'll have a heck of an oven to clean! 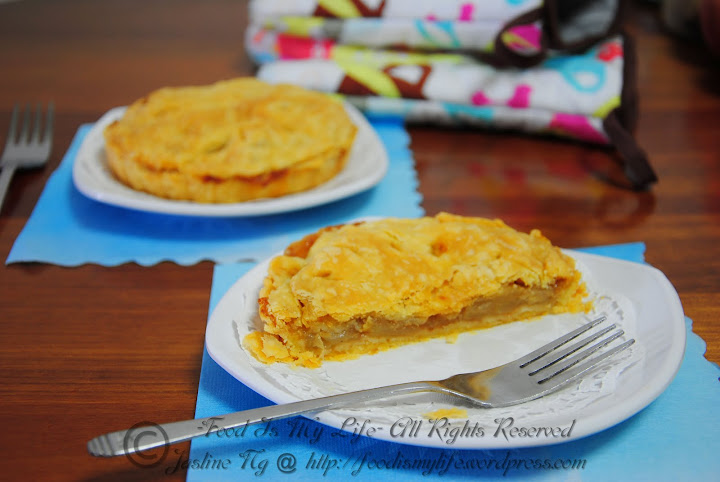 Let the pies cool on a wire rack. Serve warm or at room temperature, with or without some good quality vanilla ice cream / whipped cream.

And last but not least, I am submitting this to Aspiring Bakers #10: Easy as Pie (August 2011), hosted by Janine of Not the Kitchen Sink! 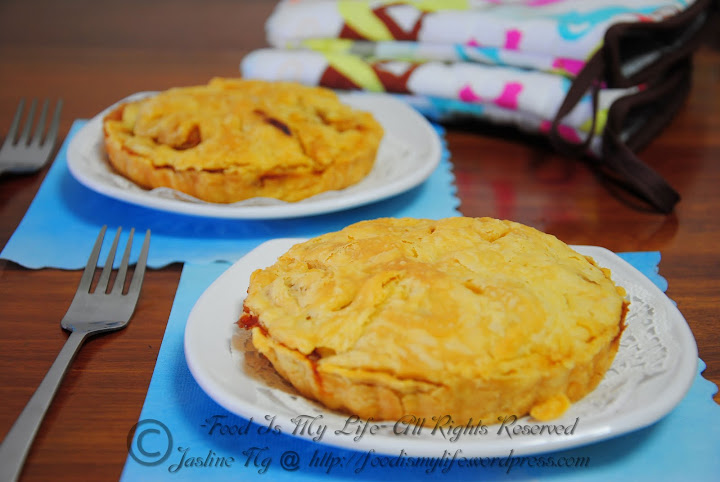 Divide the dough into 2 balls. Wrap each ball with plastic wrap and flatten it (either by hand or with a rolling pin) so it forms a flat disc that fills the corners of the plastic wrap. Chill the dough in the refrigerator for a minimum half an hour.

At this point, you can choose to finish making the pie another day. The dough can be kept in the refrigerator for up to 3 days or frozen for 3 months.

Making the filling:
Peel, core and slice the apple thinly. Add the lemon juice into a bowl of water and toss the apples inside. This is to prevent the apples from browning.

In a separate mixing bowl, combine the sugar, cinnamon, salt, nutmeg (if using) and flour together. Drain the apples well and toss the apples into the sugar mixture. Mix well and set aside.

Rolling out the dough and lining the pie dish:Remove one dough disc from the fridge (if the dough has been chilled for a long time, soften it lightly by letting it rest at the room temperature for a couple of minutes before it's soft enough to work with).

9-inch pie dish
Roll the rolled out dough onto the rolling pin and position it over the pie dish. Unroll the dough and carefully press the dough into the pie dish using your knuckles (not fingernails!) If any cracks appear during the transfer, patch it up by pushing the seams back together with lightly floured fingers.

4.5-inch pie dish
Use a 6-inch cutter (or bigger, depending on how tall your pie dish is) and cut out rounds, transfer the cut dough into the pie dish and press it in using your knuckles.

Roll out the second dough disc (also ⅛-inch thick) and set aside.

Assembly, baking and serving:
Preheat the oven to 220 degrees Celsius.

Put the top crust on the pie, pressing down the edges to seal the pie. You can crimp the edges for a decorative effect (purely optional). Make 6 - 8 slits in the top crust to allow the steam to escape during baking.

Place the pies in the centre rack. Place a baking sheet on the lower rack to catch all the apple sauce drippings.

9-inch pieBake for 10 minutes at 220 degrees Celsius. Lower the temperature to 175 degrees Celsius and continue to bake for 35 - 40 minutes, until the crust is golden brown and the juice is bubbling.

4.5-inch pie
Bake for 10 minutes at 220 degrees Celsius. Lower the temperature to 175 degrees Celsius and continue to bake for 25 - 30 minutes, until the crust is golden brown and the juice is bubbling.

Transfer the pies to a wire rack and cool for 1 hour.

Serve warm or at room temperature. 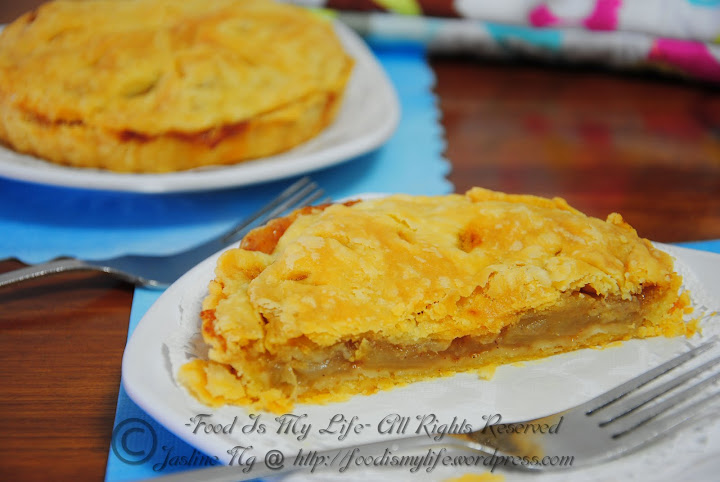