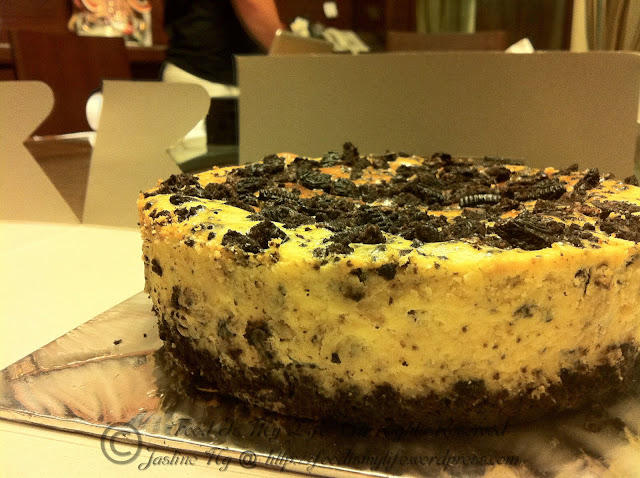 I have officially graduated and am now starting on my full-time job! It's kind of scary, thinking about it, but so far so good! But of course, being on a full-time job, I'll have less time to bake/cook... and blog... but luckily there's 2 public holidays this month, hopefully I'll be able to squeeze some time into baking something! (: And of course... I still have tons of Europe stuff to upload, will start working on it soon XD

I baked a cheesecake last week because cream cheese was on sale! And as requested by my buddies, I baked an Oreo Cheesecake.

I thought I have failed during the baking process because the top of the cheesecake browned and there was a huge ugly crack in the middle. ): But thankfully, the cheesecake remained wonderfully rich, creamy and Oreo-y (whatever that means!) And the crack wasn't very visible because the cheesecake sank slightly and the top was covered with Oreos. 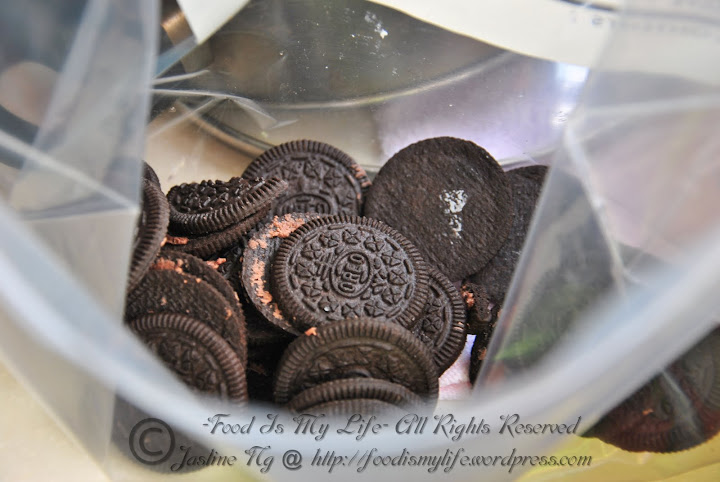 Start off with many Oreos - I removed the cream... you can leave it on if you want. (: 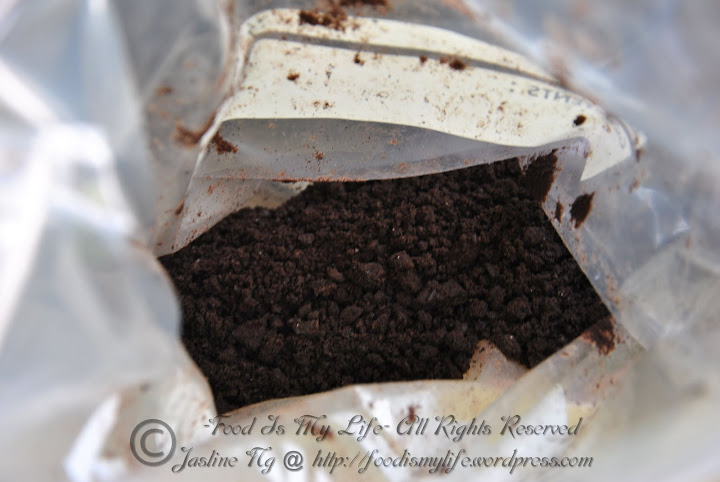 1) Use a food processor to crush them to smithereens.

2) Put them in a ziploc bag and bash them away using a rolling pin.

Your choice, but of course it's always more satisfying using method 2... (; 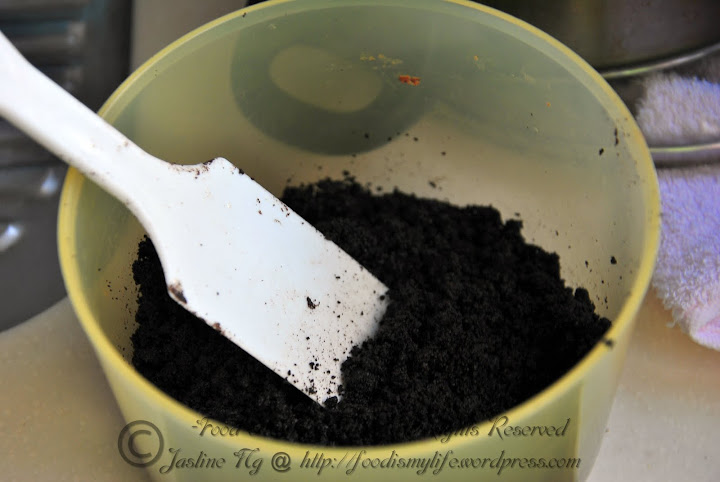 Mix in the melted butter and press the mixture into a springform pan. 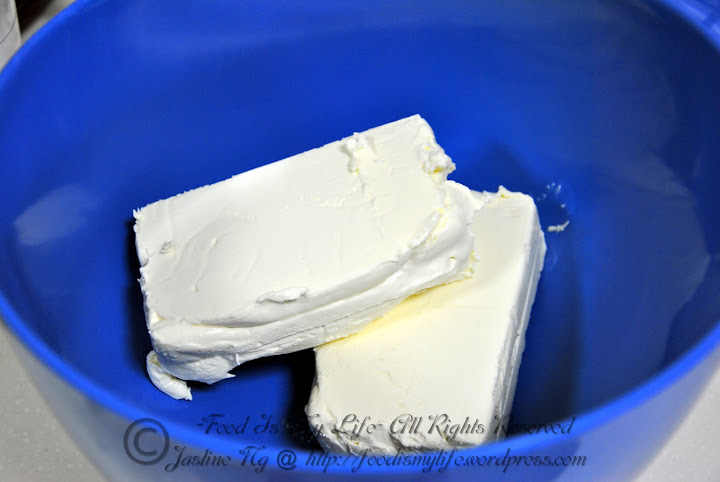 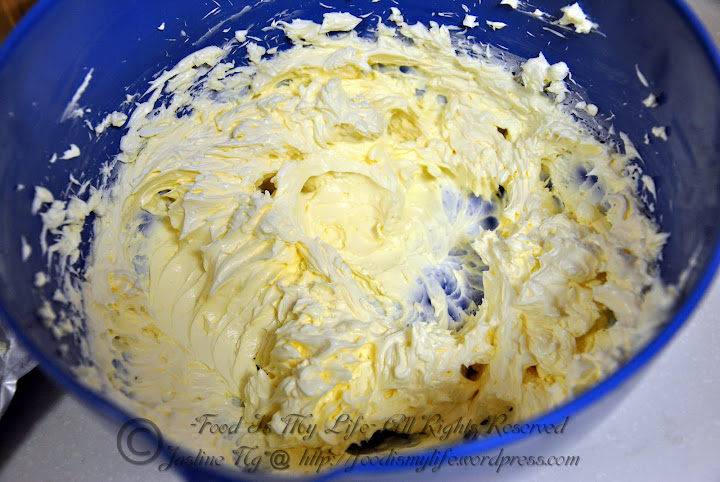 Beat them for a while until creamy. 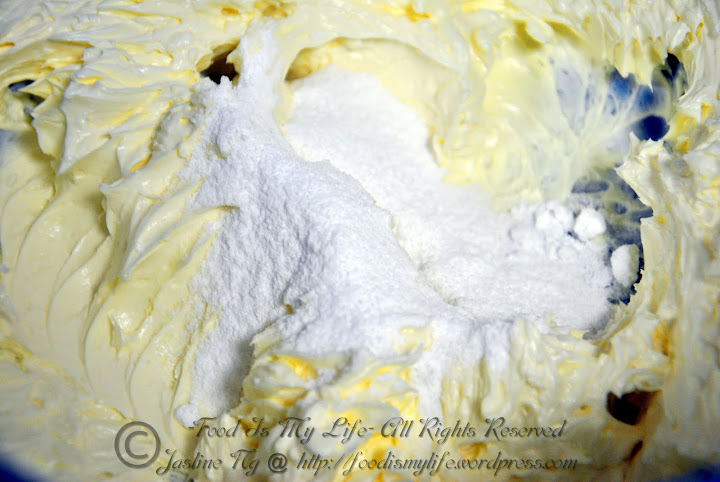 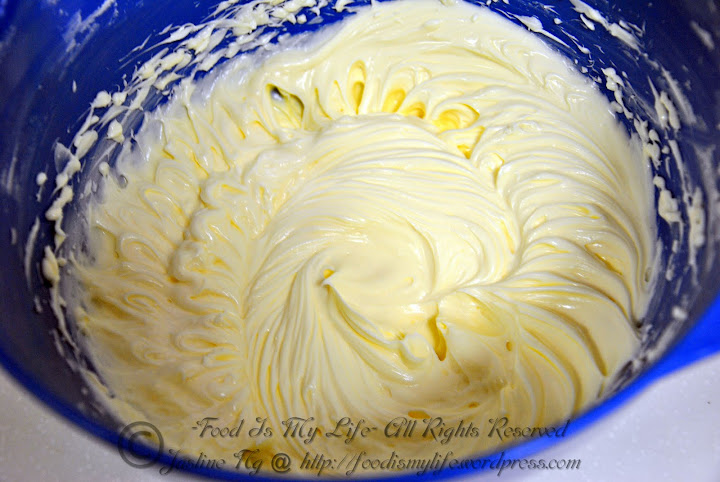 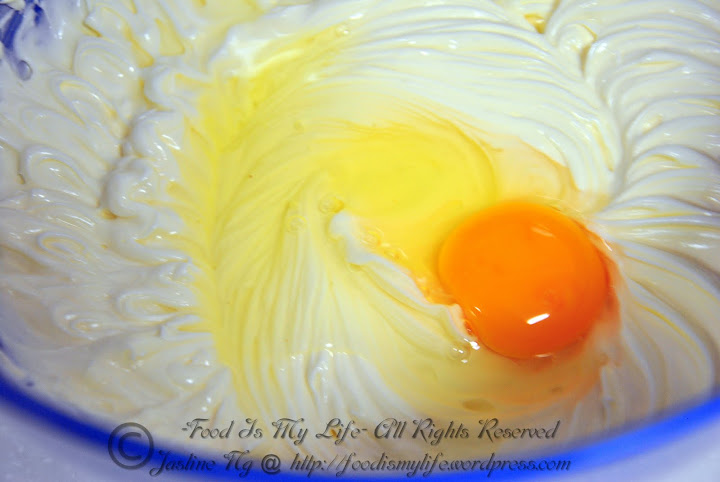 And the eggs go in, one-by-one. 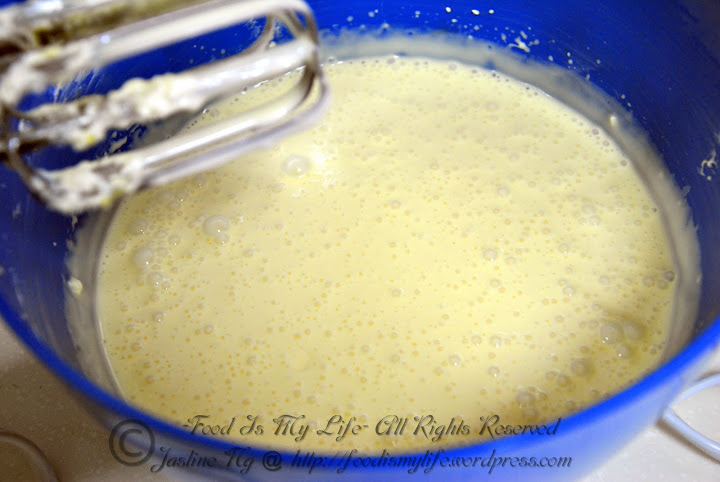 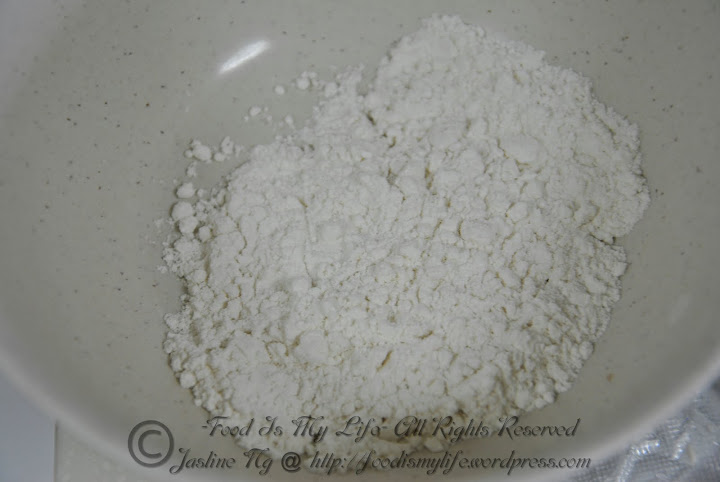 And in goes the flour and salt - it's the first time I've seen a cheesecake recipe using flour... I wonder what's the difference? 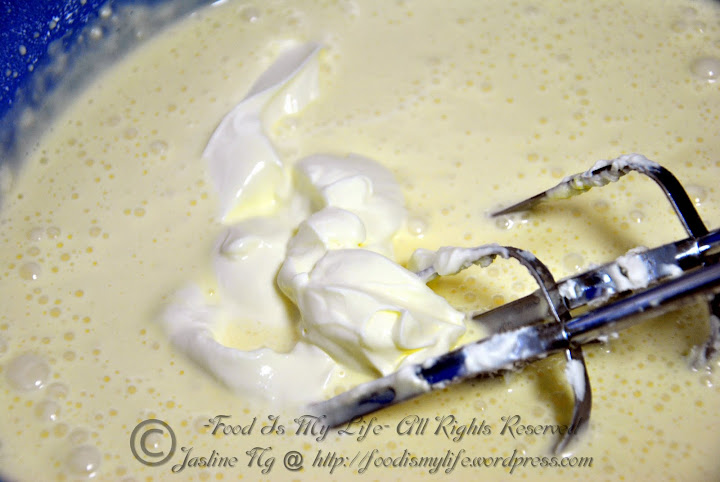 The sour cream goes in... 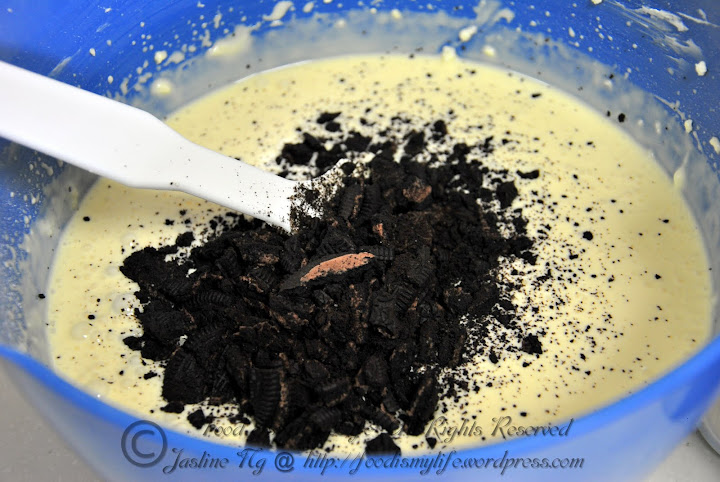 Last but definitely not the least - many Oreo goodness 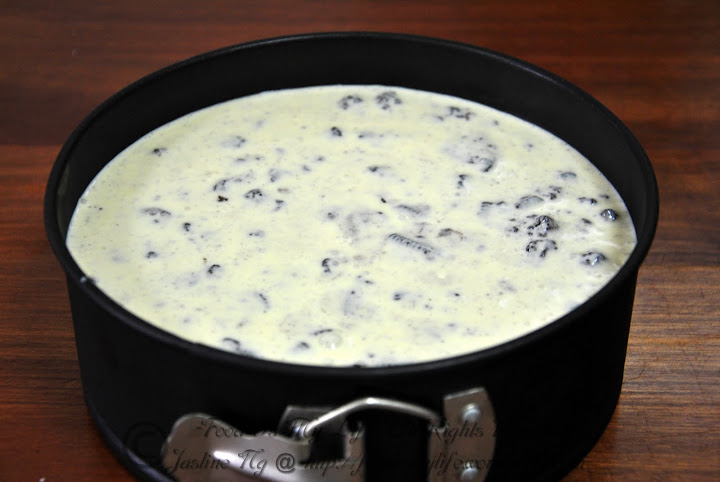 Transfer to the springform pan.

Wait, that's not all! 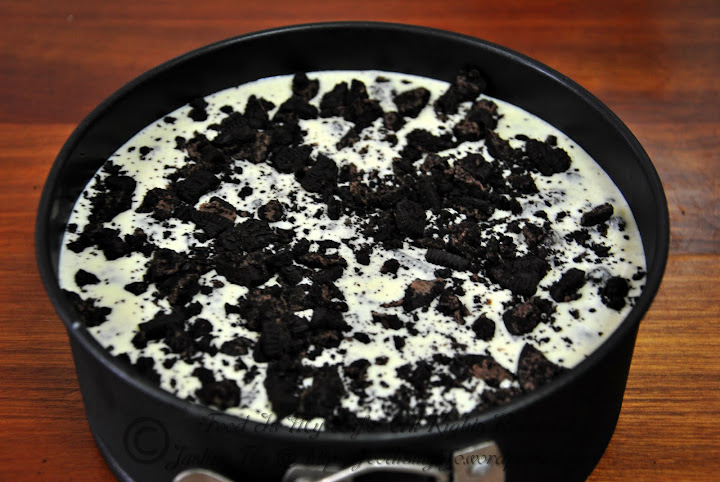 P.S. I'm gonna link this recipe to Sweets for a Saturday #29 hosted by http://sweet-as-sugar-cookies.blogspot.com. Do check it out! It links to so many other fabulous recipes! (:

Making the crust
Combine the finely crushed Oreo cookies with the melted butter in a bowl. Pour the mixture into a 7 or 8-inch round springform pan and press them onto the base and slightly up the sides of the pan with your fingers or the back of a spoon. Place in the freezer and prepare the batter.

Making the batter
Preheat the oven to 160 degrees Celsius.

Using an electric beater, set it on low speed and beat up the cream cheese for 1 minute until creamy. Add in the caster sugar gradually and continue beating on low speed until all the sugar has been incorporated and the mixture is light and fluffy.

Add one egg into the cream cheese mixture and beat using the electric beater on low speed until the egg is fully incorporated. Scrape down the sides and repeat with the remaining eggs, one at a time. Add in the vanilla if using and mix it in.

With the electric beater on low speed, add in the salt and flour and beat until just mixed in. Add in the sour cream and beat it in.

Stir in ⅔ of the Oreo chunks with a rubber spatula and transfer the batter into the springform pan. Sprinkle the remaining ⅓ Oreo chunks all over the top, pressing them down gently into the batter.

Bake the cheesecake in the middle rack (place a tray below it to catch any drippings) for 1hour 15 minutes.

(Note: I baked my cheesecake for only 55 minutes because it seemed cooked to me, so I recommend checking the cheesecake at the 45-minute mark and then every 5~10 minutes)

The cheesecake should wobble and jiggle slightly when you gently shake the springform pan.

Some things to note! 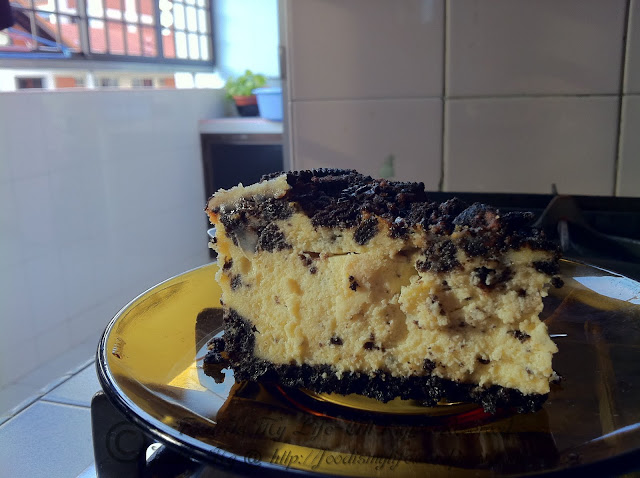