Bake-Along, just like its name suggests, is a twice-a-month bake-along session started by these lovely ladies: Joyce from Kitchen Flavours, Lena from Frozen Wings and Zoe from Bake for Happy Kids. I joined Bake-Along halfway and got to know so many other new bloggers. It was a lovely journey and I'm sure there'd be many more to come!

To commemorate Bake-Along's 1 year anniversary, the theme chosen is a Layered Cake - and boy I was so excited! After browsing my freezer and pantry and realized I still have some vanilla ice cream and plenty of Oreos left, I decided to bake an Ice Cream Cake - but in mini form for greater portion control.

I used two (three if you include the Oreo cookies) short-cuts while baking this cake - store-bought vanilla ice cream and Hershey's chocolate sauce. I would probably use my own chocolate glaze the next time (it's richer and more sinfully tasty), but that'll be for another time. The cake base is my trusty chocolate genoise - it's the perfect cake base because it is uber chocolatey (made with Varlhona cocoa powder) and it has a really soft texture so even when served straight from the freezer, the genoise is not tough and will not knock anyone's teeth off.

I brushed the genoise with a rum-flavoured sugar syrup - giving the cake an alcoholic boost and a more adult feel (but feel free to use a plain sugar syrup if you're going to serve it to kids). The syrup is necessary so as to prevent the genoise from drying out. For the ice cream portion, I mix the vanilla ice cream with plenty of crushed Oreos ice cream and some chocolate sauce. Start off with chocolate genoise - I'm showing a photo of the baked one because I've already featured the step-by-step for it in another post. Brush with a little syrup. Place the rounds into ramekins. Bash them with a rolling pin - an excellent exercise for relieving stress. You can use chocolate ice cream or any other flavours! Dump in the crushed Oreos. I decided to add in some chocolate sauce for some kick. Divide the ice cream among the ramekins. Top with another cake round and freeze for at least four hours. 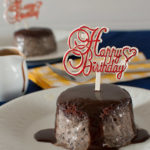