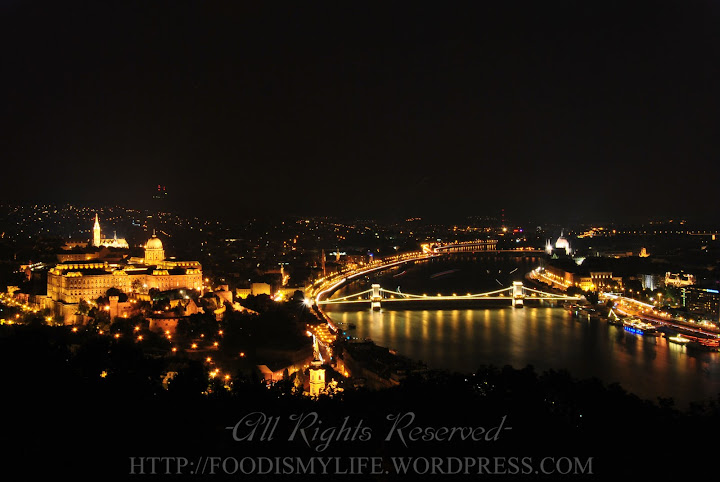 Leaving Venice behind, we hopped onto an overnight train to Budapest, Hungary!

Budapest is the capital of Hungary, and is the fusion of three towns - Buda, Óbuda and Pest. Budapest is generally divided into two sections - the Buda side and the Pest side - with Danube river dividing them. The Buda side is where the main history of the capital can be found - the Buda Castle and the Royal Palace. On the other hand, the Pest side is the city's financial district with many high-end shops popular bars.

Being a very greedy and always-hungry person, our first stop in Budapest was the Great Market Hall, also known as Central Market Hall, situated on the Pest end of the Liberty Bridge. 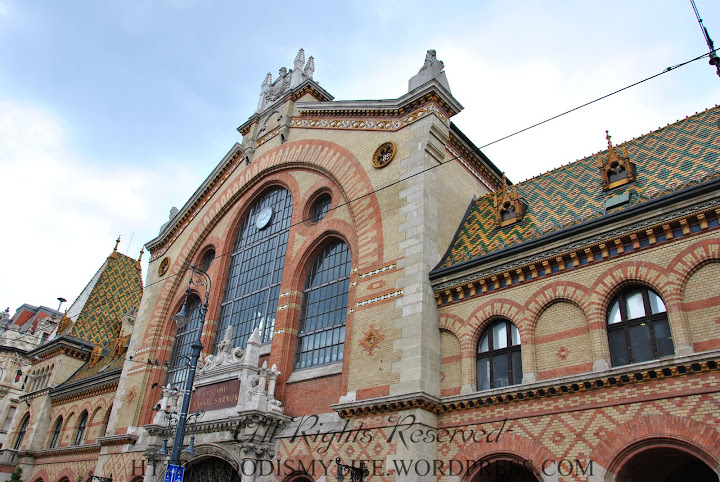 Great Market Hall is Budapest's largest indoor market and first opened in 1897. The 150 meter long neo-Gothic hall was damaged during World War II and underwent a reconstruction after the war. However, the contractors took short cuts while rebuilding market, hence it was closed again in 1991 as the whole building threatened to collapse.

Finally, the city government restored this building in the mid-1990s and it is now a popular destination for the city's residents as well as tourists. 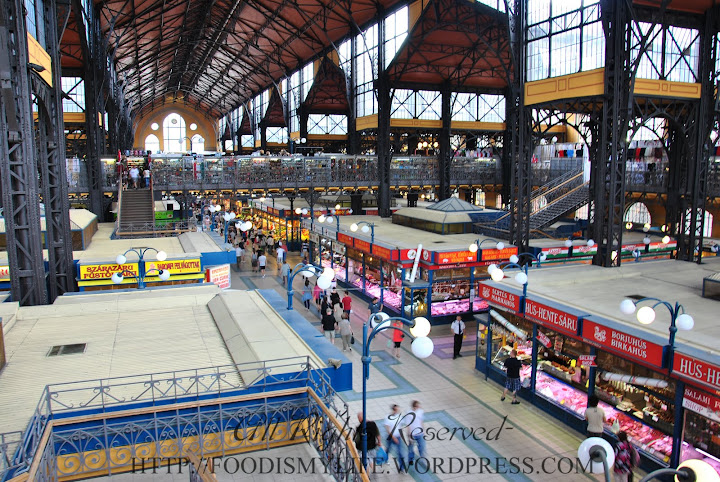 Interior of the Great Market Hall

The market hall has two levels and a basement. The ground level consists of all the fruit and vegetable vendors, fishmongers and butchers. On the upper level, there are many shops selling Hungarian arts and crafts as well as some fast food stands. 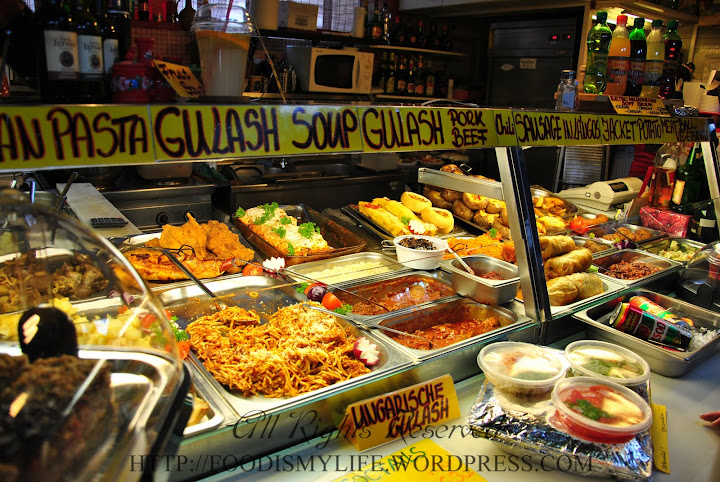 A wide variety of food was being sold at the fast food stands on the second level. Most of them were pre-cooked and the vendor will heat the food up for you in the microwave. A quick fix, definitely, but not very tasty... haha. 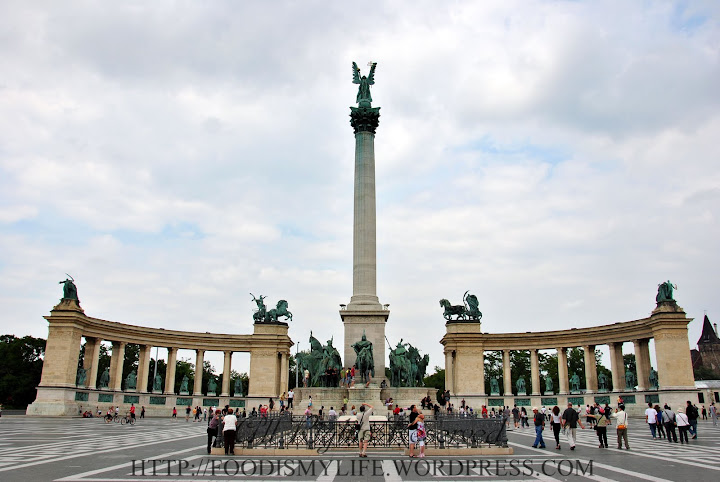 After grabbing a quick bite, we headed to Hero's Square, one of the most visited sights in Budapest. Located in front of the City Park, it is a World Heritage site built in 1896. In the middle, a statue of Archangel Gabriel stand on top of a 36 meter tall column, which is the symbol of the Roman Catholic religion. Statues of kings, governors and famous characters in Hungarian history were erected in the square and the statues on top represented War and Peace, Work and Welfare, Knowledge and Glory. 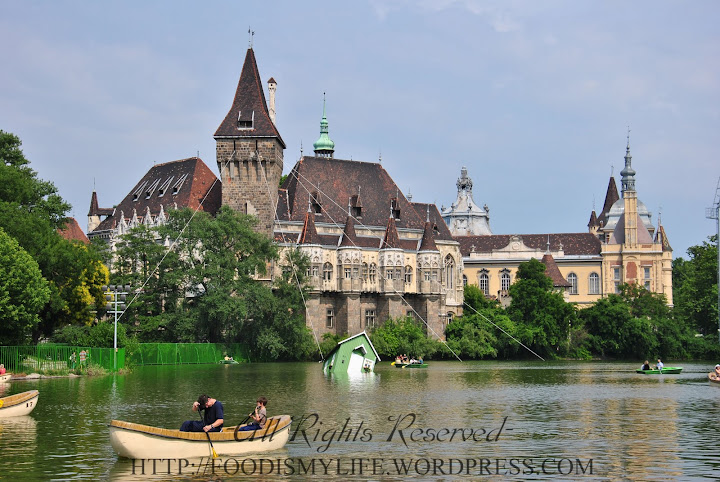 The City Park is a popular gathering place for both locals and tourists. Boat rowing is definitely a favourite activity for friends, couples and families. In the winter, the whole pond will freeze and become the largest outdoor skating rink in Central Europe! 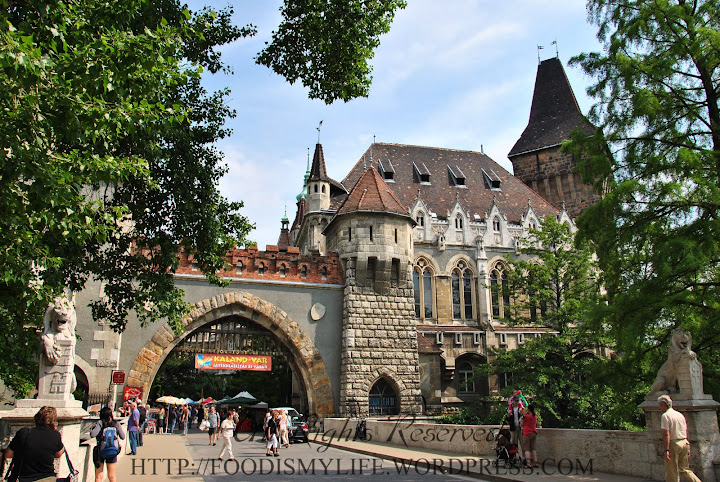 This Castle was originally built of cardboard and wood in honor of the millenium, but it was rebuilt in brick due to its overwhelming popularity. 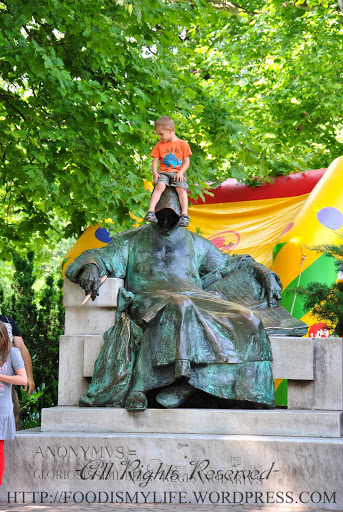 The most famous sculpture in the City Park is the statue of Anonymus. Sculpted in 1903, nobody know much about this mysterious monk who lived in the 12th century. Did you see the stylus he's holding in his right hand? Touching it is supposed to bring good luck to your studies (; 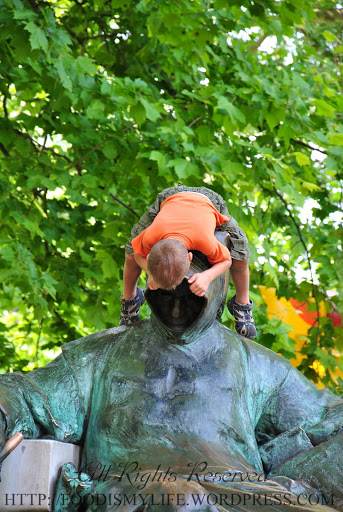 I guess the little boy just wants to know how he looks like... (: 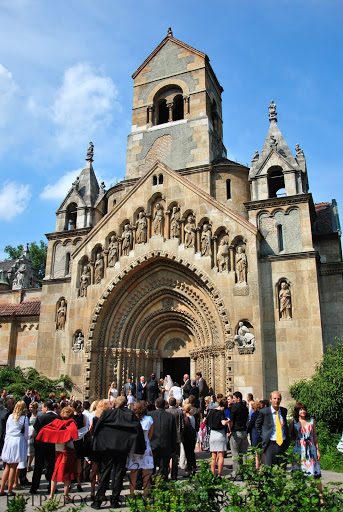 There was a church near the Castle and we were lucky to witness a wedding. 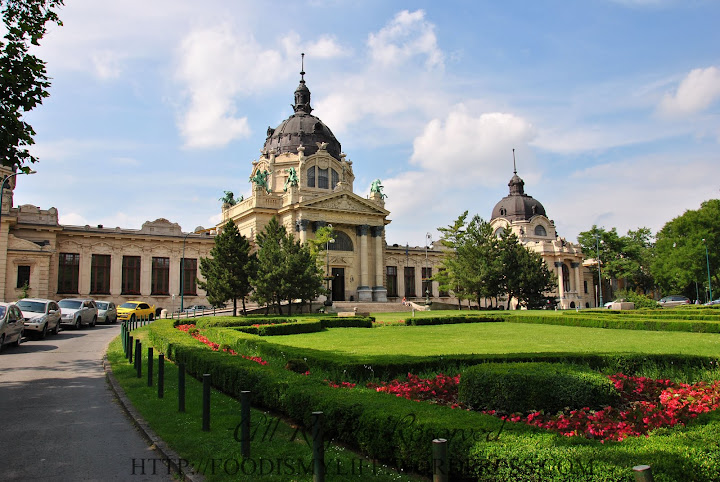 This magnificent building houses the largest medicinal bath in Europe. Built in 1913, the bath's water is supplied by two hot springs and it is popular because of its medicinal properties in the waters. 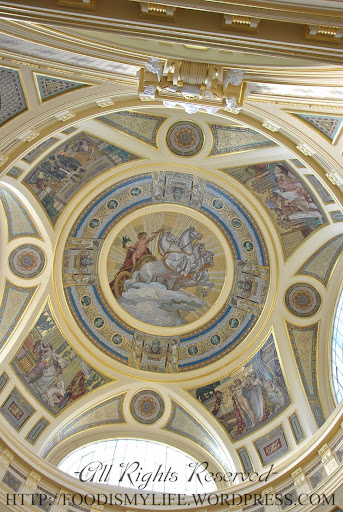 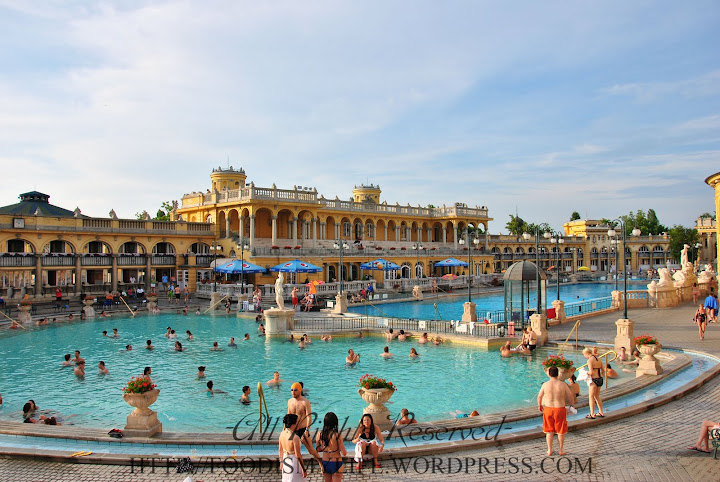 Look at how big the outdoor swimming pools are! 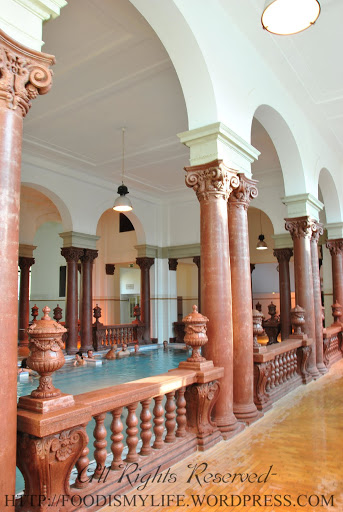 One of the indoor medicinal hot baths

Inside there are several medicinal hot baths. Each hot bath will state the temperature of the water, ranging from 28 - 36 degrees Celsius. Pretty darn hot! There are also saunas of varying temperature, it was really fun hopping from one bath to another. 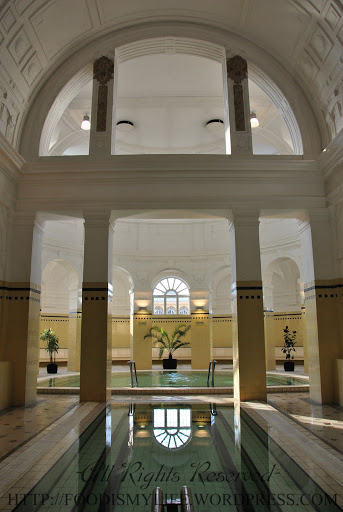 Another indoor thermal bath (there's nobody because the bath was closed at that time, only the outdoor pools remained open for use) 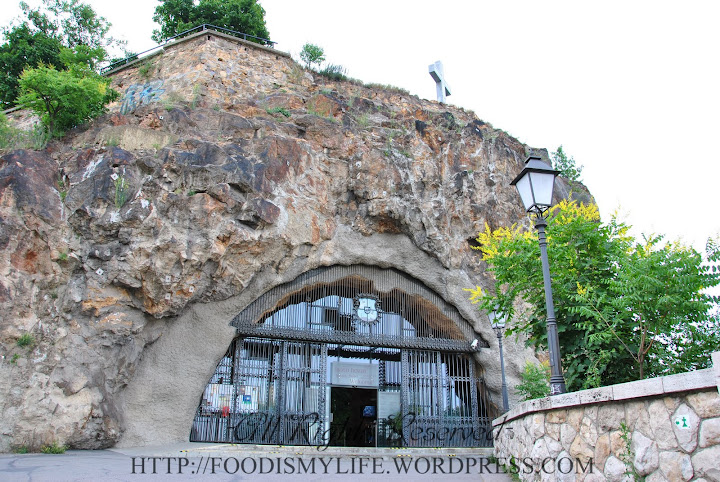 The next place we visited was the Cave Church. Located on Gellért Hill, it was originally a cave where Saint Istvan used to live in. The cave was expanded in 1926 and became a church since then. 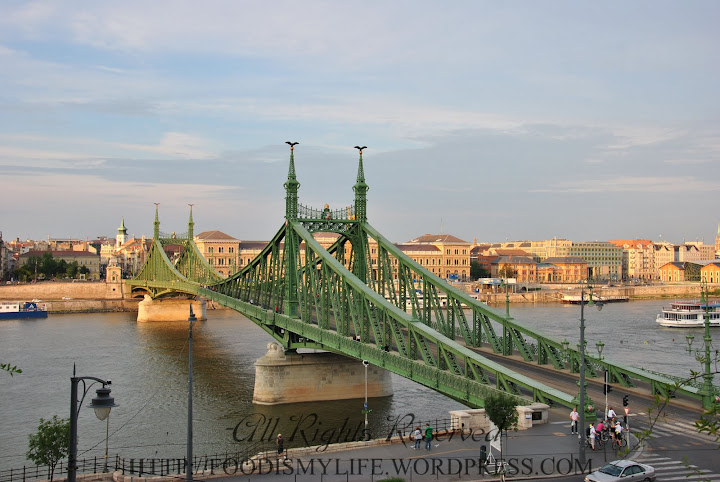 From the Gellért Hill, we were awarded with the view of one of the beautiful bridges that connects the Buda and the Pest across the Danube River. 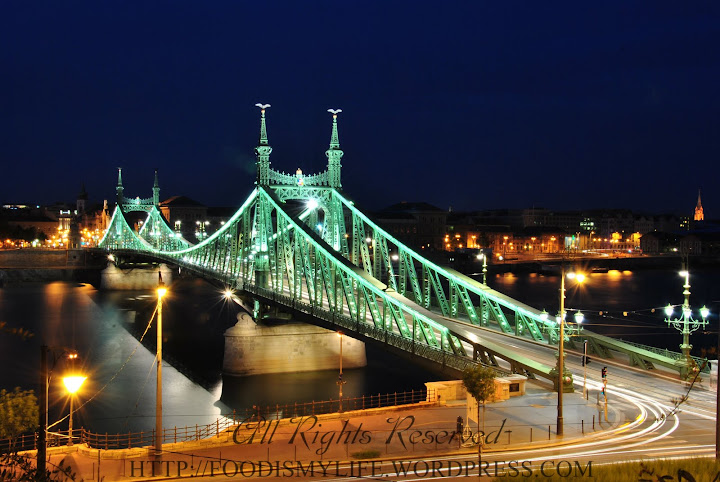 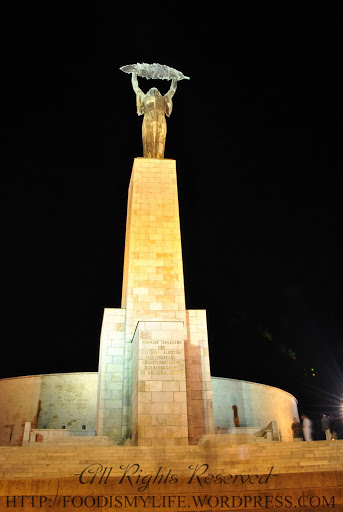 After dinner we climbed up the Gellért Hill (it was a long, long climb!) - about 140 meters rising above the Danube. On top of the hill is this 14-meter tall Liberty Statue erected in 1947 to commemorate the liberation of Hungary from the Nazi forces by the Soviet during World War II. The inscription on the monument was modified and now read, "To the memory of all of those who sacrificed their lives for the independence, freedom, and success of Hungary." (taken from wiki)

Gonna end off the first part of Budapest with the night photos X had taken in the night (because I'm quite lazy right now... :p) 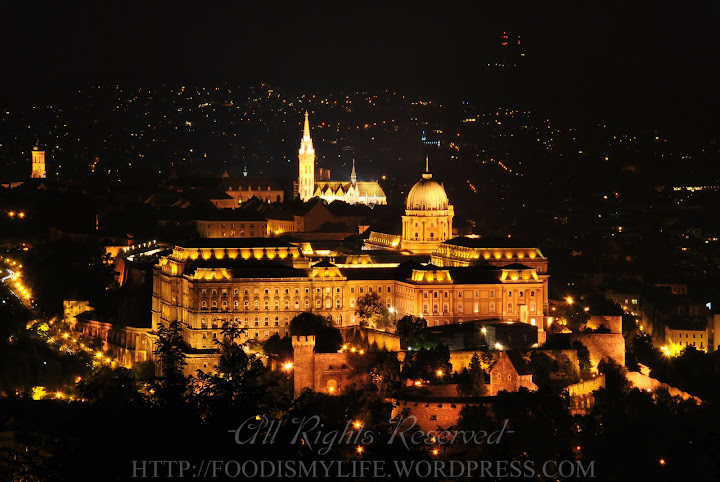 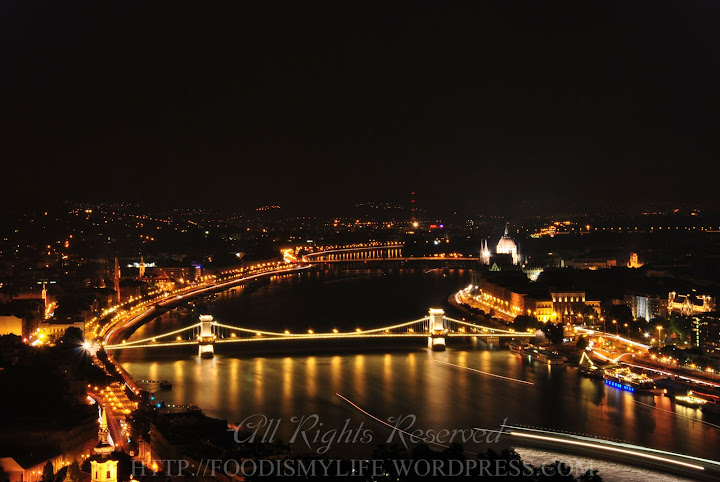