(I'm pretty tired when I typed this... so this will be a short post, and please forgive me if there's a typo or I'm not making sense! d:)

I saw some fresh shiitake mushrooms on sale a week back and I decided to whip up some aglio olio with them.

It's my first time using fresh shiitake mushrooms, but the results turn out really nice and tasty. 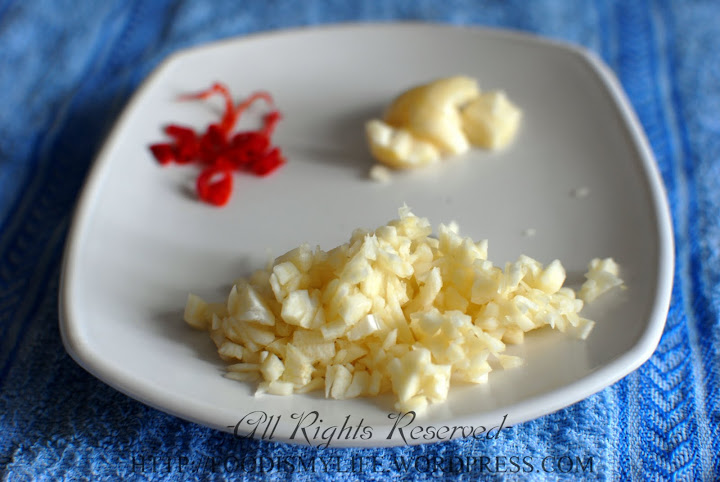 I will cook the mushrooms first before I make the aglio olio, so I smash a clove of garlic for the mushrooms to infuse in the garlic-loveliness.

Since I'm making pasta for two people, I diced 3 huge cloves of garlic nice and fine. Some people like the garlic to be sliced, but not me. I like them diced, and it's just gives me a weird soothing sensation just chopping the garlic up. Heh.

And I de-seeded and sliced up a chili padi for extra kick. X and I don't really take chili very well, so I'm just using one chili padi with seeds removed for both of us. If you're a chili fan, add in the seeds or add in more chili! 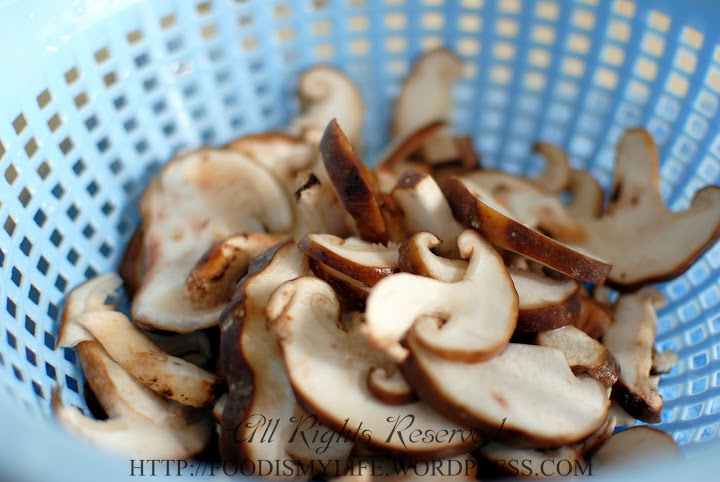 And then you'll need some fresh mushrooms. Don't even think about using those canned ones. Canned ones are good for soups and stuff, but not for aglio olio.

Fresh is the way to go. 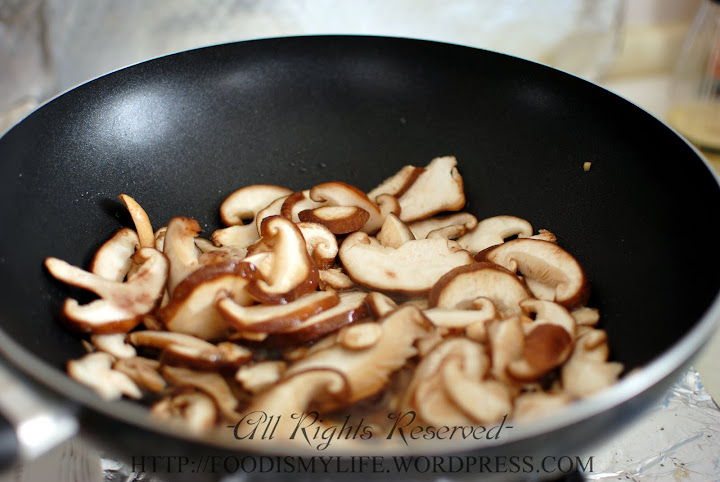 Heat up some olive oil in a deep non-stick pan. Add in the garlic, then dump in the mushrooms.

It seems a lot of mushrooms, but don't be fooled! 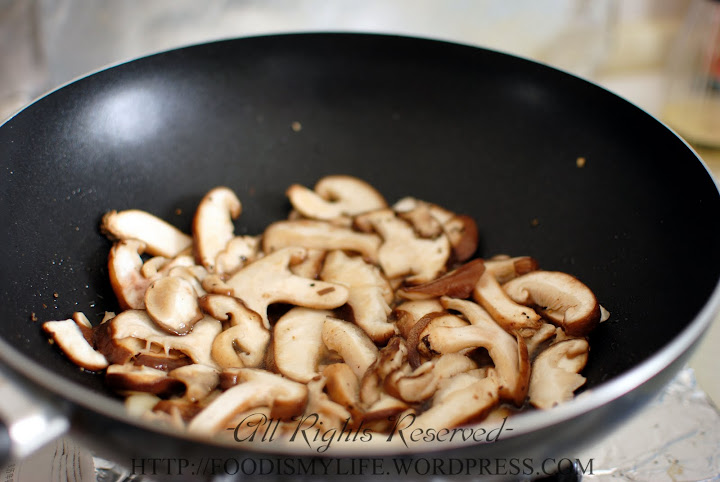 The mushrooms will shrink... 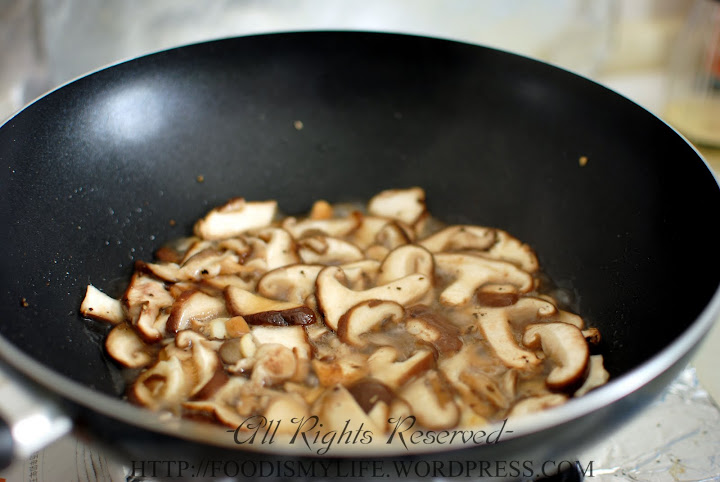 And shrink even more! Cook until the water released from the mushrooms has evaporated.

Moist is what you want. Moist, but not wet. 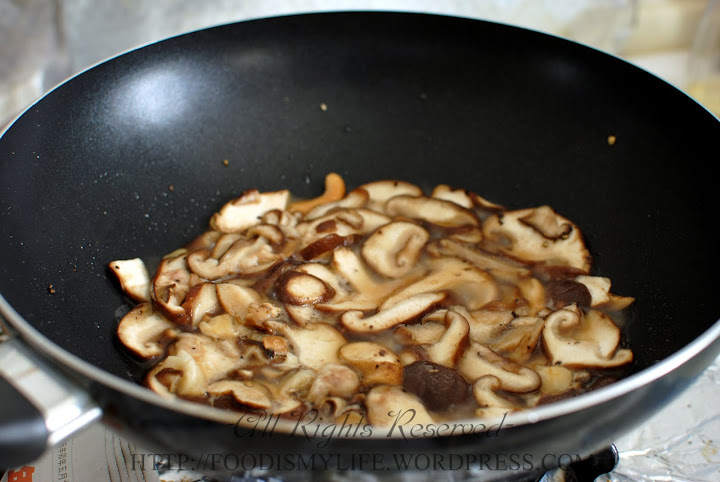 And they will really, really reduce in size. So a rough gauge is about... 60 - 80 grams per person? Depends on how much you like mushrooms (: 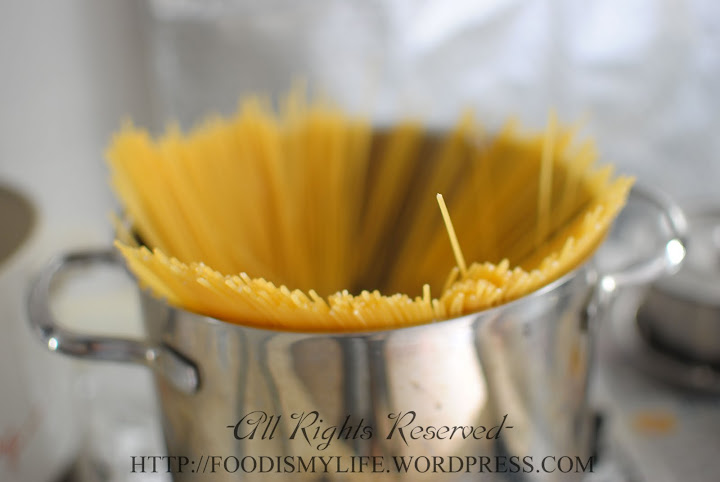 By now, your pot of water should be boiling. Add in the spaghetti! Season with salt generously to flavour the noodles and drizzle in some oil to prevent the spaghetti from sticking. 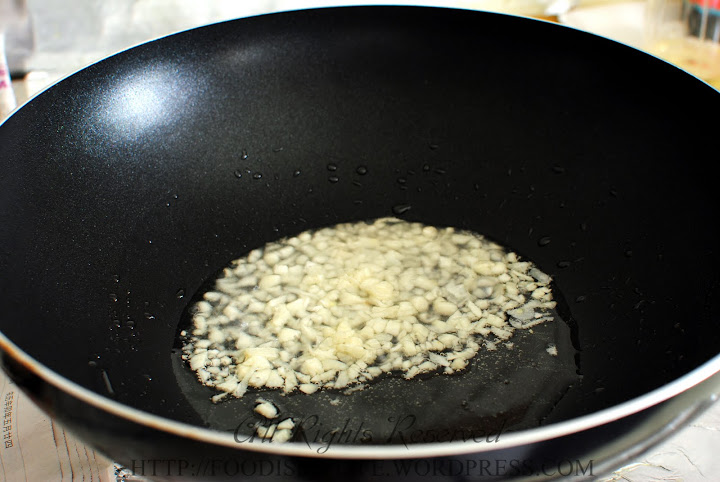 Transfer the mushrooms into a plate. Clean the pan (wipe with paper towel) and add in a lot, a lot of olive oil. Throw in the garlic and cook on low heat, stirring frequently. Cooking on high heat will burn the garlic before it has a chance to release its flavour! 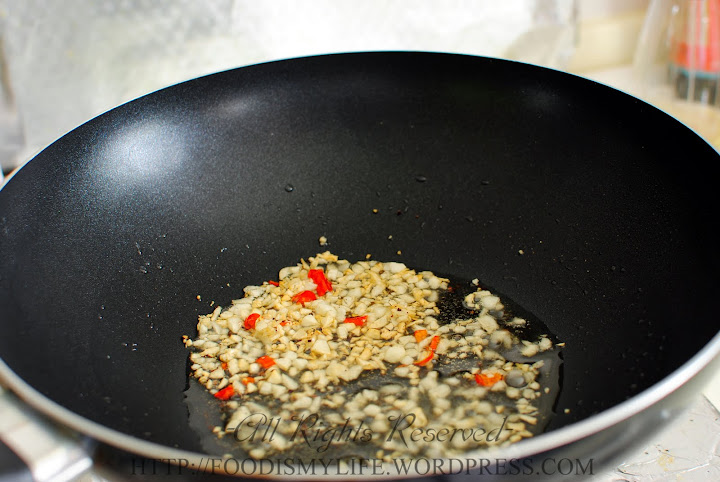 When the garlic is starting to turn golden brown, add in the chili padi and add in ground black pepper.

The next step will happen in a blink of an eye: Drain the pasta; dump the pasta into the pan; stir to coat the pasta; drizzle in some pasta water if it's a bit too dry.

Okay... so maybe that happened in many blinks of an eye...

Anyway, add in the mushrooms and stir it all together or, if feeling a little fancy, pile the pasta onto a plate first before mounting it with the cooked mushrooms. Drizzle with a little extra virgin olive oil and serve with grated Parmesan cheese. 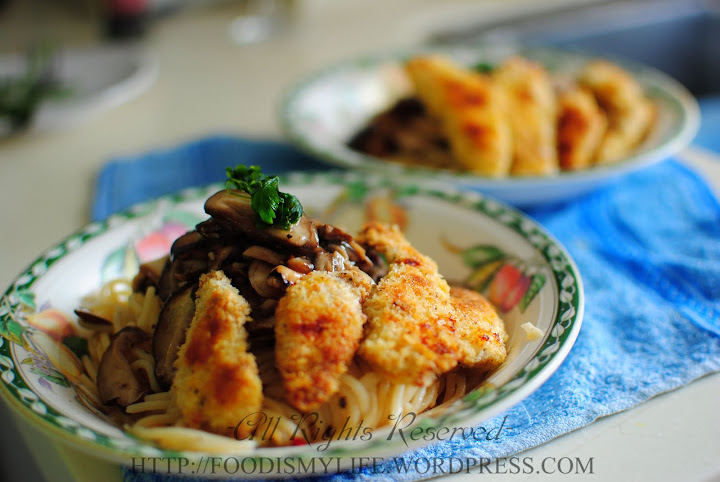 Because I'm a meat lover, I decided to make it even more yummy by serving with some baked chicken strips (the recipe is the same as baked chicken cutlets, just that I cut up the meat into small pieces before coating!) 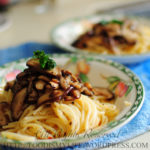