Char siew (aka cha siu, cha shao, char siu) is a type of BBQ pork dish in which long strips of boneless pork are marinated in a mixture of maltose, five spice powder, red fermented beancurd, dark soy sauce, hoisin sauce and lots of red food colouring. They are then skewered and grilled in a hot oven. The obscenely red meat is then sliced and served often with rice, noodles or in buns.

I've been wanting to make char siew for the longest time ever but kept procrastinating for I-cannot-remember-what-reasons. And just suddenly one day, after seeing the recipe on The Food Canon, I decided to give the recipe a go. Tried and tasted by many other foodies, this recipe not only looks good - it is also easy as well. Instead of using the oven approach, the pork is braised in a pot with all the seasonings - brown sugar, white pepper, honey, dark soy sauce, oyster sauce, five spice powder, a little wine and water - until tender. The pork is then pan-fried to obtain the slightly crisp and burnt exterior.

Recommended by the butcher, I chose to use pork butt, which is also known as pork collar, sometimes pork shoulder, and in Chinese, known as wu hua rou (五花肉). This part of the meat is found on the upper part of the of the pig's shoulder. It has a very pretty marbling of fats in and has a very nice ratio of meat:fat (about 3:2), so it's not excessively oily but still yields a very tender and melt-in-the-mouth texture. It is also the preferred part for making pulled pork. You can use pork belly if you want an even more fatty char siew, but it would have been too oily for me. I ended up with a pretty watery sauce, so I boiled it vigorously and reduced it by half, yielding a thick and syrupy sauce (perfect to drizzle on top and to go with rice!). I also pan-fry the pork in a separate non-stick pan with a little oil - it was an extremely smoky and sticky affair and I have an additional pan to wash, but because the pan was non-stick, it is a lot easier to clean. If you char the meat directly in the pot, you'll most likely end up with charred bits stuck all around the pot, which will be extremely hard to clean afterwards.

I originally wanted to serve the char siew with rice, but I was lazy so I ended up cooking a bag of instant noodles (would have opt for Chinese egg noodles but didn't have them on hand), dressed it in a little home-made sauce (recipe at the end) and then spooned char siew slices and blanched greens on top - a yummy char siew noodles dish is ready to be served! The char siew was really delicious and I foresee myself making it again - and probably using the home-cooked char siew to make char siew bao (BBQ pork bun) next time!

Only 2 step-by-step-photos today as the recipe's very straightforward and easy! Slice, drizzle with the sauce and serve! 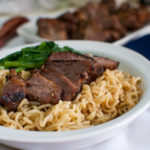 [1] Note that pork butt = pork collar = upper part of pork shoulder. This part of the meat has a nice marbling of fats, fatty but does not give an overly greasy after-taste. If you prefer fattier cut, use pork belly. If you want to be a bit more health-conscious, you can go for leaner cuts, but it will lack the juiciness and tenderness of the fatty cuts!

[2] I asked my butcher to cut the pork butt into long strips, so that it looks more like char siew.

[3] Traditionally char siew is red in colour, but not wanting to add artificial food colouring into my food, I decided to omit them. Since food colouring doesn't help in improving the flavours in any way, no harm to omit it!

[4] If you don't have Chinese wine, you can use sherry instead!

[5] After marinating the pork, you can sear it first with a little oil, before adding in all the marinade and simmer it. You can also use a non-stick pot to cook the pork so that you can char the pork directly in the pot later on.