Mid-Autumn Festival is coming! Having tried my hand at making snow skin mooncakes last year, I decided to try out more this year using new recipes and flavour combinations. I'm not a fan of snow skin mooncakes (still prefer my traditional baked ones with just plain red bean paste), but I love making them as the flavour-mix are endless!

To save time from shaping the bunnies and piggies this year, I bought a set of 50g moulds (4 stamps) and a set of 25g moulds (6 stamps) from eBay at USD 9.99 (about SGD 12.50). Not sure if they are cheaper than those sold in baking stores (I'd like to think so), but there are a lot more varieties to choose from on eBay. Do note that if you are buying from eBay, it will take about 3 weeks to be shipped here to Singapore!

Now for the mooncake components! There are 3 components in the mooncake: the skin, the filling and the truffle center at the ratio of 20:15:10 in grams for a 50-gram mooncake.

The truffle center is made simply by mixing a little salt, cream and Baileys into melted chocolate. The truffle mix is then chilled then divided into 10-gram pieces. I used Margaret River's dark chocolate but any good-quality chocolate will do. You can use a mix of dark and semi-sweet or even white chocolate to show off the colour contrast against the chocolate filling (but I won't do that because white chocolate will make the overall mooncake sweeter).

The filling is made by mixing melted dark chocolate into the lotus paste and melon seeds are added for the crunch. I've read from Sherlyn's blog that by the paste is a bit dry with the addition of chocolate, so I also added a tablespoon of Baileys though the Baileys wasn't very noticeable. I didn't dare to add too much for fear that the paste will be too soft. I used a no-sugar lotus paste that I bought from Sunlik (a little more expensive than regular lotus paste), and I found the sweetness just right.

The snow skin is made by mixing cooked glutinous rice flour, icing sugar, cocoa powder, butter (in place of shortening), Baileys and ice cream soda together. I know I know - ice cream soda?! That was from a recipe I adapted from Aunty Yochana which many people have tried and vouched that the skin stay soft even after several days! I have made a batch of mooncakes with plain white lotus paste (follow me on Instagram @foodiebaker to see them!) and I purposely kept one to experiment and yes, even after 3 days, the skin is still quite soft! The recipe I used last last year hardened after 3 days in the fridge, so I'm glad I found a keeper!

Verdict? This was an absolutely chocolatey mooncake that so far everyone loved (except for those non-chocoholics)! The mooncakes have just the right amount of sweetness with a very slight hint of Baileys. I will try increasing the amount of Baileys the next time (which is most likely for next year's attempt... haha!)

Here are the step-by-step photos on the mooncake making! 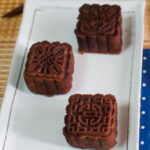