I love coconut - from the juice to the flesh to the dessicated ones to the cream! I also love coconut in curries (from red to green to yellow to laksa), in rice like nasi lemak, and in desserts like kuihs, chendol, ice cream and in cakes! However, I don't bake with them as they spoil very easily . But with Bake-Along coming up with a Coconut Checkerboard Brownies I can procrastinate no longer! I absolutely love the brownies base - intensely chocolatey and gooey. The coconut is a little too dry for my liking - I think the difference lies in the fact that the original recipe used fresh desiccated coconut (which is moister) while I used dried ones. Though it's not explicitly stated in the recipe that fresh coconut should be used, I think that's the main reason why the coconut portions are not moist enough. Nevertheless, the coconut smells extremely heavenly during baking and it's an interesting twist to the traditional brownie.

The checkerboard is definitely very lovely to look at, but it's a little time consuming (having to refrigerate and spoon them separately), and to be honest, after cutting the brownies up, it's hard to see the checkered pattern.

On to the step-by-step photos! Coconut in a food processor - process till its finely chopped. Weigh some softened cream cheese in a mixing bowl. Add in the chopped coconut... Measure some cream of coconut. Add in the cream of coconut. Mix it around and get one egg and a pinch of salt in. Mix, stir and mash the mixture - I think the mixture should be moister
than this, so do add a little more cream of coconut if you have the same consistency as mine! Combine some butter and chocolate in a heatproof bowl. Melt into a smooth consistency over a pot of simmering water (double boiler). Add in sugar and stir. It will be lumpy, but will turn out ok later on (like magic!) Let the mixture cool slightly. Whisk in one egg at a time until fully incorporated - I beat them in using my rubber spatula (really lazy to grab my whisk). Add in a teaspoon of vanilla extract / paste (I always estimate as I don't want to waste the paste on the measuring spoon!) Sift flour, baking powder and salt over the chocolate mixture and fold it in. Arrange the coconut balls on the cold brownie base. Fill the little "holes" with the cold leftover brownie. Press some coconut on top of the coconut balls (didn't do a good job adhering them and gave up halfway!) Bake until the brownie's cooked and the top is lightly golden brown! (Sorry for the blur photo!)

Do hop over to the lovely hosts - Joyce from Kitchen Flavours, Lena from Frozen Wings and Zoe from Bake for Happy Kids - websites for their bakes for this Bake-Along! And to see what other bloggers have baked, do click the little froggie below! 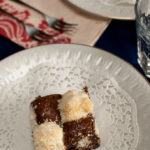 adapted from Bon Appétit Desserts: The Cookbook For All Things Sweet And Wonderful
Tried this recipe?Mention @foodiebaker or tag #foodiebaker!