When we moved overseas, I regretted not bringing a pack of gochugaru from Singapore with me. Gochugaru is a coarse ground red pepper made from sun-dried chile peppers. It can be used in many Korean dishes and is the key ingredient in most types of kimchi, a traditional fermented Korean side dish. I've been dying to make some kimchi-based recipes but couldn't do so because I cannot find kimchi here and I cannot make my own kimchi because of the lack of gochugaru.

I initially wanted to wait until I go back to Singapore (for holiday) to stock up on gochugaru but when I saw a pretty head of napa cabbage in the market a few weeks back (which is a rarity as well), I knew I couldn't wait any longer.

It seemed impossible to make kimchi without gochugaru, because so many websites have stated that there is no substitute to gochugaru. But then I happened to chance upon Lisa's Lemony Kitchen's recipe and saw that she used paprika and chili powder to make kimchi - and that's what I decided to do too. After all, paprika is made from dried chilli pepper as well and the colour closely resembles that of gochugaru, isn't it? There are many different types of paprika, the common ones I saw in supermarket are smoked, sweet and hot paprika, as well as paprika in oil and without. I chose hot paprika (without oil) as I felt that it will give the kimchi the spicy flavour I'm looking for.

I used Maangchi's Easy-to-Make Kimchi recipe, which involves chopping up the cabbage first instead of the traditional method which leaves the cabbage whole. One reason was because the only glass container I have to keep the kimchi in is a jar, so putting a whole cabbage inside will be pretty difficult. In addition, by chopping ahead, I save time later on when I make other recipes. The kimchi will taste quite spicy at the start, but after fermentation, the sour-ish taste will offset against the spiciness.

Does the kimchi taste authentic? I cannot say for sure as I've not eaten the real kimchi for a very long time. But I have to say that this is definitely an option for those staying in places with no access to Korean ingredients, and probably one that I will keep making until I lay my hands on some gochugaru!

And while I leave you with these photos, I'm off to make some kimchi pasta and budae jjigae! 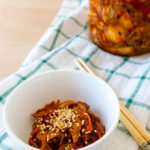