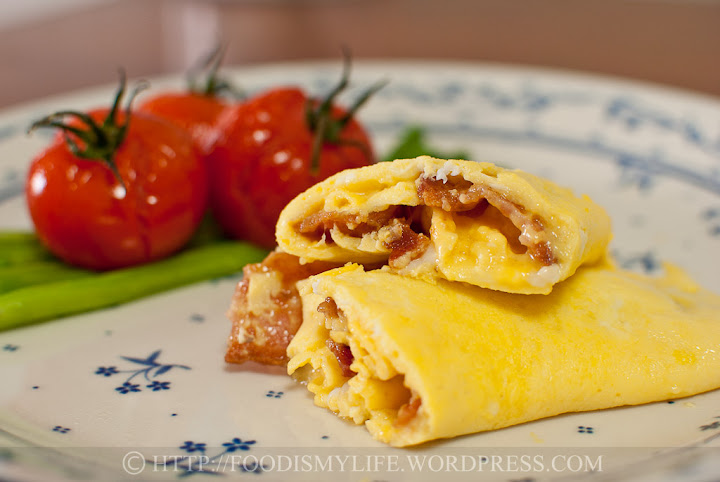 Zoe from Bake for Happy Kids organised a Blog Hop event called Cook Like a Star and I was so excited to join in the event. Events like this motivates me to try out new recipes, thanks Zoe!

The event this month is to cook like Donna Hay, an Australian food stylist, author and magazine editor. I've heard of her many times but unfortunately I've never gotten my hands on any of her recipes before... /: After browsing through Donna Hay's website, I settled on making a bacon omelette with roasted tomatoes - because just the name of the dish itself is mouth-watering! 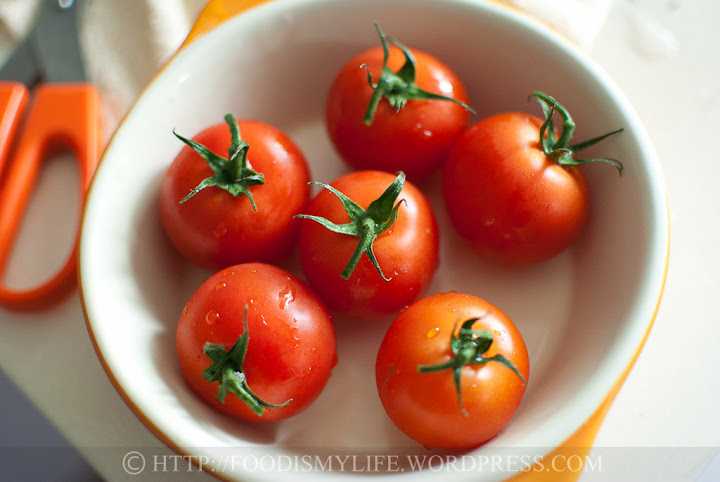 I've actually made this dish last week and it wasn't very successful. Previously I used hydroponically grown cherry tomatoes that cost SGD 2 for 250 grams - they were not juicy, bland and some of them have not even ripened! I remembered loving the tomatoes in Europe - fully ripened, sweet and juicy! (Though we didn't to eat a lot of them because of the E. coli breakout)

So I read somewhere online and found that hydroponically grown tomatoes do lack in flavour and vitamin C because they are often grown in greenhouses which inhibits access to sunlight and they have no way of obtaining flavour from the natural soil. Normal tomatoes (that are grown in soil) are often picked while they are still green and then exported out of the country. They are then exposed to ethylene gas to induce colour and ripening before being sold in supermarkets. Vine-tomatoes are tomatoes that are picked while still green together with their vine and left to ripen naturally, without any ethylene gas.

I'm unsure of how true this is, but I do know that any unripened fruits can be left in a bag with bananas because bananas release ethylene gas naturally, which helps induce ripening.

Oops I'm digressing - anyway, I was willing to spend on good quality tomatoes this time round, so I decided to splurge on this box of imported vine-on tomatoes - a whooping SGD 6.60 for 9 small tomatoes (about 1 to 1.5 inch in diameter). They were very pricey, but they turned out to be really delicious - they are so sweet and so, so juicy! (Not to mention they look extremely pretty!) I will definitely buy it again, just not on an everyday basis. 😉 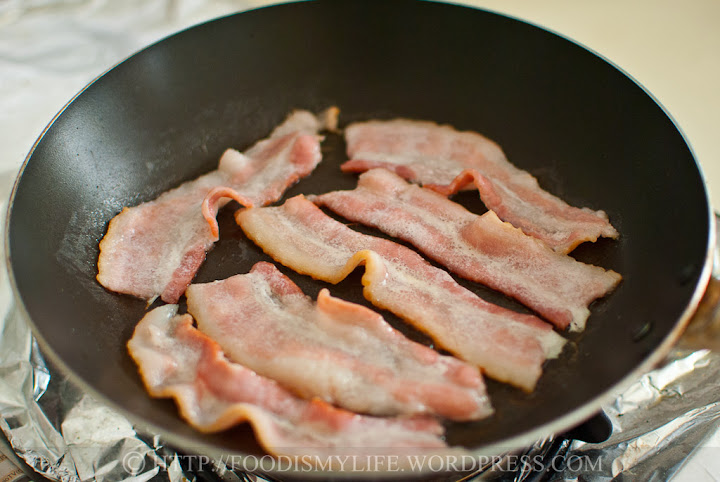 Frying the bacon - so irresistibly tasty!

I really love bacon - salty, smoky and crispy - but I try not to eat it so often because we all know how unhealthy it is! 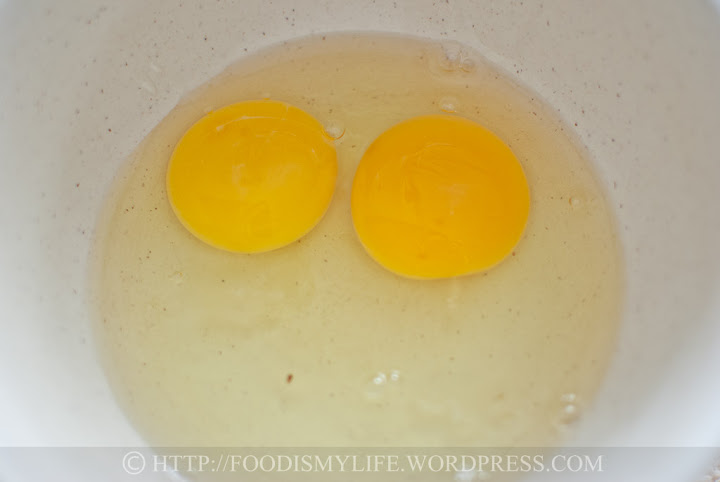 Two large eggs per person - too many eggs and it's gonna be hard to make a good omelette.

I'm using an 8-inch non-stick frying pan to make the omelette. The ideal number of eggs is 2 large ones (or 3 small ones) because if too many eggs are used, it's gonna be hard to cook the eggs evenly, and there's a tendency to overcook some part of the eggs and end up with rubbery / leathery omelettes which is plain yuck (I've made too many failed omelettes in the past - and I swear, it's really gross to eat a rubbery omelette) 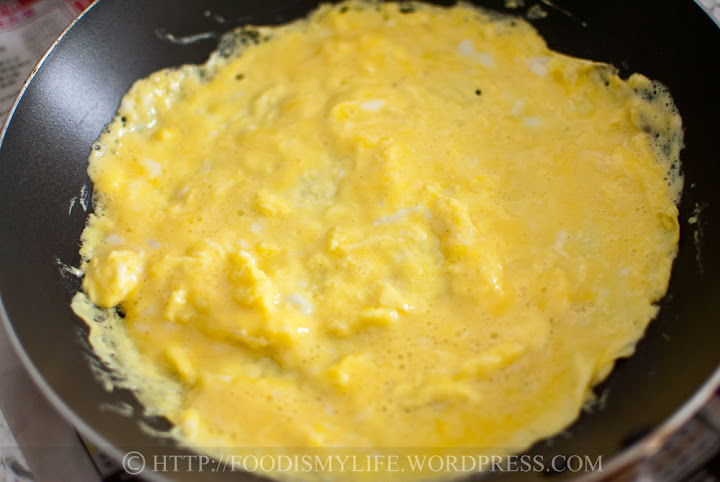 A perfect omelette to me must be folded, with the exterior still yellow and not browned, and the interior creamy and still soft - like almost-cooked scrambled eggs. I learnt some of the tips in making omelettes from one of my favourite chefs - Jamie Oliver - and below's a video of him teaching how to make scrambled eggs. 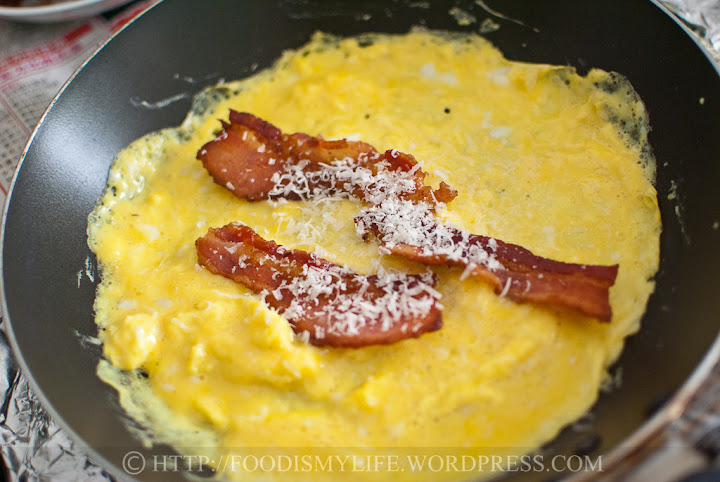 Getting the bacon and Parmesan cheese onto the omelette. 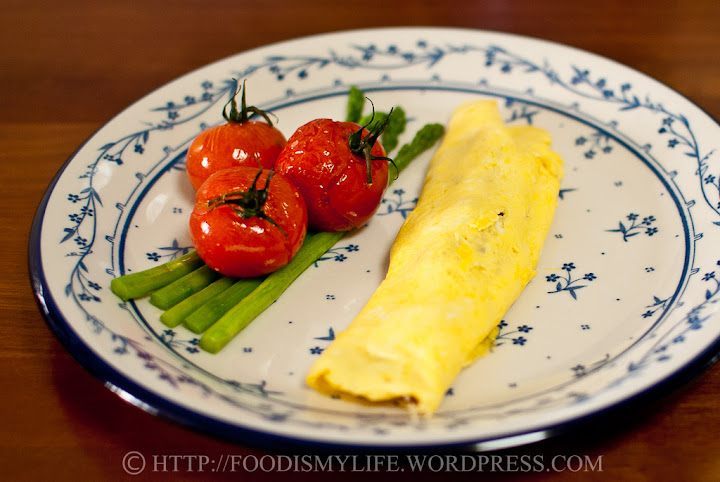 Served with some blanched asparagus and roasted tomatoes and I am a happy girl. 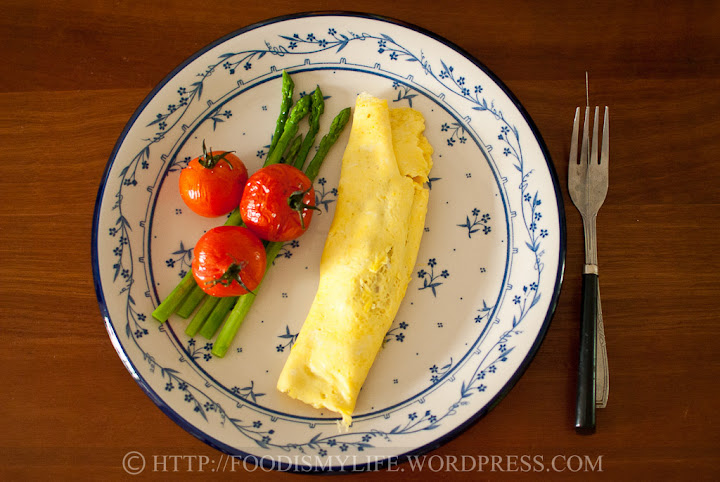 P.S. Do join in the bloghop here! 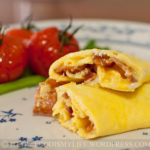 [1] The ideal number of eggs per omelette is 2 to 3, depending on the size of the frying pan. Cook only one omelette at a time - omelette cooks very fast and you have no time to be distracted! Don't be greedy and cook too many eggs at once as well, as it will be difficult to cook the eggs evenly and there's a high probability you'll overcook the eggs and resulting in a yucky, leathery omelette.

[2] The frying pan needs to be hot enough such that the eggs will sizzle gently once they go into the pan. A good non-stick pan will make life much easier to make a successful omelette.

[3] Variations: Season the eggs with herbs; swap out the Parmesan cheese with Cheddar; serve with fresh salad etc - the variations' endless!