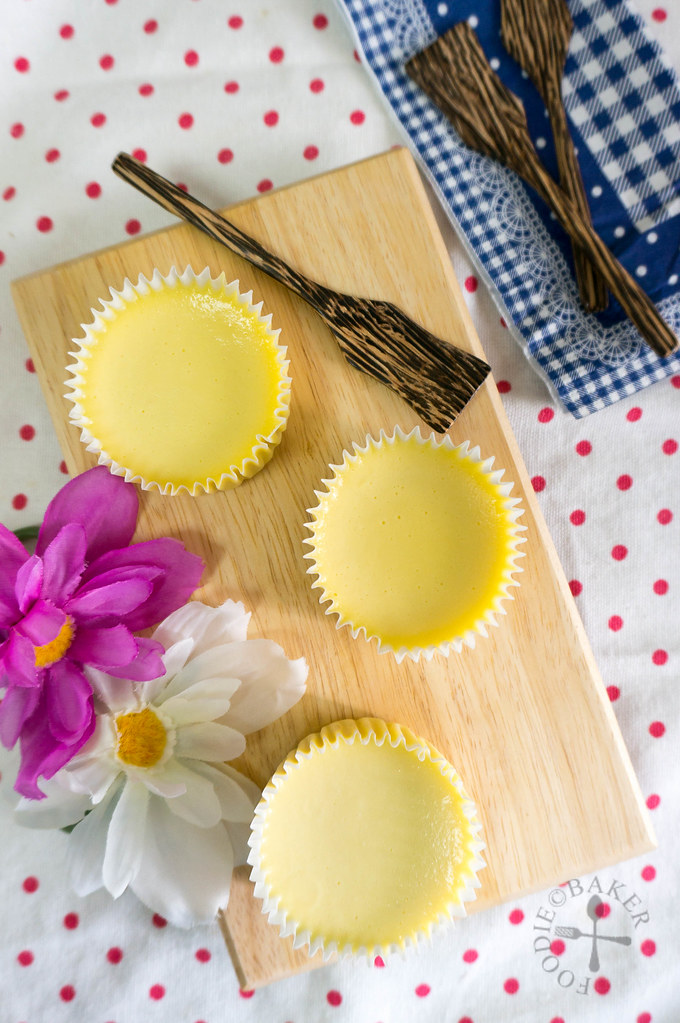 Hello, how have you been? Pardon the almost 2-month absence from the blogosphere! I was revamping the whole website, including shifting the blog back to WordPress. This whole process took a bit longer than I expected, but I really like the new layout (and I hope you like it too!) There are still a few minor details I would like to tweak (like the recipe page) but those can wait, because I have so many backlogged recipes to blog about! 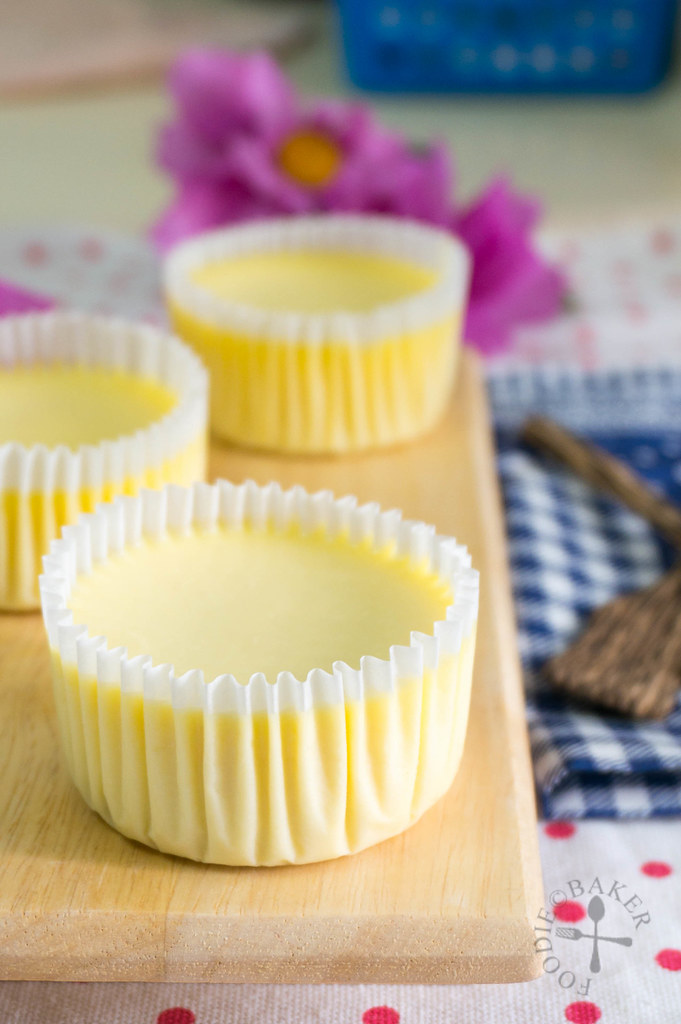 Recently I instagrammed a photo of a durian cheesecake and as promised - my comeback recipe! I've never really wanted to bake or cook with durians because I've always loved them pure and original. The only exception were the Crispy Durian Rolls I made last year. But since I got a packet of Mao Shan Wang durian puree a few months back during the durian season (they are kept frozen) - and each kilo cost only S$13! - I decided to bake something with it. If you love durians, you are in for a treat! This currently ranks Number 1 in my cheesecakes list! 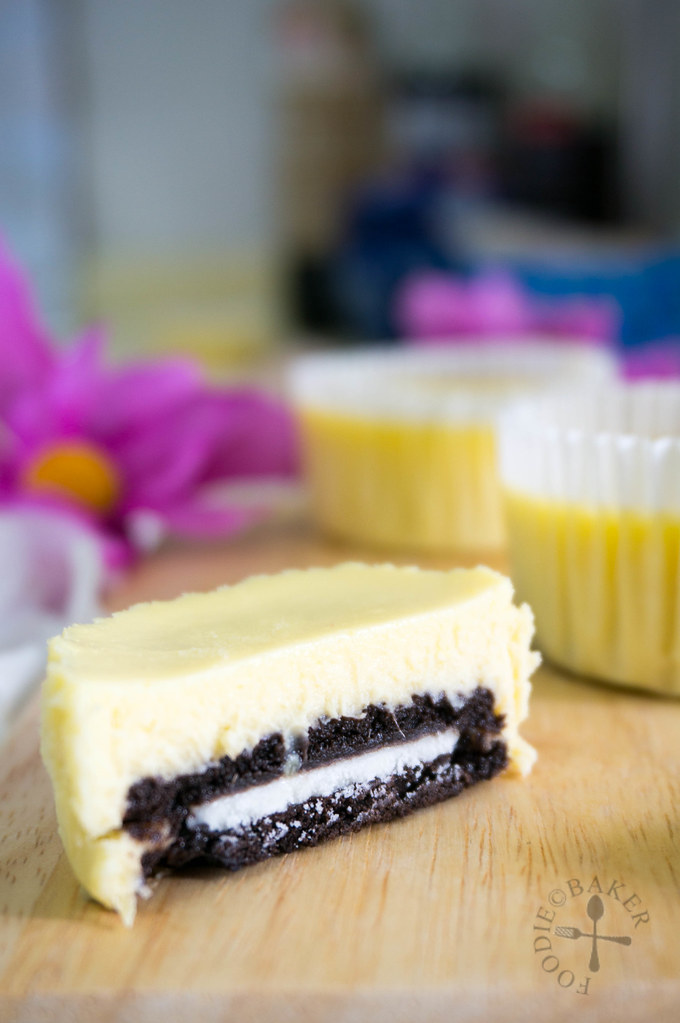 I first baked some baby cheesecakes because they are easier to share with friends. To save the hassle of making the crust (as I just wanted to see how it would taste like), I simply dropped a Oreo cookie into each muffin tin - but unfortunately I underbaked them so they were not very set. It's good, but the texture was a bit too soft.

So for my second try, I rebaked the cheesecake, this time making a whole cake with a tall digestive biscuits crust (as this was my friend's birthday cake) and baking it longer until the top is a little golden brown. I didn't frost/glaze it because I didn't want the frosting/glaze to overpower the durian, also, somehow I liked the rustic look of the browned cheesecake. 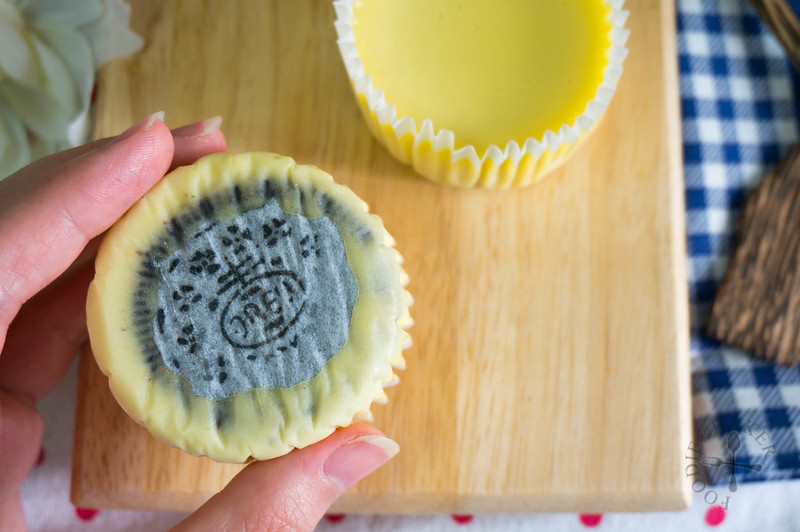 The taste test was passed with flying colours - the restaurant staff who didn't like durian was quite put off with the smell (she couldn't figure out what smell that was ooops), but she still kindly divide the cake for us. But for durian lovers like us, this cake is simply heavenly! The texture was just right and the taste of durian was so intense! Definitely a cake to impress and to please. 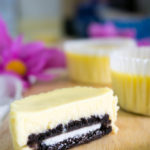 - For a Oreo version: line the muffin tin with paper liners and drop an Oreo biscuit inside. Fill with cheesecake batter and bake immediately for 20 to 25 minutes at 160 degrees Celsius. (Makes 12 mini cheesecakes)
- Adapted from Kitchen Corner
Tried this recipe?Mention @foodiebaker or tag #foodiebaker!