Whenever I make crêpes - be it for a cake, a dessert or just with ice cream - there will tend to be a few crêpes leftover. Not wanting to just eat them with more ice cream 😛 I decided to make a savoury Egg and Cheese Crêpe Square instead, which takes less than 10 minutes to make and it's really tasty!

I used two crêpes instead of one to make this Egg and Cheese Crêpe Square, simply because I had 2 crêpes leftover - and it surprisingly turned out to be a good thing! The two crêpes are "glued" together with cheese (I used mozzarella this time round but you can use any cheese you like) - the bottom crêpe layer, which is in direct contact with the pan, becomes golden-brown and crispy, while the upper crêpe stays soft and chewy, yielding two different textures at the same time! Of course you can just use one crêpe if you have only one crêpe left 😉 I also sprinkled the cheese around the edges so that the melted cheese will "glue" the crêpe to form a square more easily.

It's easy to adapt this Egg and Cheese Crêpe Square into anything you like - you can add ham, smoked salmon, canned tuna, sautéed mushrooms, sautéed spinach etc onto the second crêpe before cracking the egg; or spread some aioli or mustard or whatever sauce you like. Just make sure don't overfill the crêpe otherwise it won't close properly to form a square! 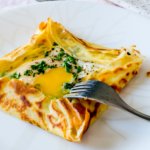