I posted about this bowl of noodles soup quite some time ago and since then I've made a few changes and this has became my go-to dish on days when I'm lazy to whip up more elaborated meals. It is essentially a one-pot healthy and tasty noodles soup, with a very simple home-made broth. The broth is very simple - flavored with icefish, onion and prawn heads, and it doesn't need hours on the stove cooking. You can also use chicken stock, pork stock or vegetable stock instead - will talk about the substitution how-to at the end of the post.

Ingredients wise I am now sticking to minced pork (marinated first), carrot, prawns and egg. If I have other vegetables I'll also add them in if I feel like doing so - so it's a really versatile dish!

I always marinate my meat first - it gives them flavour and some of the marinade will go into the soup eventually, giving it flavour as well. Light soy sauce, sesame oil and a dash of white pepper - all these can be found easily in the supermarkets. You can substitute with minced chicken if preferred.

In order to get soft lumps of pork (like those we usually eat in hawker centers), mix in water to the minced pork until the consistency is slightly loose and sticky, a trick I learned from my mom.

Icefish, as I've mentioned in my Ee Mein Soup post, they are freshwater fishes that are more commonly used in Asian dishes. In Asian markets, we are able to get them fresh or dried. The fresh ones are translucent (a little milky in colour) and are used mainly in stir-fry dishes. The dried ones are white in colour and are used mainly in soups for flavour. In Chinese, they are called yin yu (银鱼). The one that I'm using are dried icefishes.

If you don't have icefishes and/or are lazy to chop some onion, simply heat up some chicken or vegetable stock (home-made stock is the best!) in the pot and proceed from there.

Prawn heads are amazing at giving the soup sweetness and depth of flavour - not sure whether frozen prawns will be able to impart the same flavour to the soup...

Do check out my post on how to peel and devein prawns (it's real easy!) - you'll never need to buy peeled prawns again 😉

Scoop lumps of pork into the boiling soup, making sure they are not dropped in the same place, otherwise the pork will stick to each other.

The mee sua cooks real fast, about 2 to 3 minutes. Mee sua is a type of Chinese noodles made from wheat flour. It is very thin and brittle, but it’s an important food during Chinese festivals/banquets. This is because Mee Sua is also known as “Longevity Noodles”, hence many Chinese eat Mee Sua on their birthdays. You can substitute with other noodles - like udon, ramen, bee hoon (rice vermicelli). If you are using bee hoon, soak them in warm water until they have softened thoroughly before adding into the soup to be reheated.

I love my egg to stay whole, with the yolk semi-cooked. X likes his egg to be scrambled into the soup. Use whichever way that you like! (I crack the egg into a bowl before adding it in just for photo purposes - but it is also easier to help keep your egg whole.) Ladle into soup bowls and serve! 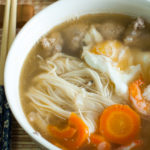 - The silver fish we used for the stock is not the pest silverfish but salangidae, but in Chinese we call them 银鱼, which is directly translated to silver fish.
- Recipe adapted from my Mom
Tried this recipe?Mention @foodiebaker or tag #foodiebaker!