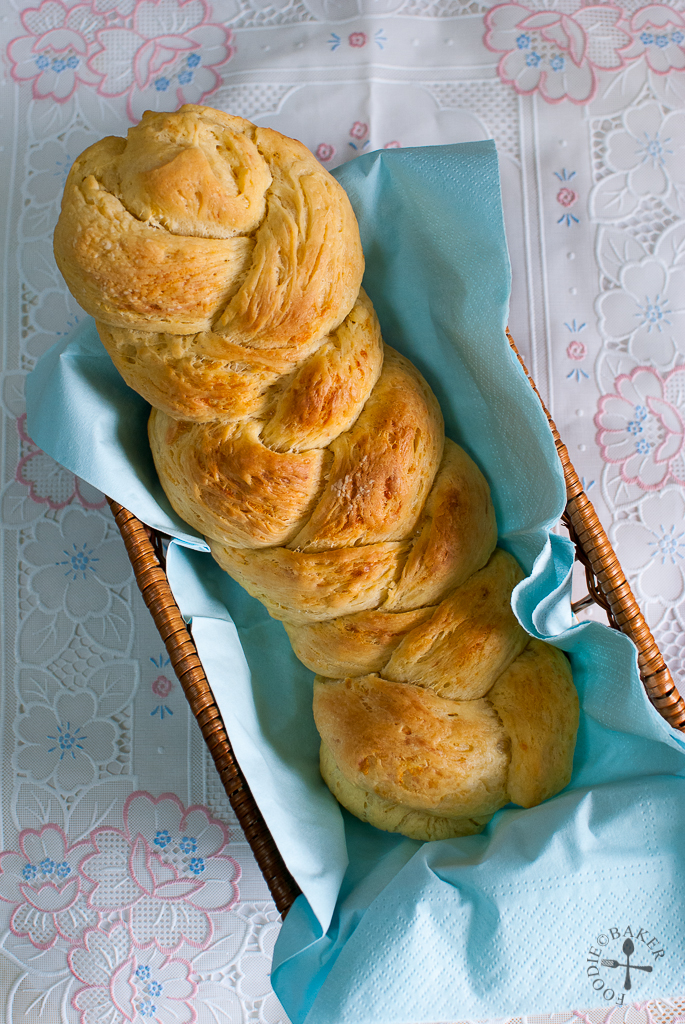 It's another bread baking session! In the past I have never thought of baking bread because all the kneading, rising and shaping all sounded too daunting to me. But, luckily for YouTube, I'm gradually getting the hang of bread baking and it's getting fun!

This bake is actually for The Home Bakers, and we are actually baking from a recipe book called Coffee Cakes by Lou Seibert Pappas. The bake this time round was chosen by Alice of I Love.I Cook.I Bake - a savoury brioche filled with creamy gruyere. I find it a bit funny that the author calls it Coffee Cakes because there are actually several bread recipes inside, and one of them was chosen some time back - the Danish Chocolate Swirl Coffee Bread. Nevertheless, this is my first time making brioche and I was pretty excited!

The dough was sticky - so sticky that I'm glad I didn't try to knead it with my hands. I made only ⅓ of the recipe so I kneaded the dough using my hand-held mixer attached with a dough hook. Gruyere was the original cheese stated in the recipe but it was so expensive! Luckily cheddar was on sale and since many other foodies also had positive results with cheddar, I decided to go with cheddar.

I had a little problem braiding the bread as I didn't know how thin I am supposed to roll the dough "rope" into. In addition, the dough shown in the YouTube videos seemed so easy to handle but mine was pretty soft and flimsy, making it a bit hard to shape the bread. This is probably due to the warm temperature here... Luckily the braid still turned out pretty presentable haha! 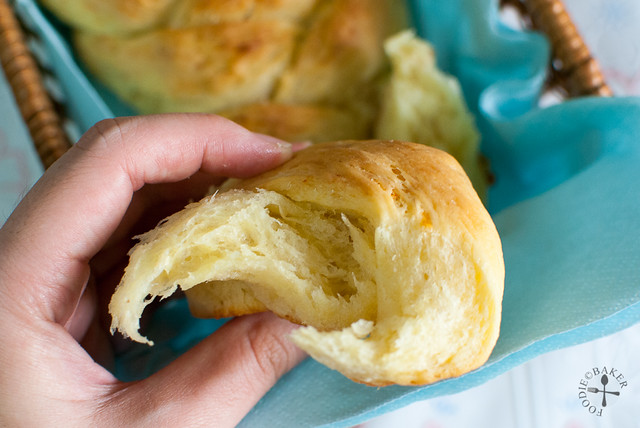 Texture wise this is a definite thumbs up! The exterior is a bit crusty but the interior is so soft and fluffy that I swooned when I tore the bread apart. The cheese taste was subtle when fresh from the oven but intensifies over the next few days. Thankfully the bread still remained relatively soft for the next 2 days, so it's still pretty good! I would love to serve this bread alongside with some soup the next time, I can totally imagine dipping the slightly salty and cheesy bread into a bowl of creamy soup... mmm!

And here's how to make them!

I'm submitting this to The Home Bakers organized by Joyce from The Kitchen Flavours. The host this time round is Alice from I Love I Cook I Bake. As part of the rules of the bake, I'm not allowed to post the full recipe, so I'm leaving you with the portion that I've used and listed the modifications I've made. Do pop by her site for the full recipe! Hope over here to see all other foodies' take on the recipe!

As egg is also used in this recipe, I'm also going to submit this to Little Thumbs Up organised by Doreen from my little favourite DIY and Zoe from Bake for Happy Kids. This month's theme - Egg - is hosted by Yen from Eat your heart out. The recipes are all linked at this post!

For the full instructions, please head over to Alice's blog!