So many things to blog about, so little time! I reckon I have about 7 or 8 recipes waiting to be processed (photos) and blogged about, not to mention all the super-long-ago travel posts! I've been mixing up the order of the recipes posted because of the blogging events, but eventually I'm sure I'll get there. 😉 Do follow me on Instagram (@foodiebaker) to know the recent happenings in the kitchen and in my life!

Back to this recipe... it's another bread recipe! Polo bun is a type of sweet bread, very popular in Hong Kong, Macau and Japan. In Japan, the bread is popularly known as melon pan. The word polo actually means pineapple in Chinese, however, the bread does not contain pineapple or melon at all. It is named that way because of its appearance! (Well, though to be perfectly honest, I don't think it look very much like a pineapple/melon...) There are 2 components in this bread - the normal sweet bread dough and the pastry crust. The pastry crust is made by creaming butter, flour and sugar together then divided on top of the bread dough. Upon baking, the pastry crust will become crispy and it creates a very nice and tasty contrast against the soft and fluffy bread. So you get crispy and soft textures in one bite, what's not ot love about this bread? I've adapted the recipe from Kitchen Corner, substituting the milk powder + water combination with milk and made 8 mini buns instead of 4 regular ones. I've also used the dough hook attachment on my handheld mixer to knead the bread this time - because I want to try out how good the dough hook is. I stopped the mixer and rested it every 5 minutes as I was worried that the mixer would overheat and breakdown, but luckily that didn't happen. With the mixer doing most of the work, making this bread became really easy (really yearning for a good stand mixer...)

The freshly baked bread was so soft and fluffy, but I found the pastry crust a little too thin, hence not crunchy enough at the top - so I'd probably double the pastry crust the next time. The bun became a little tougher the next day because no preservatives was used, but that's to be expected from a homemade bread. So to solve the problem, I've frozen the rest of the buns (see note number 6 at the end), so whenever I want to enjoy a "freshly baked" polo bun, I just need to warm it up in the oven - and amazingly it retains the softly and pillowy texture!

And here's how to make them: Soft and fluffy bread - best served fresh from the oven! 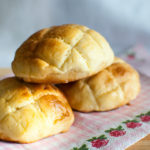