This is an easy and a little bit cheater-bug recipe from Jamie Oliver. In his old series, I remember Jamie liked to make more fancy food that required harder-to-obtain ingredients and tougher skills. Now, in a bid to encourage people to eat healthily, Jamie started the Food Revolution series, and one of them includes this 30 minutes meal series - where one can get a main, one to two sides and one dessert ready in under 30 minutes. It was truly inspiring as even though he took shortcuts here and there, he doesn't compromise on the flavour and the looks of the dish. This chicken pie come from one of his episodes and I tried it out for a gathering with my friends.

Instead of making a huge pie like Jamie, I chose to make individual pies as mini pies are cuter and easier to apportion. I also modified his recipe quite a bit based on my experience with handling chicken and due to lack of herbs (more notes in the actual recipe below). The chicken mixture is really scrumptious - I almost wanted to forgo making a pie and just serve it with spaghetti! Sorry for the blur photo!

One huge blunder that I made is that instead of getting frozen puff pastry, I took the wrong package and ended up with frozen shortcrust pastry! It was such a silly mistake! And I was still wondering why my pastry did not puff up at all during baking, until I got so suspicious of the crust that I went to check the packaging and then realized I got the wrong one. Thankfully everyone still loved the crust, including me 😉

Overall it was an absolutely delicious chicken pie that was flavourful, creamy and thick. Even though it took 15 minutes longer for the whole pie to be done (because of the marinating), its a really quick, easy and delicious pie. I've already got requests to make it again soon, so do give the recipe a try soon! 🙂 Add in a little corn flour - this helps to tenderize the chicken (I have no idea how it does it, but apparently corn flour does the trick in keeping meat tender.) Once again, my apologies for such a blurry photo!

In goes some soy sauce next - gives it some colour and saltiness. Mix well and leave it aside to marinate for 15 minutes. While marinating, dice one potato into small cubes. Add in the mushrooms next (don't clean the pan!) Sauté until the mushrooms have shrieked in size - the mushrooms impart a very thick and rich flavour which makes the pie exceptionally delicious! Add in the potatoes... ... And the chicken pieces. Stir it around and add in some of chicken stock.

And yes, that's my hand.

My hand reminds me of the claw in Toys Story, like, seriously! Putting my hand issue aside, add in some plain flour and a knob of butter. The flour will thicken the sauce and the butter gives it an extra depth of flavour. Bring it to a boil and simmer until the mixture has thickened. Season with salt, black pepper and your favourite herbs (Jamie used bay leaf, I used dried sage). Transfer the mixture into a little ramekins, then top with a piece of pastry (short crust or puff - whichever is your favourite).

Brush the top generously with beaten egg and bake away! Bake until the top is golden and the sauce is bubbly! 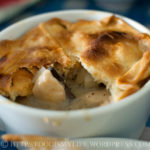 Super Naggy: If I didn't remember wrongly, Jamie used bay leaf as his choice of herbs when cooking this dish, as I don't have any on hand, I used sage, which, if I didn't remember wrongly, goes pretty well with chicken (well the pie turned out delicious in the end, so I guess use your favourite herbs for this dish and you shouldn't go very wrong!)