I missed the previous Bake Along for rugelach as my attempt wasn't very successful... A little disappointed and discouraged over the bake, I was very delighted when I noted that the next Bake Along is a chocolate pound cake! Chocolate always has the ability to pick me up, does it have the same effect on you too?

This chocolate cake requires the cocoa to be dissolved in hot cream, but if you don't have cream on hand, water or milk will most likely work just fine. It is a very simple cake to put together and to up the chocolatey bar, I threw in some dark chocolate chips - yummy and it certainly brightened my day!

Here's how to make them!

(P.S. Step-by-step photos is only for ⅓ of the full recipe! Sorry for the lack of photos as I was rushing for time!)

I'm submitting this to Bake-Along hosted by Zoe from Bake for Happy Kids, Joyce from Kitchen Flavours and Lena from Her Frozen Wings! 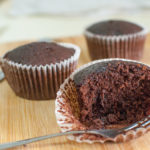