It's time for Bake Along again! After a little break during Christmas period, Lena (Her Frozen Wings), Joyce from (Kitchen Flavours) and Zoe from (Bake for Happy Kids) decided to bake this really interesting cake - Cold Oven Cream Cheese Pound Cake.

Just as its name suggests, this cake is baked in a oven that does not require pre-heating. Though it's supposed to save the "hassle" of preheating the oven, I was so used to the notion of preheating the oven that there were several times my hand would involuntarily reach for the oven timer while mixing the batter - then I would remember that there's no preheating required at all! Did any bakers experienced the same preheat-the-oven-syndrome as me? It was said that this enables the cake to rise higher with a darker crust. I'm not very sure whether this is true as I don't have a comparison sample...

Anyways, I made a few changes by baking only ⅓ of the recipe, cutting down the sugar and also introduced chocolate into some of the batter. I wanted to create a marble cake but the marbling wasn't as obvious as I had wanted it to be - probably because I used a tin that is a little too large. I guess I would try baking the cake the next time in a 6-inch tin for the amount I'm baking.

I liked this cake because it has a really moist and soft texture (though a little too crumbly) with a nice buttery fragrance. And it is a great idea to use up my leftover cream cheese at home if I don't feel like baking cheesecakes!

I wonder how are other foodies' bakes?

Room temperature butter and cream cheese are easier to cream, so take them out of the refrigerator 30 minutes before using.

Again, the recipe uses an ingredient which I never have at home - cake flour. I always used this formula to substitute for cake flour (I found the formula online): ¼ cup of corn flour / corn starch + ¾ cup of plain flour = 1 cup of cake flour. I'm submitting this to Bake Along hosted by Lena from Her Frozen Wings, Joyce from The Cooking Gallery/Kitchen Flavours and Zoe from Bake for Happy Kids. 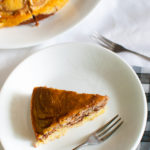 - Adapted from The Spiced Life
Tried this recipe?Mention @foodiebaker or tag #foodiebaker!