Taking a break from Chinese New Year baking and diving into Valentine's Day baking - Japanese Strawberry Shortcake! Okay not really because I don't even celebrate this day in the first place... oops! The reason why I'm baking this cake is because the theme of Bake-Along's this time round is Strawberry Shortcake and since strawberry is in season here right now, there is just no excuse to not bake this delicious and beautiful-looking cake.

For the sponge cake, I adapted the recipe from Japanese Cooking 101, adding some orange zest for a citrus-y boost and using the method I learnt from Julia Child's genoise. The sponge cake bakes up beautifully and have a nice flat surface, so I don't have to slice off the top at all.

I baked this cake twice as for the first attempt, I did not scale back the sponge cake recipe and the sponge was so tall that the cake couldn't support its own weight and was on the verge of collapsing. The strawberries in the middle were also halved, and though this makes the cake looks a bit prettier when cut, I find it difficult to get a clean cut. So for the second attempt, I scaled back the sponge cake recipe and chopped the strawberries - definitely much better! I also decorated the cake differently to see which one looks nicer, and I think the first one looks way better, don't you think so?

Nevertheless, both attempts are equally delicious! Japanese Strawberry Shortcake is such a classic that I think everyone will love. Baking this cake is not as difficult as it seems, as long as you follow the steps closely. So bake this for someone you love today!

This is for Bake-Along #91 hosted by Joyce from Kitchen Flavours, Lena, from Frozen wings and Zoe from Bake for Happy Kids. 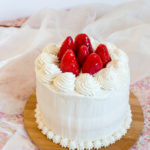 - If you want to bake a 7-inch cake, increase all the ingredients by 50%. - To make this cake in advance: make the cake and syrup one day before and store them, covered, in the refrigerator. Make the whipped cream and assemble the cake on the day itself. - Sponge cake recipe adapted from Japanese Cooking 101.
Tried this recipe?Mention @foodiebaker or tag #foodiebaker!