Hainanese Chicken Rice is a classic and popular dish loved by many. It consists of silky smooth poached chicken and steamed seasoned rice. The rice dish is served with chili sauce, ginger sauce and/or thick dark soy sauce on the side.

My Love for Chicken Rice

I grew up eating a lot of poached chicken. My maternal grandparents (in Malaysia) reared chickens in their backyard and during every major Chinese festivities, they would slaughter one or two of their chickens for Chinese prayers. Once the chickens were slaughtered, they were scalded in hot water to loosen the feathers. The grandchildren (me included) would then usually help out by plucking off the chicken feathers. The chicken was poached whole and my grandfather would be in-charged of chopping up the chicken after it had cooled down. I fondly remembered the dogs that my grandparents kept would be on "standby" and waiting besides my grandfather, preying on that stray piece of meat or bone that might fall off the chopping board. My grandmother would always give me the chicken drumstick (I was the favoured grandchildren =p)

After living in Singapore for so many years, I find myself becoming more particular about my chicken rice: the taste and texture of the chicken, the fragrance and flavour of the rice, and even the chili is an important component that cannot be neglected.

This Hainanese chicken rice recipe is originally adapted from 3 websites - Rasa Malaysia, Steamy Kitchen and Adam Liaw - but over the years I have tweaked and made modifications to suit my tastes. I don't cook it often as it's too convenient to just buy one packet of chicken rice in Singapore, but I still like to make and serve this as one of the dishes during Chinese New Year, just like how my grandparents used to do in the past.

There are generally two types of chickens available in Singapore: broiler chicken and kampong chicken. I personally prefer kampung chicken because the meat is leaner and firmer. The skin is also seemingly firmer and has a slight yellowish tint (most likely from eating corn) which looks more appetising to me. Nothing wrong with using broiler chicken either - it is cheaper and usually larger than kampung chicken so you get more meat per dollar. Purely personal preference and either type of chicken should work well.

The only kind of chicken I will not use is frozen chicken. I will only go for fresh chicken when cooking Hainanese chicken rice.

Notes for the Chicken

Here are a few notes to ensure your poached chicken comes out perfect with a jelly-like skin and soft and tender meat.

Exfoliate the chicken with salt. Scrubbing the chicken with coarse salt really helps to make the skin tender and smoother. Don't use fine table salt as it's too fine, you will not get the exfoliation effect.

Gentle poaching and steeping. The chicken is gently poached and then steeped in hot water so that the meat cooks gently and gradually. This prevents the meat from being overcooked, and helps to retain the juices within the chicken.

Ice bath. Dunking the poached chicken in ice water will "shock" the chicken skin, resulting in a more elastic and springy skin. It also stops the meat from continuing to cook when removed from the poaching water.

Chopping the chicken. I'll be honest - I'm not good at it. But here are some videos that I usually refer to whenever I need to chop up a chicken: Video 1; Video 2; Video 3; Video 4.

Notes for the Rice

Use a rice cooker. It requires lesser chicken stock to cook the same amount of rice.

Notes for the Soup

After poaching the chicken, the stock can be used to make a simple soup to go with the chicken rice.

Add back the chicken feet and chicken head/neck. There are flavour and gelatin in the chicken feet, head/neck which have not been fully extracted during cooking. And since they are parts that no one will eat, I will always add them back to the soup to continue cooking.

Notes for the Chili

Calamansi is different from key lime. These two limes are not the same. Calamansi are smaller and softer than key limes. Make sure you are using the smaller calamansi. It is a pain to zest them but they add a huge fragrance to the chili sauce.

Big chili is different from bird's eye chili. Bird's eye chili is a lot spicier than the normal big chili. I don't like a chili sauce that is too overly spicy as it will overpower the original taste of the food, and I personally also don't take spicy food very well. This recipe uses only 2 bird's eye chili but if you love spicy food, feel free to add more.

Great steamboat chili. This chili sauce is also great for steamboat. I like to stir in fresh coriander leaves and sesame seeds to use as a dipping sauce for meats.

Hainanese chicken rice is one of my favourite foods as not only is it delicious, it also brings back fond memories of the time I had with my grandparents (the poached chicken part haha). If cooking a whole chicken feels intimidating, you can try my One-Pot Rice Cooker Hainanese Chicken Rice recipe. It's also delicious but much easier, and perfect for a weekday night. But still, I hope you could give this Hainanese chicken rice recipe a try one day! 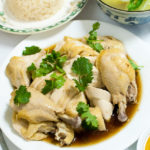 A classic and popular dish loved by many, consisting of silky smooth poached chicken and steamed seasoned rice, and served with chili sauce and thick dark soy sauce.
Servings: 4 people

Update 28/8/2016: Recipe updated to include ½ large red onion in the rice. You can blend the onion, garlic and ginger in a food processor into a paste before cooking it, you won't taste any bits in the rice, but the flavour these 3 gave to the rice is irresistible!

Update 19/12/2022: Updated post to include tips and notes on making Hainanese chicken rice. Updated recipe to include my new favourite chicken rice chili recipe. Still trying to update the photos with newer ones!