Here is the cake I promised! It's a chocolate genoise layered cake with chocolate mousse and Oreo filling, coated with a delicious and creamy layer of vanilla filling and covered all over with Oreo crumbs.

No wonder I'm growing... horizontally - I have been eating way too many cakes lately *cries* (check out the culprits: this, this and this)

But well, the idea of having a chocolate mousse and Oreo filling cake is too good to pass.

The chocolate genoise is simply delicious - it's very light, airy and porous. It absorbs syrup readily so it can soak up lots of delicious flavours (imagine brushing it with a rum-flavoured syrup!) Using a genoise as a cake base helps to lighten the overall flavours - I can finish one thick slice by myself without feeling that it's too rich.

The only problem is that I can't slice a cake... for nuts! Well, my skill has definitely improved from the past but there's no consistency - most of the times I still end up with cake slices of varying heights. I really need to practice more often... The chocolate mousse portion can't be any simpler - it's made with just chocolate and whipping cream. I used Varlhona dark chocolate, which gives a very deep and rich chocolate flavour - absolute YUMS.

I had some leftover Oreo cream cheese frosting from a previous recipe - because it's not enough to frost the whole cake, I decided to use it as a filling. I originally wanted to mix some huge chunks of Oreos into the filling but in the end was too lazy to do so... so plain it is! As for the frosting, I tried out a new recipe that requires cooking flour and milk into a paste and adding it into a creamed butter and sugar mixture. I like the recipe because the frosting is very steady - what I mean is that even though the temperature was pretty warm in the kitchen that day, the frosting did not melt or ooze or anything. Of course it's still better chilled, but it doesn't soften as fast as a cream cheese frosting and it pipes really well. As for taste-wise, it's milky and creamy - not my favourite but I'm hoping to make a chocolate version of this soon. Overall, it's a light, moist, soft and delicious cake. Even my mom who's not fond of cream cakes finds this delicious! I am 200% certain that this cake will definitely be a crowd-pleaser - who doesn't love chocolate, Oreos and cake altogether? 😉

I've not taken photos of how to make the individual components (except for the genoise in my previous post), but I've taken photos of the assembly. It would definitely be easier if you have a lazy susan / cake decorating turn table as it makes the decorating much easier. Start off with a layer of chocolate genoise.

I don't have a cake board that is 7x3.5-inch, so I made my own by cutting a piece of cardboard and then wrapping it with two layers of aluminum foil - an instant cake board done! Brush with a layer of syrup.

There's no need to drench the cake in syrup, just a thin layer will do. The syrup will help to prevent the cake from drying out too fast when stored in the refrigerator. It can also help to boost a bit of flavours if you flavoured your syrup with alcohol 😉 Spread a layer of chocolate mousse.

I'm using the most simple recipe for the chocolate mousse - just Varlhona dark chocolate and whipping cream. It's so easy and it's so delicious! Brush both sides of the second layer with syrup. Top it with some delicious Oreo filling.

This is my leftover Oreo cream cheese filling from this recipe. So, so, so delicious! Up goes the third layer. And smooth it with the remaining mousse. The last layer goes up. Cover the sides and top with a buttercream frosting, then decorate it!

I wanted to coat mine all over with Oreos crumbs, so I just slapped the frosting on and press the Oreo crumbs all over. I'm submitting this to Aspiring Bakers #18: Layers of Love (April 2012) hosted by Sam of Sweet Samsations!

This recipe consists of four components:

It's much, much easier and less complicated to bake and assemble this cake (when compared to this crazy one).

Busy Plan:
Day 1: Make the sugar syrup and chocolate genoise. Keep them in the refrigerator.
Day 2: Make the mousse and frosting. Assemble the cake and keep it refrigerated. Serve.

Crazy Plan:
Day 1: Make the sugar syrup, bake the chocolate genoise and make the mousse and frosting. Assemble the cake after the genoise has cooled completely and keep it refrigerated. Serve.

My plan was a busy one and it's very manageable. One thing to note is that I already had some leftover cream cheese frosting (which is used in the filling) so I made the frosting using lesser amounts than stated in the recipe below. I have provided recipes to both types of buttercream - a cream cheese and a plain version, choose whichever you like! The measurements are not exact (just an estimation of how much you'll need to fill, frost a thin layer and to pipe the rosettes on top). You may end up with extra filling / frosting - depending on how much you use to frost.

If you don't want to use Oreo crumbs to coat all around, remember to make double the amount of frosting so that you have enough to frost it completely (mine was a thin layer - just enough so that the Oreo crumbs can adhere onto the cake). 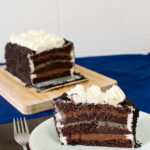