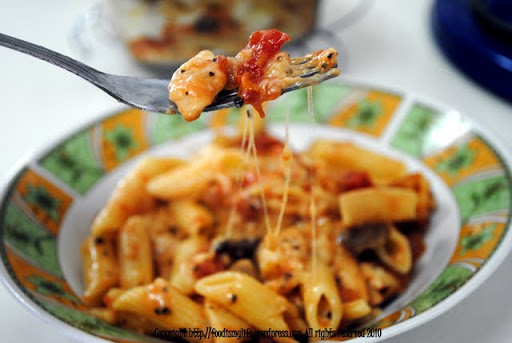 It’s been a very long while, isn’t it? I don’t blame you if you stop coming to my blog, but I am grateful if you still pop by once in a while to see if there’s any new updates. People say that “being busy” is just an excuse, they say that one can always find some time in doing the things they want to do, something along the line that it’s all about time management. 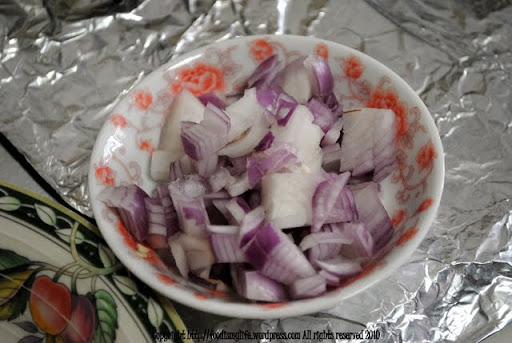 Well, I guess it’s true to a certain extent, but when I find all the quizzes and projects piling up at a rate faster than I can complete them, I have to call a stop. I am still a student and I guess I still have to set my priorities right – studies first. So I stop baking. I ate instant noodles for lunch over the past few weekends (to my utmost horror). It’s so horrible. But thankfully, the quizzes and projects are over – for now, and I find the urge to bake/cook is crawling back so intensely that I know I must do some baking or cooking this weekend. And guess what? I did both! I baked some fabulous peanut butter cookies (which I will be sharing hopefully soon) and made a new pasta dish, inspired from TCC’s Baked Chicken Linguine. 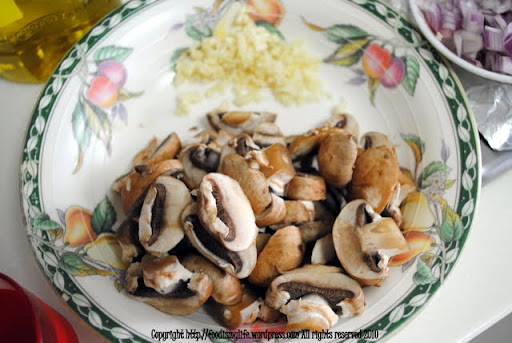 Most of the time I will use minced beef for my pasta dishes but today I’m looking for something lighter and not so heavy on the taste, so I chose chicken. And because I have some going-to-expire mozzarella cheese sitting around, I decided to bake a pasta dish. The pasta sauce is modified from Pioneer Woman‘s Ryan’s Bolognese Sauce. I’ve tried the original recipe before in a lasagna, and I love it. I fell head over heels in love with the recipe because 1) it is yummy, 2) it is absolutely yummy. 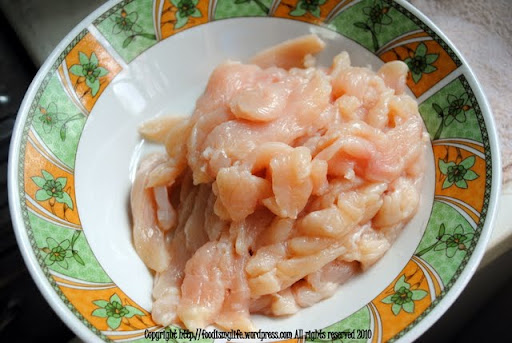 This time round I omitted all the vegetables because my brother is extremely afraid to them, especially carrots. So I sautéed the onions, then the chicken strips which I marinated earlier with some light soy sauce and corn flour. This will enable the chicken to have some taste and turn brown when it’s cooked (in my opinion) instead of looking whitish like a sick chicken. The corn flour helps to tenderise the meat, hence even after all the simmering and baking, the chicken strips will not toughen up (sounds funny when I reread this sentence but I can’t think of a better way to phrase them). After that, the mushrooms go in and then the canned tomatoes. I did not add any red wine or chicken stock. However, I added 1/4 cup of milk and 1/4 cup of Parmesan cheese. Why? Well I just want to try it out that’s all. The resulting sauce is very, very yummy. So yummy that I just want to dump the al dente penne in and stir until all mixed up. But no, I resisted the temptation. 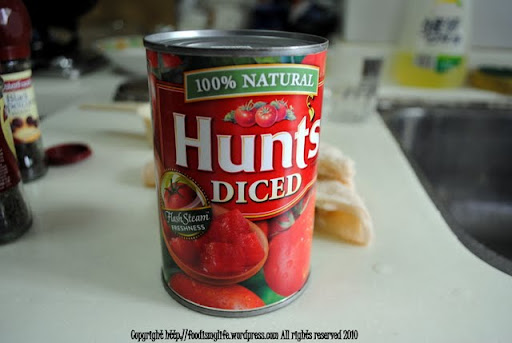 I baked the penne with the mozzarella cheese and the meat sauce and the results are fabulous. It is not at all heavy like all the meaty lagsana. I cook with the intention of serving two, but the resulting pasta could have served 3. I don’t know if you will like it, but I know I do and I hope you will! (: 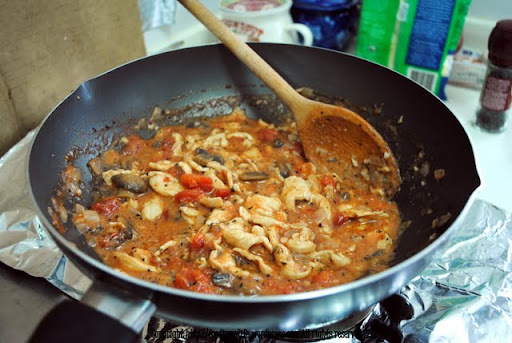 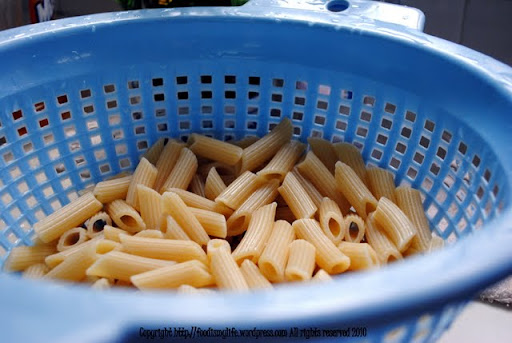 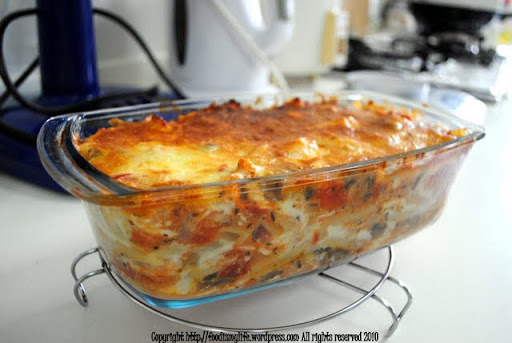 Bring a huge pot of water to boil and add some salt to raise the boiling point. Add in some oil and when the water is on a rolling boil, dump in the Penne and cook until really al dente. You will want the pasta to still have a bite so that it will not be overcooked when it is baking later on. Drain and set aside.

While the water is boiling/pasta is cooking, heat a couple of tablespoons of olive in a deep pot. When the oil is hot, add in the onion and sauté until translucent. While the onion is cooking, marinate the chicken strips with 2 tablespoons of soy sauce and 1 tablespoon of corn flour. Once the onion is translucent, add in the chicken and stir occasionally, until the chicken is cooked. Form a hole in the middle of the pot and add in the sliced button mushrooms, stirring occasionally until the mushrooms have reduced. Stir in garlic and then the can of diced tomatoes. Bring it to a boil and lower the heat to a simmer. Add in any herbs you like such as basil, thyme or rosemary etc. Simmer for about 10 to 15 minutes or until the tomatoes have softened. Stir in the milk and cheese and reduce it until it reaches the consistency you like. Turn the heat off and season with salt and black pepper. As the tomatoes and Parmesan already have some salt in them, make sure to taste the sauce before adding the salt.

Get a casserole dish. Spread a little of the sauce on the bottom of the dish and line with the pasta. Spread another layer of the sauce then top with mozzarella cheese. Then spoon some sauce on top and repeat, ending with mozzarella cheese on top (that is if you are not using Parmesan; if using Parmesan cheese to top the layer off, end off with a sauce layer then top with Parmesan cheese). Bake at 190 degrees Celsius for 20 minutes until the sauce is bubbling, the pasta is cooked, and the top is browned. Let stand for 5 minutes before serving. 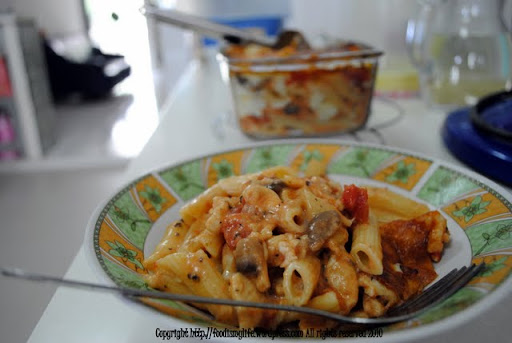 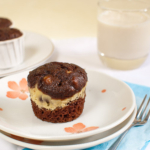 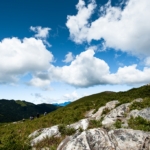 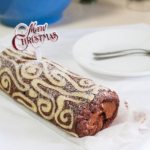 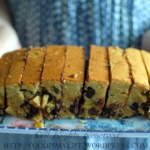 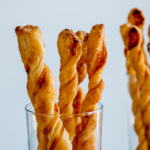 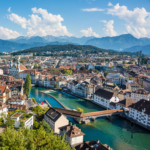 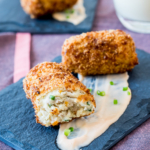 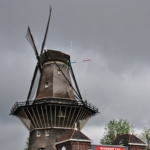