I originally wanted to blog about my Taiwan trip, but unfortunately Flickr is down, and since I've already uploaded photos for this noodle dish, I shall blog about it instead!

Sweet potato noodles are, as its name suggests, made with sweet potato starch. It is different from the transparent cellophane noodles (冬粉) which are made with mung bean starch. Personally I felt that both have roughly the same texture and both being tasteless on their own, they absorb flavours very well. Sweet potato noodles are often used in a very popular Korean dish called japchae - it is made by stir-frying sweet potato noodles with various vegetables and meat and flavoured with sesame oil, soy sauce and sugar. Just talking about it is making me drool already! I found this japchae recipe from an iPhone magazine application - the Kfood Magazine app. Though the app features only about 5 Korean dishes, each dish came with step-by-step videos (yes videos, not photos!) which is a major plus point for those new to Korean cuisine!

I kept the marinade roughly the same, but changed most of the vegetables as those were what I have on hand. This is a very, very easy and versatile dish that I strongly recommend everyone to try. I have already cooked this twice and I know I will be cooking it again soon, perhaps the next time with pork or chicken! 😉

There are a lot of step-by-step photos this time round so I've reduced the image to an even smaller size so that the post won't be so lengthy. Let's make some japchae now!

The marinade gives the beef slices a very wonderful flavour. The marinade may seem watery and a lot, but don't worry, as the rest will be absorbed by the noodles later on, giving the noodles a very deep and delicious taste.

I love adding eggs in my noodle dishes - be it in noodle soup or in fried noodles. My favourite way was to fry, roll and slice thinly, but you can scramble the eggs if you don't want to go through all these trouble - whichever way works for you! Hope you will like this dish as much as I do! 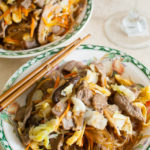