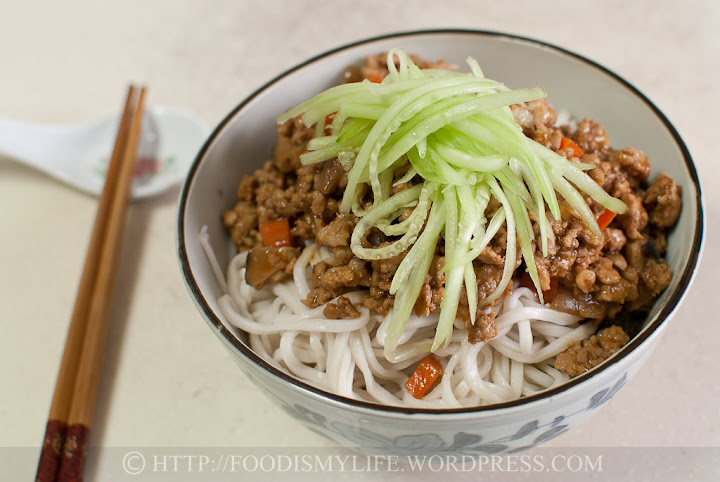 Zha Jiang Mian / Za Jiang Mein (炸酱面) literally means fried (pork) sauce noodles - it is a popular Northern Chinese dish that consists of noodles topped with a minced meat sauce that is fried in bean paste. The sauce is similar to a bolognese sauce - except that this does not have tomatoes in them.

The most important ingredient would have to be the bean paste (more explanation at the end of the post). It is the ingredient that gives this dish a unique and delicious flavour.

I got this recipe from X's mom and it's a really simple and delicious dish to prepare! I've also included a Chinese version of the dish as well because... well, it's a Chinese dish! 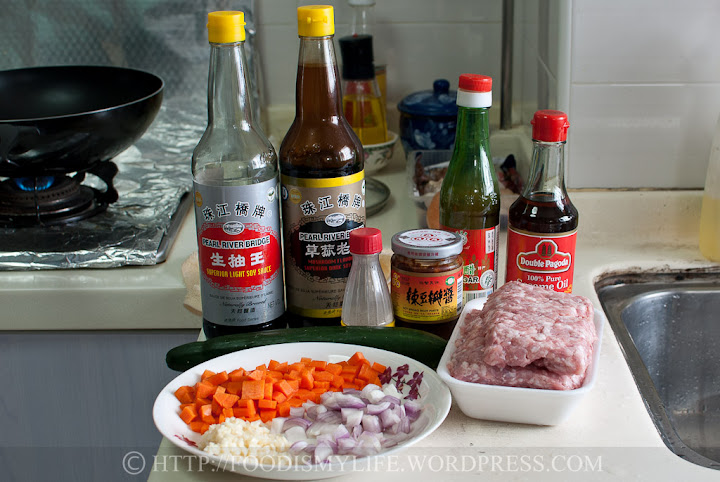 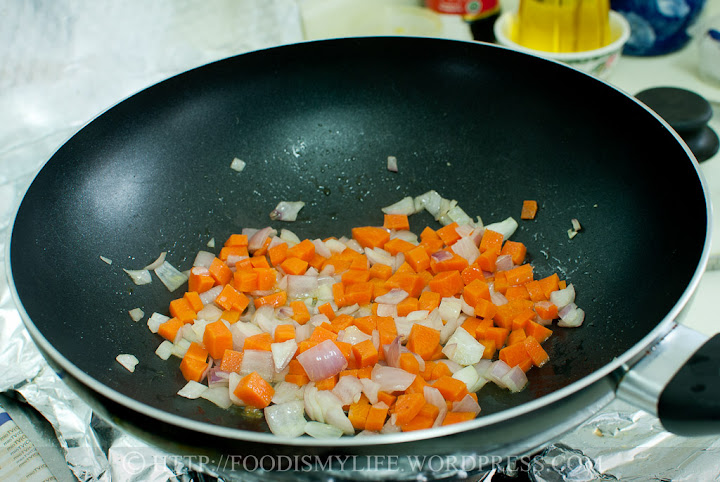 First, fry the carrot and onion. 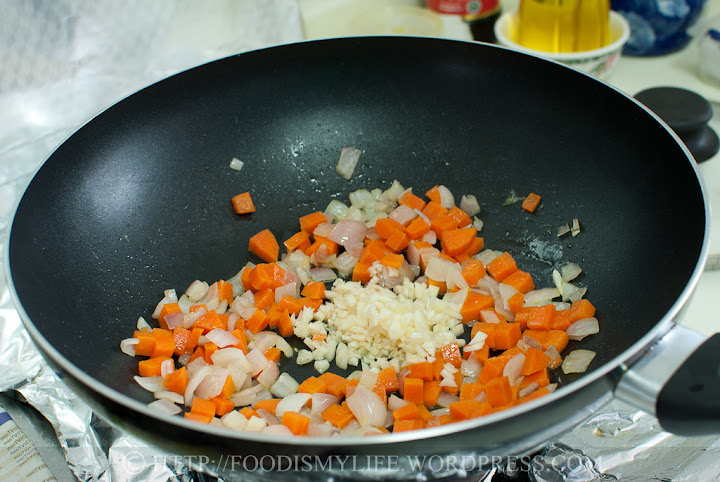 In goes the garlic. 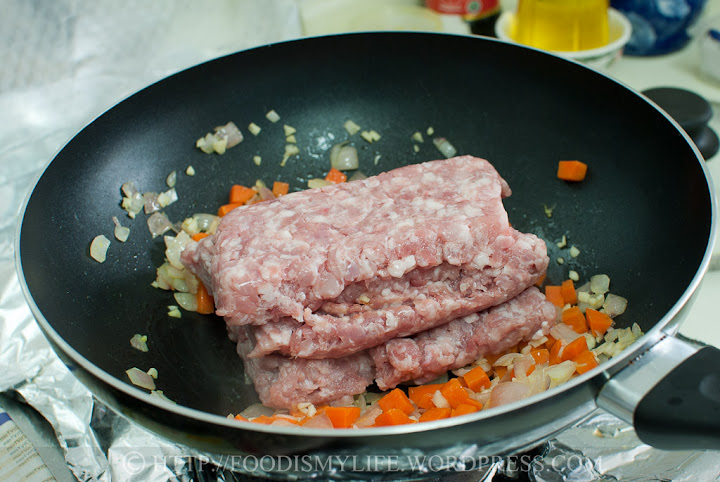 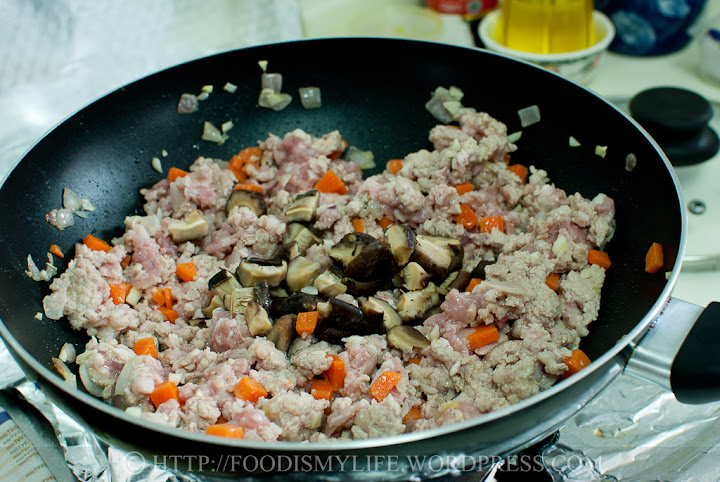 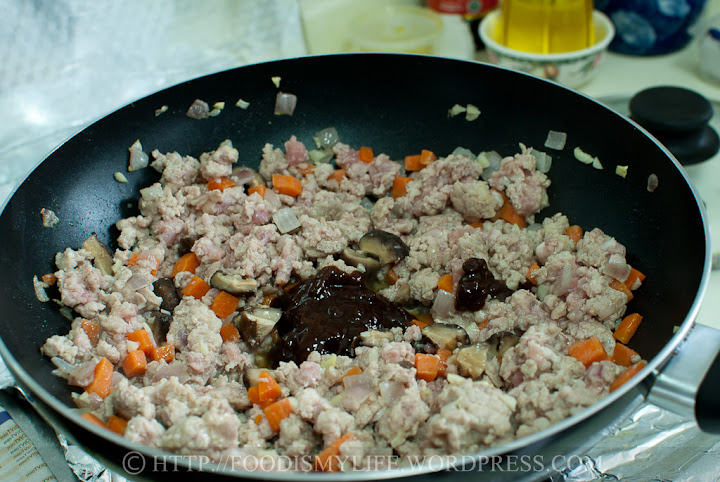 ...and the spicy bean paste. 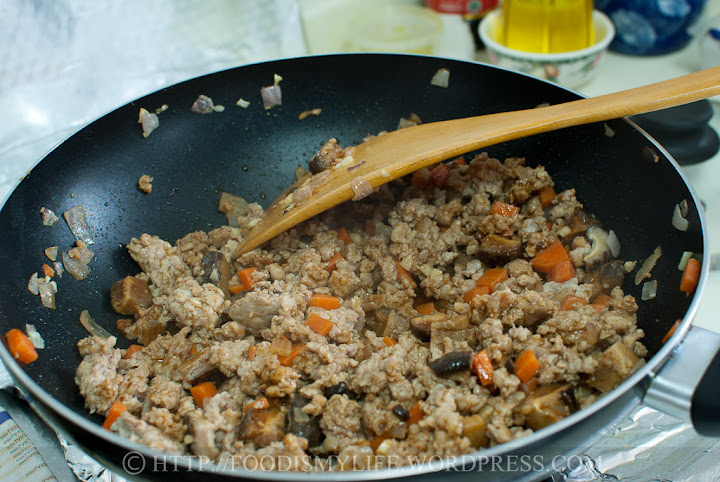 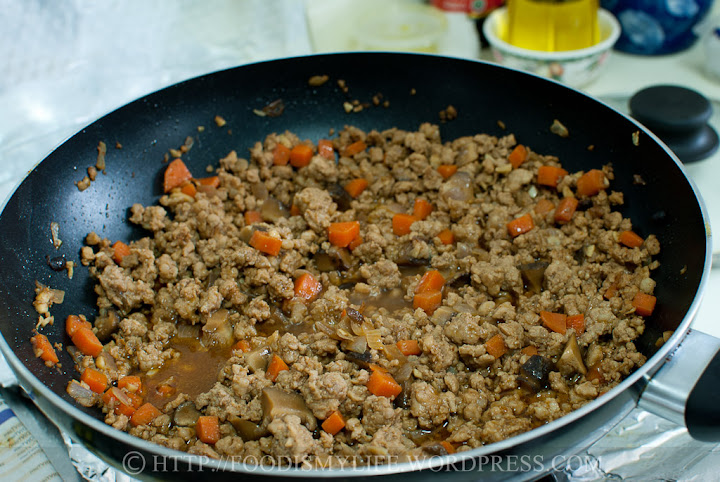 Add in water and simmer till all the flavours meld altogether. 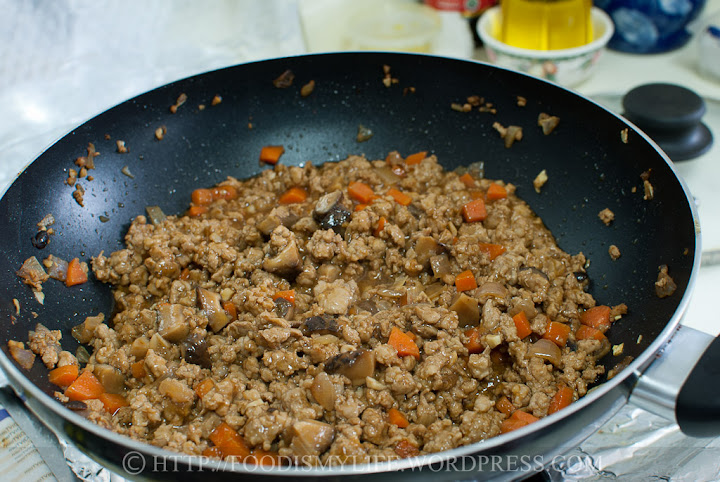 Thicken with a little corn starch solution and it's done!

The sauce should be wetter than the above pictured, I over-cooked it a little 🙁 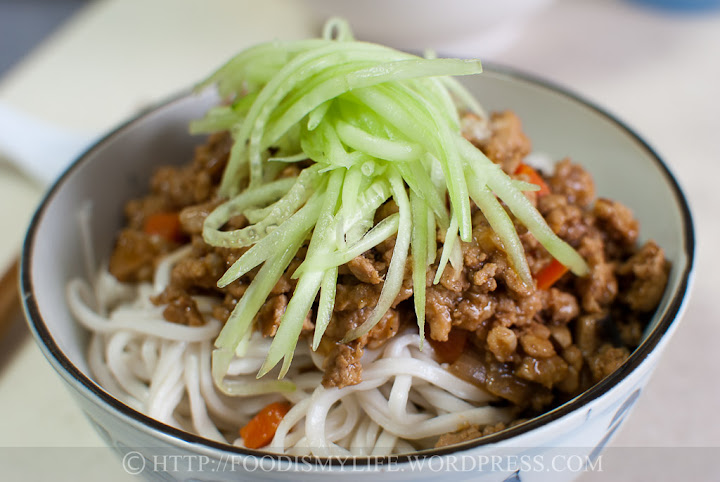 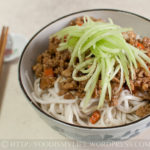 [1] Sweet bean paste/sauce (甜面酱) - this is a thick and dark-colored Chinese sauce made from wheat flour, sugar, salt, and fermented yellow soybeans. As the name suggests, it is a slightly sweet sauce - I like my noodles to be salty, so I omitted the sweet bean paste and used Doubanjiang instead (see next ingredient).

[2] Dou-ban-jiang / Bean paste/sauce (豆瓣酱) - this is a salty paste made from fermented broad beans, soybeans, salt, rice and various other spices. There are two different kinds of bean paste available out there - one is a plain version while the other is the spicy version. The spicy version is known as la dou-ban-jang (辣豆瓣酱). In my recipe, I used the spicy version - not a huge amount is used so the spiciness is quite mild, which was how we liked it. You can use a mixture of sweet bean paste, normal/spicy bean paste.

[3] The bean paste is very salty, so add a little soy sauce at the start first, then adjust as necessary after the simmering.

[4] Chinese black vinegar - the recipe I have uses black vinegar, which I think is not common in other zha jiang mien recipes. X and I are lovers of black vinegar so I actually double/triple the amount used everytime I cook this.

[5] Shiitake mushrooms - in Chinese cuisine, we often use dried shiitake mushrooms instead of fresh ones. Dried mushrooms have a stronger flavour as compared to fresh ones. Soak them in hot water until they are soft, cut and discard the stems then dice them. The water used to soak the mushrooms can be added into the meat sauce, boosting the flavours.

[6] Noodles - traditional noodles used for this dish are fresh flat noodles - like linguine without eggs. Dried ones can be used as well.