After 5 mediocre/semi-failed/failed attempts in making pandan chiffon cakes, I've decided enough is enough! I managed to get well-risen cakes, but the flavour is just lacking - I can't seem to extract out a rich pandan flavour from the leaves, all I get is an overwhelming coconut taste... so until the next pandan cake challenge, I doubt I will be trying it again any time soon, haha! So, in an attempt to finish up the remaining coconut milk and pandan leaves, I decided to make something savoury - coconut-pandan rice. It is a very simple dish, just replace the water used in the cooking of the rice with coconut milk! As the cooked rice didn't look photogenic at all, I decided to fry it with garlic, ham, a little egg, soy sauce, fish sauce and Thai basil (grown by my mom, thanks mom!) to give it some colour and a lot more flavour. It was pretty delicious and I felt a lot better after all the pandan cake failures.

And here are the step-by-step photos! I'm going to submit this to Little Thumbs Up organised by Zoe from Bake for Happy Kids and Mui Mui from My Little Favourites DIY. This month's theme - Pandan - is hosted by Joceline from Butter . Flour & Me. All pandan recipes submitted by other fellow foodies are all linked at this post, do check them out! 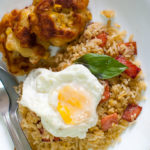