I'm never a fan of baked rice as those I've tasted outside are always a tad too creamy and milky for me - and I can never finish one whole plate by myself. X, on the other hand, loves baked rice so much that I decided to try baking one for him.

While researching for baked rice recipes online, I found so many recipe that uses Campbell's Cream of Mushroom Soup - no doubt it's a great shortcut but I think the resulting baked rice would be too creamy for me (I like chunky mushroom soup, but Campbell's one was just too milky and creamy that I can't stomach it at all, so I know I definitely won't be using it in my baked rice.)

Luckily I found one by Kate on chow.com - and it was perfect! Her original recipe was plain cheesy baked rice but I added in bacon, chicken, mushrooms and carrots for a lip-smacking and cheesy comfort meal with just the right amount of creaminess. A creamy and delicious concoction to die for!

(I'm still not a super fan of baked rice but I do foresee myself making this baked rice more often, it's very delicious and I can add in all kinds of ingredients I want, yum!) On a random side note, I can't believe it's already November! Only a few more weeks left and we're going to celebrate one of everyone's favourite holidays of the year - Christmas! I wish I have more time to experiment new recipes, but work is piling up at such a fast rate that it's getting hard for me to even find time to participate in baking events and churn out blog posts. I think most likely I'll be sticking to my no-fail recipes (I think I'll do a round-up some time soon)!

Back to the step-by-step photos! (As there are lots of photos this time round, I decided to create collages so that's it's less image intensive, enjoy!) Marinate and sear the chicken

I used chicken fillet as they're my preferred choice of cut as compared to chicken breasts. I marinate the chicken in some soy sauce (for some saltiness) and corn flour. Corn flour absorbs the liquid (soy sauce) and helps to keep the meat tender and gives the meat a nice golden colour during searing.

You can marinate the chicken with just salt and black pepper, and then just sear it as well. The chicken doesn't have to be completely cooked as it'll finish cooking in the oven - I just like the nice golden brown colour in the chicken. Get ready all your other ingredients!

Onion, garlic and carrot - the usual culprits in all my dishes. Onion and garlic are essential for flavour. I use red onion but feel free to use yellow onion - I don't think there's much difference between the two of them after they're cooked. I added carrot for the sweetness and for some colour. Would have used something green like peas or broccoli but I don't have them at home...

Bacon - for some smokiness and good-old bacon fat 😉 Feel free to omit and just use olive oil!

Rice - one thing I love about this recipe is I don't have to cook the rice first. This means one less pot to wash and no worries about the amount of cooked rice needed! Fry some bacon to get it crispy and to render the fat, then onion, garlic and carrot goes in with the bacon. Your house will start to smell yummy already. More ingredients are going in!

Mushrooms are then added in and cooked till they have reduced. The rice and butter goes in next. The butter gives a little richness into the dish. The chicken then goes in as well. The liquids and cheese go in next!

I used a combination of chicken stock, milk and cream for the liquids. Use good-quality cheddar cheese for this recipe - not those single slice cheeses (absolutely no!) Cover and bake, top with more cheese and bake again!

Cover with aluminum foil and bake until the rice has absorbed almost all the water. I sprinkled a combination of cheddar, Parmesan cheese and bread crumbs for the topping - the resulting topping is so crispy and cheesy! Underneath the crust is a creamy concoction to die for 😉

I'm going to submit this recipe to Bizzy's Recipe Box #22! 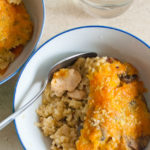 Serves 6 to 8 people
By Jasline N.

Super Naggy: It seems like a long list of ingredients but every one of them is worth the effort and flavour. I love how versatile this recipe is - instead of using chicken, use roasted shredded chicken/turkey. Add in other vegetables like peas and broccoli. Swap out the bacon and use olive oil... Or just bake it plain (refer to original recipe) and serve it with some yummy steaks and mushroom sauce. Play with the recipe, use your favourite ingredients and let me know what's the killer concoction for you!