Coq Au Vin is a traditional French dish originating from the Burgundy region. Coq Au Vin, loosely translated, it means Cock (Chicken) With Wine. The traditional dish consists of chicken marinated in red wine and herbs, seared in lardon fat, and finally braised in wine with mushrooms and sometimes garlic.

Some says the origin of this dish came from Julius Caesar's cook, when he used an old turkey gifted by the Gauls to whip up this amazing dish to serve back to the Gauls. There was another version that in the past, as French people often reared hens and roosters in their household, when the roosters grew old and could not perform their duties anymore, the roosters would be slaughtered and not wanting to waste their tough meat, the French came up with an ingenious idea to braise the rooster meat in wine to soften the meat. Delia's recipe deviated from the traditional recipe quite a bit as there was no marination involved, and lardon has been substituted with bacon. However, without the marination, making this dish is a lot faster as it can be completed in about 1 ½ hours (I spent some time taking the step-by-step photos so I took about 2 hours).

The overall dish is a very hearty and comforting dish, perfect for cold nights, so it's a little odd when X and I were eating it for lunch, not to mention we were drinking the leftover red wine in a hot summer-ish afternoon... Nevertheless, the dish is very interesting - it has an intense red wine taste that I'm not sure everyone will be fond of. I'm okay with the taste but X felt that there was a slight bitter after-taste, not sure if it's how the dish is supposed to taste like... any ideas? Otherwise I've got to order this in a restaurant and try it out. For those who are interested in trying this French classic, here's how! I'm submitting this to Cook Like A Star hosted by Zoe from Bake for Happy Kids, Baby Sumo from Eat your heart out and Mich from Piece of Cake. Do click on the froggie below to see all other recipe attempts by other foodies!

I'm also submitting this to Bizzy Bakes, hosted by Chaya! Do click here to see the wide variety of recipes that bloggers from all over the world have submitted! 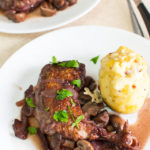 P.S. I served mine with some delicious Twice-Baked Potatoes, here's a sneak peek!